A-level results day inevitably prompts mixed feelings in me.  Feelings of nostalgia and regret.  It's eighteen years since I flunked my A-levels, denying me my first choice university (Keele) and sending me off to Edge Hill in Ormskirk instead.  At the time I was distraught and unhappy.  Now I see it as a blessing.  I've been to Keele, and it's a massive sucky hole of misery in the middle of nowhere (highest suicide rate among all UK universities, I believe).  Edge Hill was small enough for you to get to know people, to have fun and not be lost, and it had that wonderful Merseyrail line to take me off to Liverpool.

I fell in love with Liverpool, I fell in love with the BF, I fell in love with some of the best friends I've ever known, all while I was at Edge Hill.  I didn't make it to my first choice but I had a hell of a good time anyway.  The best time of my life, in fact; everyone should be a student.  It's three years of being an adult, but without any responsibility.  You get to drink and have sex and stay out all night and eat junk food, but you don't have work in the morning or a mortgage or kids or anything to drag you down.  It's half a life away - literally - but it still makes me smile.  My only regret is the one that's beautifully articulated in the song I Wish I Could Go Back to College, from Avenue Q: "I wish that I'd taken more pictures." 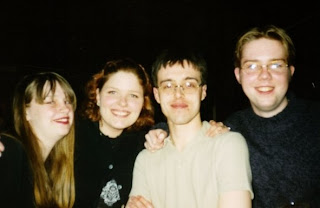 For some reason Edge Hill didn't shut up shop after I graduated; in fact it just grew and grew, like a giant academic fungus.  The campus is enormous now; what were sports pitches and the Rose Garden when I was there are now giant teaching centres with acronym names.  The boiler room has been replaced by a huge student complex with coffee shops and breakout areas - we had the bar and a vending machine and the Terrace Cafe, and you'd only go there if you wanted something to eat and you were really desperate.  It's a behemoth.  In a way it's outgrown Ormskirk itself; this tiny market town now has thousands of youths streaming through it for ten months a year.

Last week I went back to Ormskirk to meet Jennie (second from left above).  We took her adorable children Adam and Joy to the park, went on the swings, had a coffee, bitched about life.  The usual stuff 36 year olds do.  Coronation Park was on the way back to our student house in Cottage Lane; it was strange for us to be there without being just a little bit drunk.

At the station there was a real indication that Edge Hill dominates the town.  For many years, Ormskirk's Attractive Local Feature board was this: 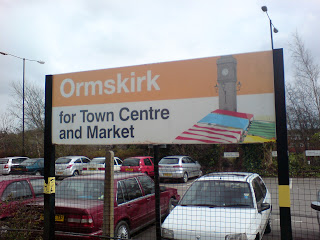 Pretty typical for a small country town.  My latest visit revealed that the ALF had changed: 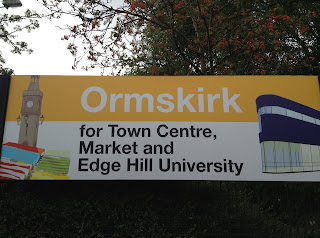 This pleases me for a number of reasons.  Firstly, I'm glad that Merseytravel and Merseyrail are still doing the ALFs; I was worried they'd been phased out.  Plus they kept the old colour scheme.  And of course I'm just happy to see Edge Hill getting some recognition, even if they picked a pretty bland building to represent the university.  I suppose they want to look all "modern" and "thrusting", but that building could be anywhere.  They should have used a picture of my beloved LRC (Learning Resource Centre, now unimaginatively renamed the "Library"), or the Venue, or a drunken student getting his stomach pumped after failing to handle all the alcohol in the "Around the World in Forest Court" booze crawl.  Next time, come to me for advice. 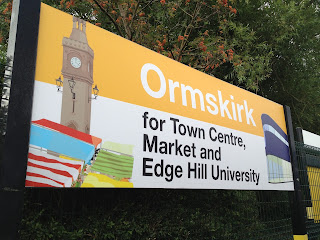 Now I'm off to have a little nostalgia fest: drinking cheap lager while I listen to Space and Gina G and Echobelly and Alisha's Attic and Terrorvision (Whales and dolphins, whales and dolphins, yeah!) and missing the old days.
Posted by Scott Willison at 12:56

I love that picture of Scott the student. You look about 14!

I thought you looked familiar. From an Edge Hill '95 graduate (and whose 1st choice was Keele too).

If you graduated in '95 you was leaving just as I arrived. Unless you came back.