It's only technically Leeds City station.  There used to be a Central station as well, up until the 1960s, but that was rationalised out of existence.  Now there's just one, enormous, colossal station straddling the centre of Leeds, and it's wonderful.

I'm not sure why I like Leeds station so much.  Perhaps its sheer size is just pleasing to me.  There are seventeen platforms, most of which are through platforms.  That immediately marks it out as different to your usual big-city station.  Leeds' position at the virtual centre of the British Isles means that it's the perfect place for lines to cross and pass through.  East-west, north-south, trains are constantly pouring through the centre of the station.  It gives it an exciting vibrancy.  A terminus will inevitably have trains sitting quietly, waiting their turn, but Leeds seems to always be on the move.  You can actually see the trains, too, unlike at Birmingham New Street, which hides them away from sight like a dirty secret. 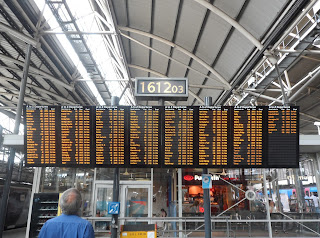 The building has evolved and expanded numerous times over the decades.  The over-reaching roof, which has a distinctive design I don't remember seeing anywhere else in the UK, allows plenty of natural light to stream down.  It dates from 2002, when the station was pretty much torn apart and rebuilt. 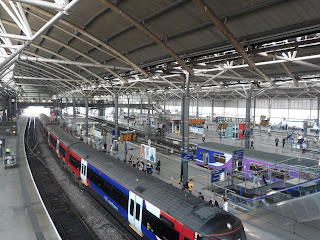 You get to and from the platforms comes via an incredibly wide overbridge, accessed via escalators and stairs.  The escalators, in particular, are a joy; they have a blue neon light around them, which makes them a little bit Blade Runner.  My only complaint is that there are only up escalators; you have to walk down stairs.  That annoys me.  Yes, it saves money, and yes, it means there's up and down access if the escalators break or if there's a fire, but it feels lazy.  Up top, the overbridge is so wide it has its own branch of Starbucks. 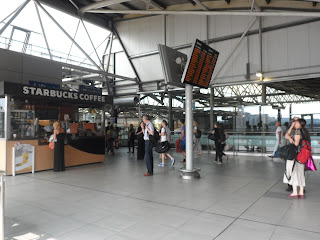 You can also take in the magnificent views of... some tracks.  It might not be the Duomo di Firenze or the Hanging Gardens of Babylon, but I should imagine it's incredibly thrilling if you're a trainspotter and it's raining.  You can just stand there with a pair of binoculars and you don't even need to wear your anorak. 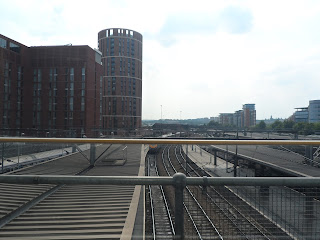 At the far end of the bridge there's a bank of escalators to take you down to the main concourse, and also to the terminal platforms where the local trains tend to stop.  This is where you can see the divide between both parts of the station.  Much like Victoria in London, there were two stations originally; Leeds Wellington, built by the Midland Railway, and Leeds New station, which belonged to the North Eastern and London & North Western Joint Railway company.  As was typical the stations were operated as two separate beings until in 1938 the whole thing was finally unified with a joint concourse - but I'll get to that. 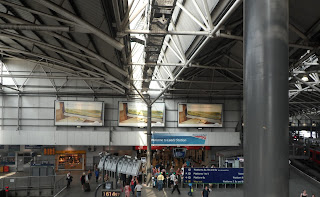 That concourse proved inadequate, so in 1967 the "New" part of the station was demolished and rebuilt with shops and facilities and an ugly tower block above.  This is the worst part of the station, by quite some way, and it's unfortunate that this is the part every single passenger has to pass through. 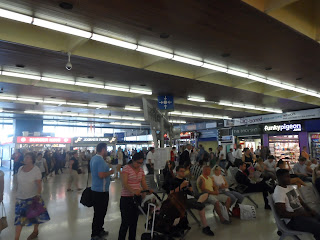 Incidentally, did you know that Funky Pigeon (as seen above) is actually owned by WH Smith?  Their decline into a tacky, shameful shadow of their former self continues apace.

This is the bit that gives railway stations a bad name - it's unfriendly, it's badly lit, it's far too small, and it empties you out onto a grim bit of tarmac for taxis and buses.  It's like Euston or the old King's Cross, a clunky bit of 1960s brutalism without any charm.  Fortunately, having made the rest of the station so great, Network Rail are now working with Bruntwood (the owners of the aforementioned terrible office block) to do something about it.  They want to bring natural light into this part of the station as well, and to help pay for it, they've suggested a mezzanine of shops could also be constructed: 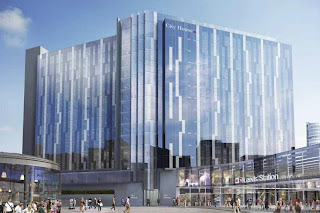 Note the double height entrance to the station, and the glass wall.

That's all the future though, and Leeds station also has a wonderful relic of its past.  Remember that 1938 concourse I mentioned?  After the new, south concourse was built in the 1960s, the old one was deemed surplus to requirements and was used as a car park for thirty years.  This is the point where we thank British Rail for its occasional lack of imagination and innovation, because it meant they left it to rot rather than knocking it down.  There was a proposal to use it in 1989, and thank God that failed.  The 2002 refurbishment brought it back into use and it's a fantastic space. 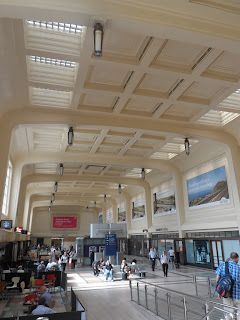 Beautifully curved concrete soars above your head to pretty skylights and artful lighting columns.  Light streams in through double-height windows at a high level.  The contrast with the old/new concourse is stark. 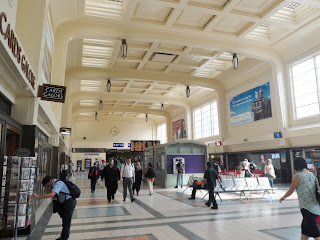 Okay, it's basically a shopping mall now; all the customer facilities are still in the 1967 building.  It's been done with total respect for the architecture though, and McDonalds and KFC haven't been allowed to plaster their logos over every available surface.  There's also direct access to the Queens Hotel; the Art Deco station hotel was constructed at the same time as the concourse. 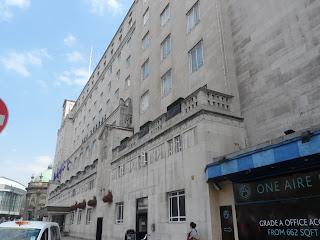 I walked through to the City Square exit, where there was one final delight.  A circular lobby area, with a gorgeous central pillar.  It was the start of the rush hour, and people were storming past, and I wanted to stop them: "look!  Look what you're ignoring in your rush for your train!" 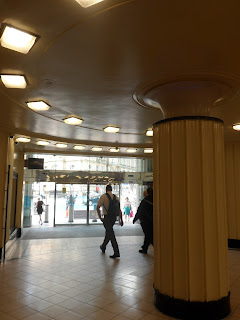 It's still evolving, even today.  HS2 will bring a whole new terminus, Leeds New Lane; an elevated walkway with travelators will carry pedestrians to the existing station.  New developments around the canal have meant that there are plans for a new pedestrian exit to the south of the station.  Work was due to start this summer, but there's been a last minute legal hitch as a bunch of disabled campaigners have demanded a drop off area specifically for less-able users.  I'm usually violently pro increased access to stations, but

(a) the new exit is a pedestrian only exit because of the narrow street it empties out into; no-one will be allowed to stop outside

(c) the new entrance will still have lifts for disabled users, so it's not as though it's entirely closed off to them

and (d) consultation for this new ticket hall started in 2010 - why didn't you bring it up then? 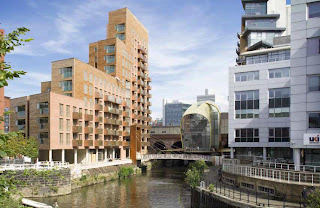 Leeds station works.  It's a mish-mash of different styles, architects and technologies; it's 150 years of evolution and progress.  It could be a mess, but instead it's a quietly, efficiently marvellous space.  It's a station that sees millions of people every year and I hope that each one - even the most jaded commuter - spends a couple of moments just taking in how brilliant it all is. 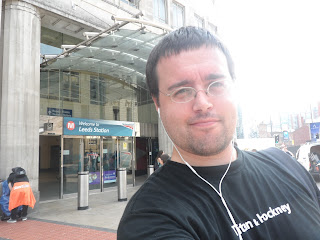 Is it just me that thinks this disability discrimination act has now gone too far? It seems like these days it is the 'make life hell for anyone who isn't disabled' act!

I love the old concourse and yes it's a busy station with trains to a lot of places. But I'm sorry but I'm going to have to disagree I'm afraid - I don't like the station. Admittedly I don't really remember the old station so it may well be a major improvement on it.

Good bits are there is lots of circulation space, information is good, it's clean and it generally functions quite well.

However there are also bad points. I think it is dreadfully bland. There is very little natural light - only a small strip along the centre of the roof actually has any glass, the rest is metal. To me it always feels like a cold, dark warehouse. I always hope the train I'm wanting to catch will go from one of the bay platforms where I can stand in the sun rather than under that roof. Many stations with an all over roof do it well, with plenty of natural light (e.g. Darlington, York, Bristol Temple Meads, London Waterloo, Bournemouth) but I don't think Leeds is one of them. Sorry.