Liverpool Central finally opened its Northern Line platforms last week.  I thought about visiting last Friday, when I was in the city for Skyfall, but the sheer amazingness of the film left me light headed.  I didn't want to risk over stimulation by going to a refurbished Central as well.

Instead I waited until yesterday, because I was out in the city with my friend Jennie and her adorable children Adam and Joy.  We had a day of eating, art and shopping, and then headed back to Central so she could get her Northern Line train home.

There was an immediate problem - a queue for the lift.  I've never used the platform lifts at Central, so I hadn't realised what a tiny, confined space it sat in.  I also didn't realise just how popular it was.  The queue of parents with buggies and elderly women stretched right round the corner and into the main concourse.  It was also showing signs of fatigue already: clearly someone with a wayward pram had crashed into the wall and taken off a big chunk of yellow plastic.  I'll be curious to know when that finally gets fixed. 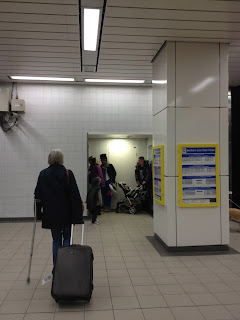 Eventually we managed to wheel Joy's pushchair inside the lift and whizzed down to the platform.  The first impression is how bright it is.  The Northern Line platforms are Victorian in origin, and there was always a cavern-like feel to the space.  The water running down the walls didn't help.  Those corrugated metal coverings are still trackside, but on the island platform itself, everywhere is white. 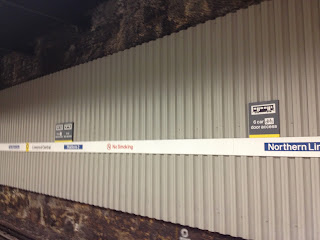 It means that the centre of the station somehow glows and seems even brighter.

A new circulating space has been carved out under the escalators by moving some of the mechanics; it means that the middle of the platform is much more open and can accommodate more waiting passengers.  With the new seating spaces upstairs, hopefully this will allow for more desperately-needed breathing room - though it seems the passengers haven't modified their waiting patterns yet.  They were still mainly hanging around the long tongue at the foot of the escalators, instead of moving into the new wide open area. 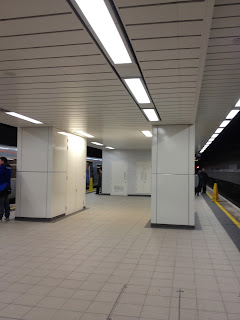 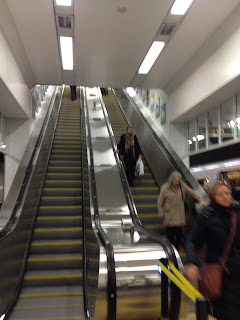 Disappointingly, there are still only three escalators.  The steps have been left in the fourth space.  To me, this means that there's still a "right" end of the station and a "wrong" end; one where it's easy to get up and down and another where it's more difficult.  I guess £20 million only buys you so much. 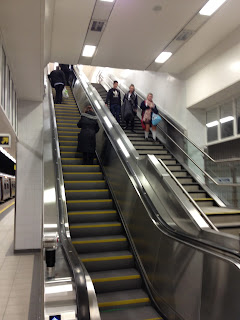 I headed for the Wirral Line escalator.  I'm assuming that there's still work to be done, because there are no signs telling you that's what it is; it's just a way down into the unknown at the moment.  Incidentally, as I took the pic below, the girl on the left was having a blazing row with her boyfriend, and was smacking him quite vigorously round the head; she saw me with my cameraphone and shouted "what's he taking a picture of?".  I made a hasty exit. 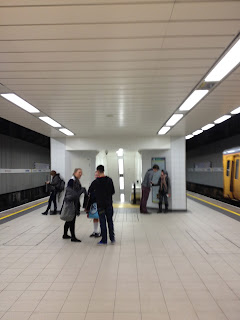 A couple of months ago, I was rapturous about the new look Wirral Line platforms.  Now they're complete, I'm going to have to register a couple of complaints.

First of all, they've taken away the line diagram on the tunnel wall.  I understand there are maps and line diagrams elsewhere but still, this was a useful addition to have. 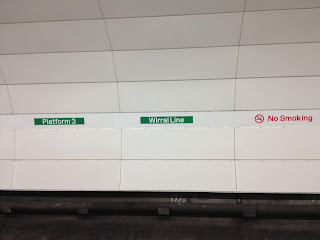 The second complaint is regarding the signs.  A few years ago the Colour Tsars introduced new yellow and grey signs across the Underground stations.  There were line diagrams, exit signs, and maps of the station.  These new signs have since been rolled out across the network - any time there's a new set of works (like at Hooton for example) the grey and yellow signs are in evidence.

I didn't mind these signs making their presence felt.  What I object to now that Central's been done up is that the rest of them haven't been changed as well. 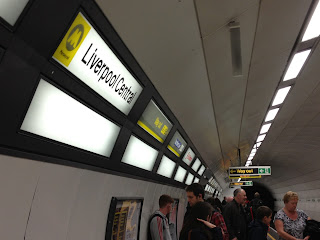 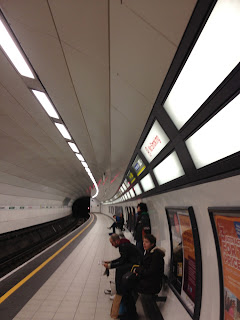 Am I overreacting?  Being too OCD, too picky?  Absolutely.  It's tiny things like that which niggle.  It's little flaws that make you think that someone doesn't care.  I wanted to endorse the new look station wholeheartedly but I can't.  That stops me from declaring Liverpool Central an entirely flawless success.  That and the escalator thing.  It's close, but not quite there.

It doesn't stop me from looking forward to what they're going to with James Street though.
Posted by Scott Willison at 11:30

the actual reason for lack of a 4th escalator at Liverpool Central is operational and in order to comply with fire regulations.

In the event of a power failure, the 3 escalators would obviously stop working, and the risk assessment state that customers should not be allowed to walk down a stationary escalator because they are fairly steep.

If the escalators fail on the Wirral Line, the platform must be closed, which obviously is disruptive, but a public staircase is not practical, (although one does exist that goes right from top to bottom, in the motor room!).