I've somehow managed to write three blog posts about York without ever talking about the station. 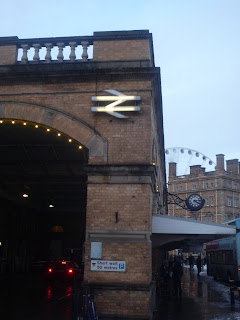 York was opened in 1877 and it is one of the finest railway stations you could ever hope to travel through.  The North Eastern Railway poured money, design brilliance and elegance into the building, crafting every sinewy curve and arch with love and pride. 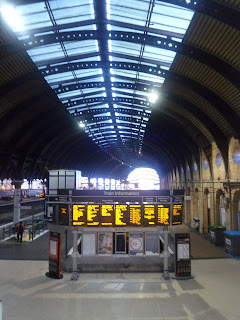 Stand on the central footbridge and marvel at the high, clear glass roofs, the stone buttresses dotted with circular portholes to let steam and smoke drift outwards.  It's spacious and yet doesn't feel empty; it's still filled with the throbbing, pounding pulse of a mainline railway station, the urgency and excitement and tension.

Look down at that bridge and appreciate the way it moves.  It's a later addition, built in 1938, and you can sense the hand of a modern architect bringing Art Deco into this space.  The span is accessed by symmetrical staircases at each end, curving upwards, with soft wooden handrails to guide you.  Head across it and your eye is drawn to the former signal box, now a coffee shop, but placed within the shape of the bridge.  The signalmen must have loved being at the centre of all the business of the station. 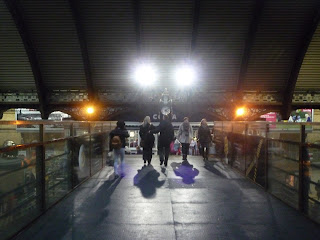 And at the head of the bridge, a wonderful, enormous clock, intricate and elaborate, one of a dozen clocks that are scattered throughout the station (and which are all in perfect working order).  Heraldic arms remind you that the railway station was to the Victorians what a castle was in Medieval times; the centrepiece, the fulcrum of a city, the dominant force. 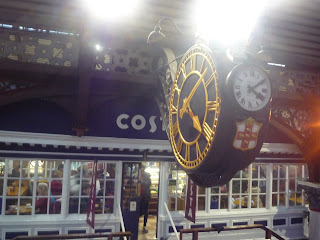 The concourse below is actually a new addition, put in during the Eighties by removing some of the tracks.  New facilities - cash machines, ticket office, a florist - filled the space but they pay deference to the building around them.  There's a restored North Eastern Railways map, inlaid in tile on the wall; look closely and you can see that not all the tiles are original - one was added at a later date: 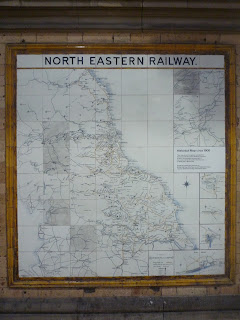 A corridor leads you to another concourse area, with a small, dignified memorial to the men killed in a bomb at the station during the war.  The roof looks like a banqueting hall; that castle theme again.  Tourists hang around here, trying to work out how to get into the city, to the museums, to the history, and somehow never taking in the space and the inspiration around them. 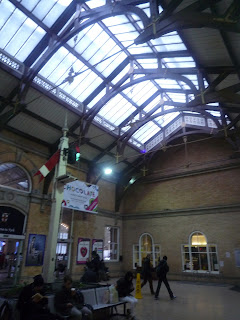 The taxi rank is under a massive stone porte-cochere, bigger and prouder than any other you've seen, built to take the finest of carriages and maintain the ladies' hemlines at all time.  The waiting Hondas and Vauxhalls seem unworthy. 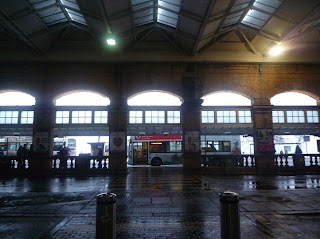 Back inside you appreciate that passageway even more; the narrow space makes the station opening up before you that much more epic. 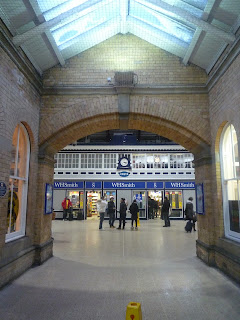 I love York station unreservedly, unashamedly, wholeheartedly.  It's an icon and a wonder.  I haven't even mentioned the tiny, elaborately decorated real ale pub (which I haven't yet visited - another day, another blog), the white Yorkshire roses in the supports, the artisan bakery on platform 8... there's too much to say.  I wandered around it in an adoring daze, utterly bewitched, 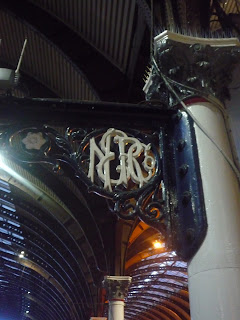 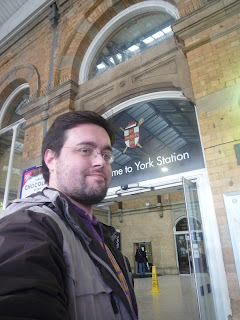 Email ThisBlogThis!Share to TwitterShare to FacebookShare to Pinterest
Labels: something really rather wonderful, York

Fantastic stuff. You've made me realise I've never been to the station OR the railway museum. *adds to list*

Return tickets are less than £60 at East Coast trains...