A Bit of Brum Fun

It's very easy to be rude about Birmingham.  Very easy.  It's very easy to pick at it, a vulture chewing at decayed carrion.  I've decided to be nice.  I will therefore only say positive things about the city in the following blog.

I was in Birmingham thanks to London Midland's Great Escape offer, a £15 ticket that lets you travel anywhere on their trains.  This would have been a golden opportunity to collect some of the stations on the map if London Midland went anywhere near Northern Rail's empire; the only real point of connection is Crewe, and I've been there way too many times in my life.  Since Ian was coming up north, and Robert and I were heading south, we decided to meet at the halfway point: the West Midlands. 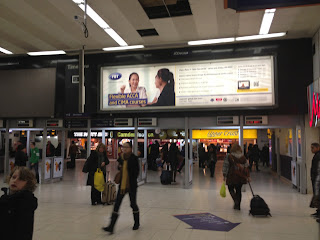 I'd never been to New Street before.  I'd been through it, peering out of the train windows at the dark underbelly of the station, but I'd never actually alighted.  We were in a terminating bay so there was a long walk down busy platforms to the staircase (the escalator was out of action); fortunately the users of the station were fully aware of the "stay on the right" rule, allowing the bedraggled looking teenage girl to clunk her suitcase down the steps. 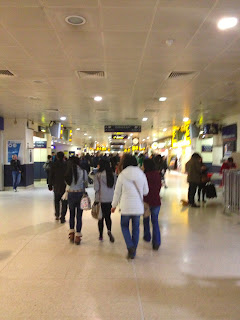 New Street is, basically, a smaller version of Euston: white tiles, false ceilings, nowhere to sit (stop it!  Be nice! - Ed).  In a weird way it reminded me of the Grand Central Terminal in New York - no, bear with me.  In both stations, the trains are squirreled away beneath the streets while the concourse sits above them, the idea being that passengers while away the hours up top until their train is ready rather than sitting on the platform.  Of course, Grand Central Terminal is a Beaux-Arts masterpiece where you can gorge yourself at the legendary Oyster Bar, while New Street is a building site with an Upper Crust baguette shop, but the principle is the same.

We met up with Ian outside the Pallasades shopping arcade and headed out onto the streets.  New Street is currently undergoing a massive rebuilding project to turn it into a mirrored blob; it would therefore be totally unfair of me to refer to it as a soulless void that sucks life and joy from all who enter it.  I'll have to come back when it is finished in 2014 and say it then.

We found a spot for the sign photo.  Some exuberant local girls tried to photobomb in the background, but one glance from Ian and they backed away.  He might seem like a jolly, polite young man, but the look he shot at those women was pure acid; it chilled my soul. 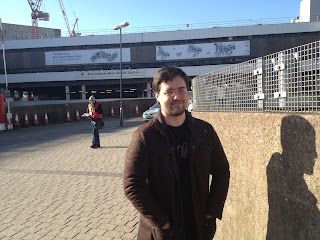 Incidentally that Big Issue seller said he really liked my 007 t-shirt.  I wouldn't normally take fashion advice from the dispossessed, but I'll take any compliment I can get.

We wandered through the Bull Ring, which is a large shopping centre - that's the main thing I can say about it.  The dotty Selfridges is interesting enough, but I don't like the way the design just stops at the brick wall; it's too artificial.  The building looks organic - it feels like it should flow; instead it just looks tacked on. 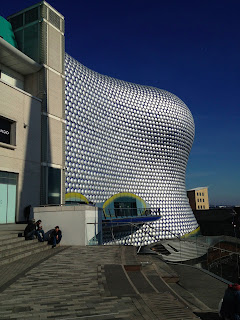 After a brief pause so Robert could have a free pee in the shopping centre toilets (he'd absolutely refused to pay the 30p for the ones at New Street - he claimed it was for principled reasons, but I think he's just cheap) we went to Moor Street station.  Which is wonderful. 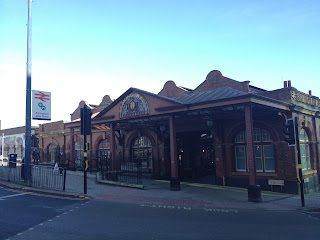 I'm just going to sigh lovingly for a bit.  Don't mind me. 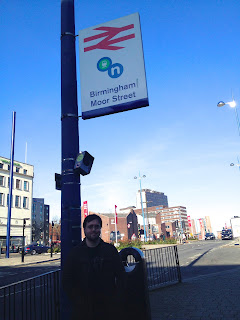 Birmingham Moor Street is one of the rare good stories to have come out of privatisation.  Under British Rail, the station was ignored, platforms were closed, and it was more or less abandoned to its fate.  Chiltern Railways, however, wanted to run a service from London to Birmingham, and they picked Moor Street as the terminus.  They not only brought it back to life, they made it better than it had ever been. 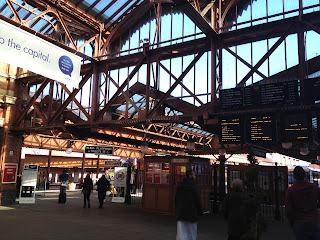 It's all ironwork and wood and glass; a muted crystal palace.  Rather than daub it with their corporate colours, Chiltern Railways have used heritage fonts and signage to make Moor Street a classy, elegant time capsule.  Shops and cafes are marked with triangular sign boards rather than glowing neon. 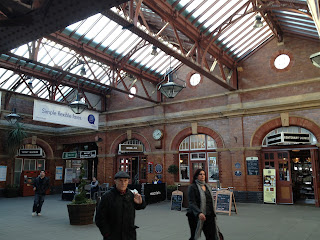 I don't believe in preservation just because something's old; I don't agree with listing buildings that don't work.  Where there is a glorious architectural gem, however, I want it to be enhanced and preserved and made real.  Moor Street looks like a 1930s terminus, but it works in the 21st century; it's a proper, effective train station.

It was lunchtime so we headed for the Centenary Lounge, a wonderfully preserved 1930s cafe on the concourse for coffee and a sandwich. 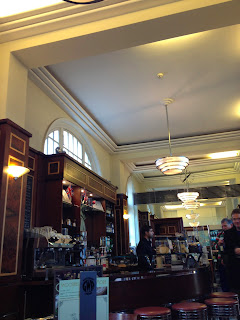 If it was a proper pre-war experience, of course, it would be staffed by a buxom woman with a permanently sour face; she'd dole out stewed tea from an urn and maybe a fly-battered scone if you're lucky.  This is the 21st century though, and so the Gaggia was operated by a smiling Asian man and there were paninis and delicate pastries available. 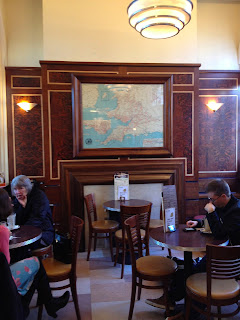 My only disappointment was entirely my fault.  The cafe sells GWR branded cutlery and crockery.  It also uses this crockery for service but because I'd ordered a latte, I got it in a boring glass.  I lovingly stroked the saucer instead. 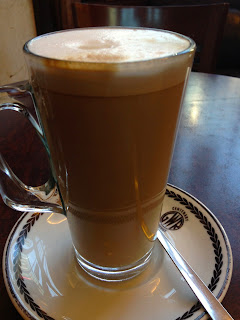 Our train only went one stop to Snow Hill.  The contrast was stark.  Instead of open, sunshine filled platforms we entered a dark space underneath a multi-storey car park.  There used to be a much better, much larger station here, until Beeching intervened, and this was the 1980s rebuild. 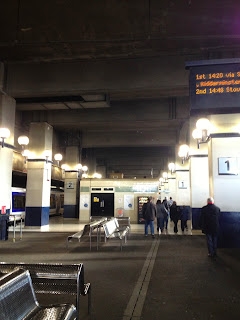 There was some artwork.  At least, I assumed it was artwork; there was nothing to tell me who it was by, or why it was there.  Maybe it was one of those out-of-work actors who spray paint themselves and beg for change; if so he was really good, because he didn't move once. 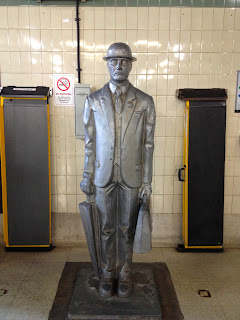 Up top, the ticket hall had some remnants of the old Snow Hill.  Rich green tiles lined the walls, peppered with commemorative signs, signs for refurbishments, for reopenings, for visits by MPs and Right Honourables. 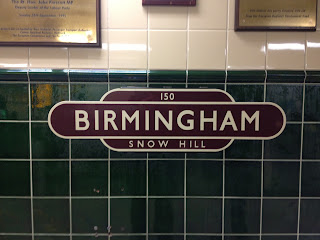 And hidden in a corner - the station cat, a welcome moment of whimsy: 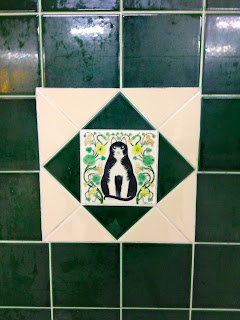 I could say an awful lot about Snow Hill station, about its architecture, its location, its signage, but I promised right at the start of this blog to say nice things and so I will just keep quiet.  I will say that I'm glad they reopened it, because it's better to have more stations, not less; I will also say I think Snow Hill is a very pretty name.

Oh dear.  All this pleasantness is getting to be a strain.  I think I will have to go and have a lie down.  It's just not in my nature to be this nice, and I still haven't written about the trams.  I suspect my newfound saintliness will have faded away to nothing by then. 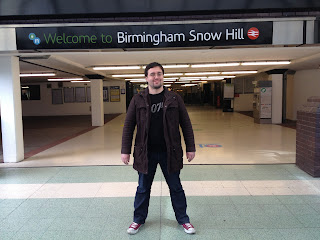 The then newly reopened Snow Hill station was awarded the 'worst building in Birmingham' award by viewers of BBC Midlands Today in 1987. As you can imagine, the competition was pretty fierce.