You've Got A Friend In Me

I'm a very good friend.  A wonderful, caring, lovely friend.  If you ask for my opinion, I'll gladly give it.  If you want someone to go to the pub with, I'm there.  If your boyfriend dumps you, I'll take your side and say all those rude things about him I'd kept quiet about.  And I'll never say nasty things to you, only ever behind your back, where you won't hear them.  I'm great. 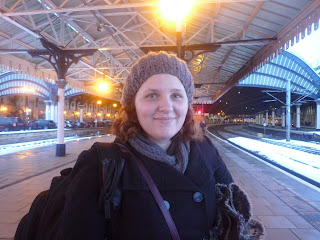 This is my friend Jennie.  We've known each other for years, and she's now a lecturer, who occasionally has to travel all over the country to hold tutorials.  When she told me that she was dreading the long trip cross country to York for a session, I volunteered to accompany her.  This is because I'm basically a fantastic person.

NO I DIDN'T GO JUST SO I COULD COLLECT SOME STATIONS HOW DARE YOU.

After tea and toast in the lovely Me and Mrs Fisher cafe, where I derived great pleasure in listening to the ladies at the next table talk about internet dating ("He said he was in an open relationship, but I doubt he's told his wife.  It was only a fling anyway"), Jennie went off to the University and headed for a bus stop.  I was slightly hampered by York City Council's decision to not grit or clear the pavements; the trudging of Saturday afternoon shoppers had turned the snow into thick grey slush.  It was only a ten minute walk but when I reached the bus stand I had soaking ankles and damp socks inside my boots.  They wouldn't dry out all day. 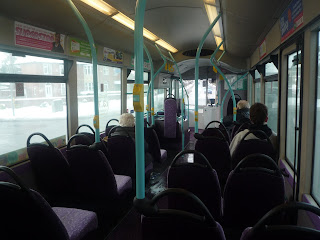 I was headed for Poppleton, a village just outside the city which sounded like it had escaped from Winnie the Pooh.  I was able to watch the slow evolution of York as we drove away from the centre.  It's like a series of tree rings, each one marked by a particular era in its architecture and layout - the medieval core, surrounded by Georgian grandeur, followed by Victorian villas and 1930s suburbs.  Finally there were 21st century boxes, and we were crossing the ring road.

The bus dropped us in Nether Poppleton at 1:19, four minutes after my train had left.  It meant I had an hour to kill.  What to do? 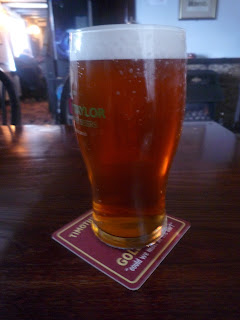 It wasn't my fault.  The bus dropped us off right outside the Lord Nelson; it would have been rude not to.  I had a quick pint in the silent atmosphere of the village local.  There was no music, no tv blaring, just a couple of pensioners eating fish and chips in the "restaurant" part, not talking, just staring slightly past each other.  The only other patron was a young lad with blonde hair nursing a coke; he kept jumping up and peering through the window, nervously waiting for someone.  The air was thick with the fug of a deep fat fryer.  The dart board had a hand-written sign saying that flights were available for 40p at the bar; I could see them in a biscuit tin marked FLIGHTS in permanent marker.  It was a snug little place, a bit threadbare, not at all glamorous, but pleasant and warm.

After a quick pee in the tiny toilet I ventured outside.  The paths here weren't even sludge, just trodden down snow, and I took care not to slip, while being aware that I had to get to the other end of the village for the train station.  Main Street curled round a corner, brushing up against the Ouse, a bench ready for summer. 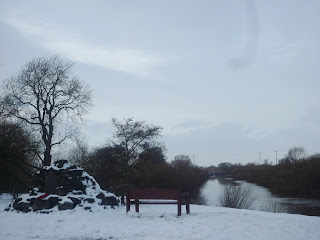 I was following a family of three, towing a sledge.  Mum pushed on at the front, briskly calling back instructions over her shoulder - "watch the path here!  Don't run!".  Dad was pulling the sledge, a little skip in his step, and the kid was resolutely unamused.  He was a porky little fellow, and I guessed that this was his parents' idea, to get him away from his Nintendo XBoxStation.  Now he was making everyone regret it, moaning about the cold and the wet.  The pink sledge probably didn't help. 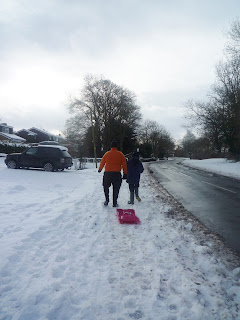 Poppleton was really quite lovely.  A delicate stream, almost frozen, ran between trees and past houses; soft white gardens lead up to well-maintained porches.  The snow absorbed the sound, so all I could hear was the trudge of my boots.  There was a library, and a community centre; a sports field and a surgery. 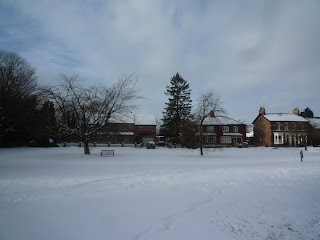 I was already having good thoughts about the village, and that was before I hit Upper Poppleton, the second half of the settlement.  Then it developed into full blown love.  A wide open village green was bisected by the main road, looked over by a war memorial and church.  A pub, a post office, a red telephone box, and in the centre of the green, an actual Maypole.  It's the first time I've ever seen one for real (the one put up in the school hall at Juniors' doesn't count) and I was surprised by how tall it was, a stripy rocket bursting into the grey skies. 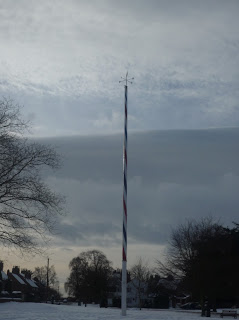 I passed the kids leaving the general store with a twist of sweets clutched in their hand and pushed on out of the village.  I only slipped once, but managed to stop myself from doing a complete somersault. 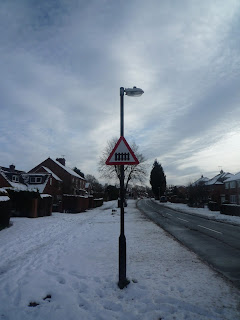 Poppleton station was a wonderful surprise in many way.  The station building was no longer in railway use, but they'd done something clever with it: glassing over part of the platform so that it created a sort of conservatory waiting area. 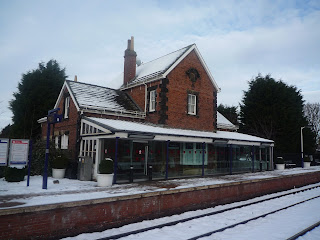 I've never seen this done before.  It's a brilliant idea.  It provides a secure, architecturally pleasing space for waiting, as well as some cycle racks.  It means a station structure isn't left to rot.  It'd be better if there was a ticket office in there (or even a ticket machine) but still - well done Northern Rail. 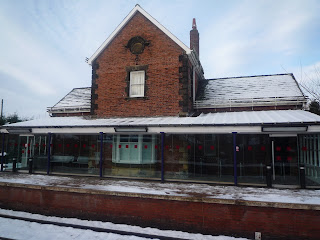 As the sign above indicated, there's a level crossing at Poppleton.  It's not got flashing orange lights or a siren or even automatic barriers.  Here, they do it old school. 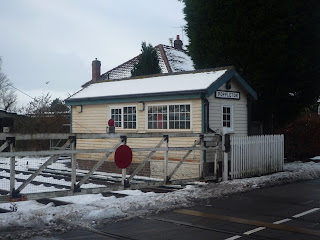 A signal cabin.  Gates that have to be wheeled across the track, gates that I've never seen for real in my life, only in my Hornby railway set when I was a child.  When the time came, the grey haired signal man pushed them into place by hand to block the road.  There was something so quietly civilised about it. 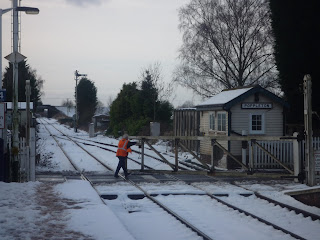 Before I got my train, however, I had time to take a look at Poppleton's other claim to fame.  There was a time when railway companies had plots of land devoted to horticulture - growing flowers for stations, plants to shore up embankments.  British Rail slowly reduced the reliance on these, and privatisation killed them off completely; it's easier and cheaper to simply buy flowers in bulk. 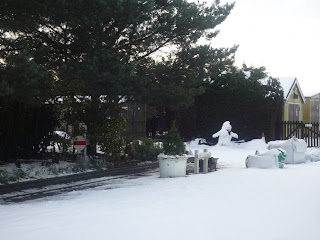 At Poppleton, they've reversed this trend.  The local community have reclaimed the abandoned railway gardens and are slowly resurrecting them.  Their excellent website shows how these neglected patches of land, the greenhouses and sheds are now being turned into facilities for the whole village.  The coal yard alongside the station even retains an old wagon. 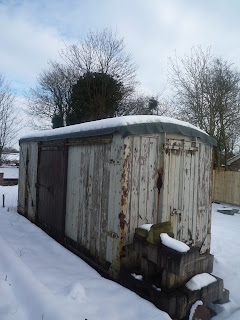 It's a wonderful idea, well executed, and my only regret was that I was seeing it at the very worst time.  I imagine it's a joy to see in summer.  I left Poppleton full of optimism, a smile on my face, a strange feeling coming over me: happiness. 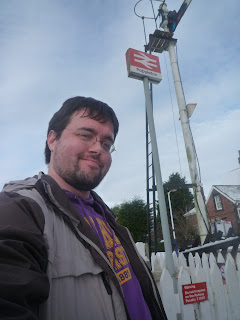 Wye in Kent also has a gated level crossing. They're wonderful things. Enjoy whilst they last.

Yes, you are a wonderful friend...although you do insist in posting awful photos! Loving the blog as always x

come on Scott, invest in some goretex boots, especially with all the walking you must do in all weathers....i will even lend you my go outdoors discount card if you want.....
Dave

But I love my DMs! I should probably buy some proper boots sometime though...