It was birthday last week and not one of you bastards bought me a present.  I mention it every year, in the hope that one of my readers will send me a gift in return for all the free entertainment I provide you with throughout the year.  I know you don't know where I live, but this is the 21st century; you can e-mail me a voucher for Harvey Nicks, or something.  Or alternatively use the internet to cyber stalk me, find out my address, then turn up on my doorstep with something wrapped in tinfoil (NOTE: please don't do that).

One person who has to buy me gifts is, of course, The BF, and I have him very well trained.  An Amazon wish list (not that we actually buy the stuff from Amazon - not until they pay proper amounts of tax) that has been carefully graded in order of preference.  He purchases the presents then lays them out in front of me, much as the Magi once did to Our Lord, seeking my approval.

This year I added a new twist to the Birthday Season - we would go away for the weekend.  The one good thing about being born in January is no-one else wants to go anywhere at this time of year, apart from the Seychelles, so it's quite easy to get a cheap hotel room in this country.  I chose York as our destination, because I'd never been there and I had heard it was a place of beauty and history and well worth a visit.

Which is of course, bollocks.  York is home to the National Railway Museum, and this was the first and last reason I wanted to go there.  The city was pretty enough, in a Chester-sort of way; there were lots of old buildings, some quite awful 20th century ones, a lot of Americans looking confused at boot scrapers.  We went to the Minster, but it was NINE QUID to go inside, so we just turned round and marched back out again, muttering about money lenders in the temple.  Similarly, there was a queue outside the Jorvik Centre, so we didn't bother with that; besides, as a child of the 80s, I felt I knew everything about the Jorvik Centre thanks to the fact that it was seemingly always on Blue Peter.  Mark Curry was permanently in a medieval shift getting pillaged. 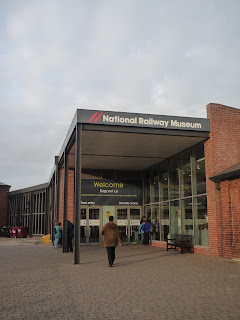 This was all background noise to the main attraction.  We turned up at the NRM just as it opened, and were there for four hours.  The only reason we left was because it all became exhausting after a while.  It's like the British Museum, where there's just so much to see you end up becoming overwhelmed and a little bit light-headed.  However, while the British Museum has nice handy halls full of dull stuff like Medieval pottery or Sumatran coinage that you can skip through on the way to the Phonecians, everything at the NRM is interesting.  Everything.  Even the benches are beautifully designed historic relics. 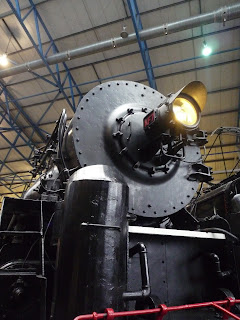 We'd barely got inside and had time to coo over the enormous engines before the tannoy started plugging a talk on the Bullet Train, so we dashed over.  The Bullet Train is the only one outside Japan, a gift from that nation to ours, and an "Explainer" went through its features, history and innovations.  She was very good, despite the BF's misogynistic mutterings ("What does a woman know about trains?  Is she just going to tell us about the seat cushions?"). 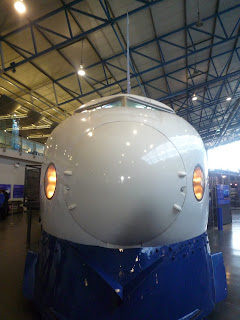 Key facts I took away from the talk: 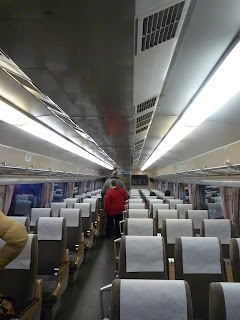 We'd barely finished with Explainer-san when there was a demonstration of the turntable at the centre of the Great Hall.  Two men rotated a mighty steam engine while we watched; it was like the world's heaviest merry go round. 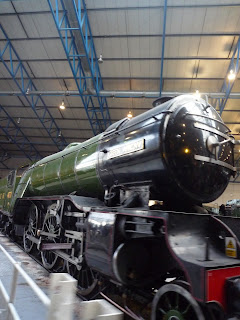 After that we were free to wander around, trying to take it all in.  There was a history of British Rail, which strayed from being unbiased into a full-on obituary; the concluding panels, where everything was broken up and flogged off, were utterly depressing.  Also depressing was a bit of Stalin-esque revisioning when it came to thanking the contributors to the display: 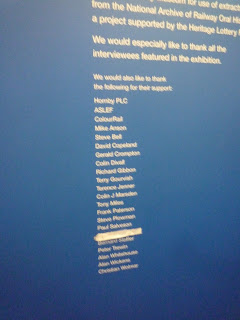 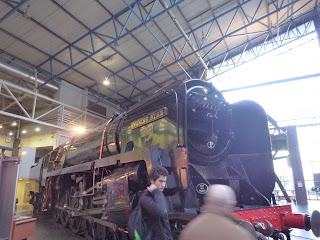 Regular readers will know that I find steam trains a bit dull.  Noisy, old-fashioned, dirty; I'd much rather spend my days on a sleek electric train than a chugging Thomas the Tank Engine.  The exhibits at the NRM are more interesting, because they have a significance behind them - they're not just preserved for the sake of preservation, but instead have a story behind them. 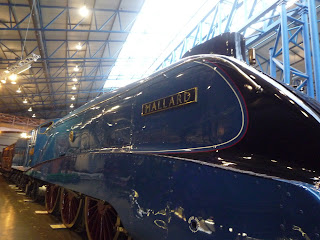 While I was taking that photo, I overheard a woman nearby talking to her friend on her mobile.  "We'll be a bit late, love," she was saying.  "Nick's on the Mallard at the moment."

Nick, it turned out, was a middle-aged man.  He was typical of the museum-goers.  There were lots of kids, yes, but they were more usually accompanied by a Dad rather than a Mum, and there were plenty of men on their own just wandering around.  Occasionally stroking a boiler, which is frankly disturbing.  I wasn't even tempted to do that with the green Southern Railway train, and that was beautiful.  The accompanying information piece on electrification made no mention of Merseyrail when it talked about third-rail systems, though, and so I shall be writing a sternly worded letter immediately after I finish this blog. 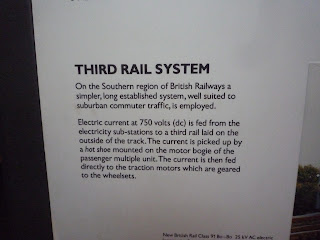 There was even a hint of the future, in the form of a railway manufacturer's mock up of new interiors for the East Coast mainline trains.  Have you ever wanted to have glowing purple cup holders?  You're in luck! 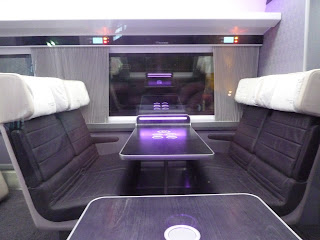 The Warehouse was where they stored the museum's collection, and you were allowed to wander around.  Station signs, maps, models, badges, even railway company toilets, everywhere you looked; frankly the only thing that stopped me from moving in was the lack of a telly. 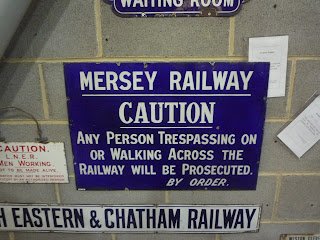 An architect's model of Euston Station's rebuild smelt of naive hope; badges of long gone railway companies were glistening with corporate pride.  There were uniforms, badges, hats, even crockery. 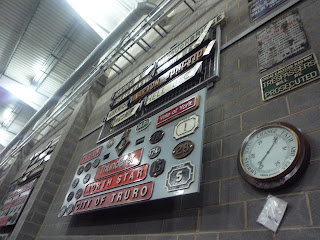 I could have stayed there forever, but I doubt I'd have been able to last very long without sticking something in my pocket, and an arrest for theft is not a good way to finish a day trip. 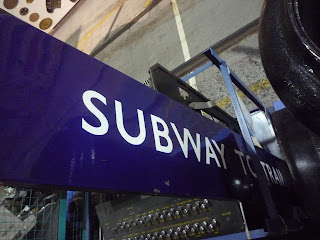 We paused for lunch in the cafe, where a couple of bored five year olds kicked the back of my chair while their Dad tried to sell them on the museum's virtues.  Then it was back under the road to the other hall, filled with Royal trains. 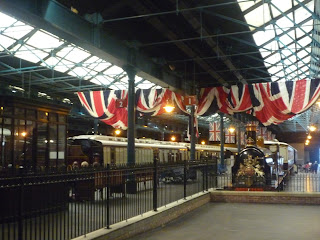 They were very pretty, but Royal trains don't have the same social significance and interest for me that the regular trains do; it's like trying to learn about how people used to live by studying Buckingham Palace.  I was intrigued by the fact that George V had a telephone on board.  I had visions of him bellowing "I'M ON THE TRAIN" to Queen Mary somewhere around Leicester. 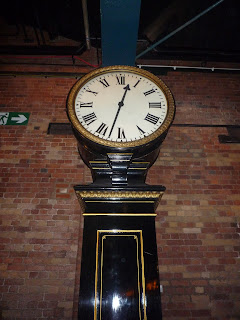 We were tired out by this point so we departed for the gift shop.  It was just as overwhelming; I wanted everything from the entrance onwards, including the Hornby railway and the guard's hats.  In the end I settled  for a fake platform ticket and one of those clicky hand devices inspectors use to count the passengers, much to the BF's horror.  "That's just another device to fuel your OCD," he warned.  "If you start using it to count the number of bites you take out of a sandwich I'll throw it out the window."

So: the National Railway Museum.  It's bloody marvellous.  You can put that on the poster, if you like. 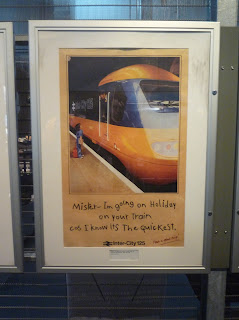 Email ThisBlogThis!Share to TwitterShare to FacebookShare to Pinterest
Labels: museums, The BF, York

Not been there for years