January's so miserable; February's not much better.  It's another New Year and I'm still carrying those extra pounds (/stone) and I'm a year older and I look it.  I needed something to look forward to.

So I booked myself a little trip. 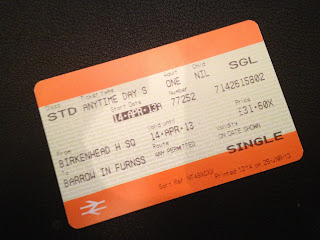 I know it's a few months off, but I'm already pretty excited by the prospect.  I have routes to plan, timetables to consult, spreadsheets to fill in.  And it'll make up for the general lack of activity round here.

Yay! Let me know when you're up and I shall endeavour to be there at the same time. The Cumbrian Coast Line is one of the joys of my life.

The Travelodge in Barrow is nice enough: I even went back there on another occasion. Enjoy!

this might wet your appetite for your forthcoming trip, http://www.video125.co.uk/acatalog/cumbrian_coast.html. they have also filmed on the wirral lines with a release in early March with all branches covered in full HD