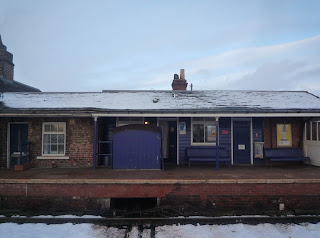 Hammerton station was like Poppleton, only lesser in every way.  There were still level crossing gates, but instead of a cosy signal cabin, there was a dowdy office and a hut painted Northern Rail purple.  There was seating, but no glass enclosure to keep you warm. The station house had been allowed to fall into disrepair. 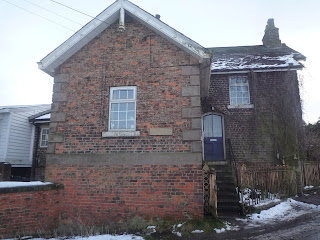 And the tiny station sign was non-existent, leaving me to squat in front of the platform boards like a nutcase.  More of a nutcase. 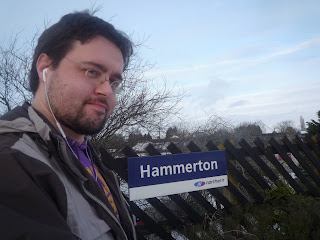 After a terrifying moment where a fellow passenger pushed her pram onto the level crossing just as the train started to move (there was a fevered honk on the train horn) things thinned out.  The gates were restored to let the traffic (/one Nissan) through, the signalman ducked back into his little office and closed the door, and the station fell silent.  I was walking in the opposite direction to everyone else, away from the much larger Green Hammerton.

It was a lot lonelier this way.  I had the Kinks playing in my ears (sadly not The Village Green Preservation Society, which would have been appropriate) but it still seemed like there was a deathly hush around me.  Ray Davies was singing his heart out by I felt deserted somehow.  While Poppleton had felt at peace in the snow, this village seemed to be abandoned. 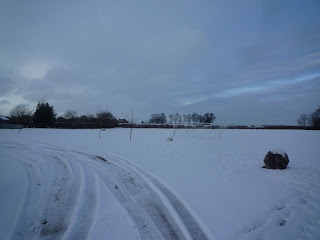 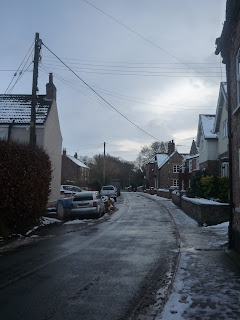 It was obvious that I'd moved up the social scale when I arrived in Kirk Hammerton.  The cars by the side of the road, thick under a coating of snow, were Audi TTs, BMWs, hefty 4x4s with mud splattered up the side.  This was the kind of Yorkshire Jeremy Clarkson came from, the Yorkshire of public schools and hunting and women with a scarf and a fleecy gilet and a steely determination that could sink the Ark Royal.  A different Yorkshire to the cities of Leeds and Sheffield, a place for pony clubs instead of working men's clubs. 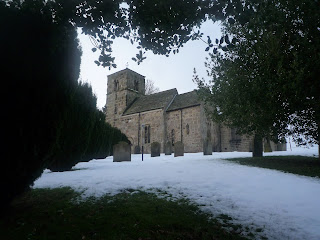 I mean, it was all very pretty, but I just didn't feel comfortable there.  I'd much rather have been in the Lord Nelson in Nether Poppleton, drinking my pint of Thomas Taylor and entering the Sunday night raffle (1st prize: £20 credit behind the bar).  Kirk Hammerton didn't even have a pub.

I passed the Methodist church; there was a postbox on the front for you to post your prayer requests, which struck me as appallingly lazy.  Say your own damn prayers instead of getting someone else to do it for you.  Besides, if He truly is omnipotent, surely you can say the prayer anywhere, at any time?  You could be stuck at a traffic light or on the loo and slip out a quick wish list while you're waiting. 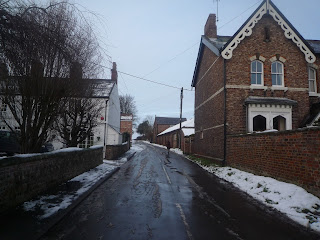 The cottages got smaller as I reached the end of the village; one had a flag pole higher than the roof flying the Union Jack, which made me wonder if it was occupied by the Navy Captain from Mary Poppins.  Then the pavement ran out, and I was left with a bench and a village sign and a lot of snowy embankments. 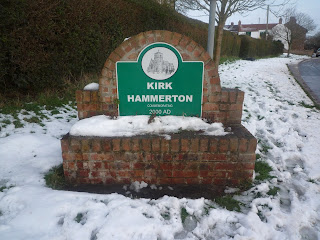 Have you ever tried walking quickly in snow?  Your feet and legs are fighting to gain some kind of purchase on the ground.  Each step is a wrench, pulling at your muscles in a dozen different directions.  I felt my calves strain as I pushed on, hoping that the station was round each corner, and being disappointed every time it wasn't.  I tried walking in the road, but just as I got comfortable, a Beemer would swing round behind me and I'd have to leap onto the verge.  The slow thaw had filled the gutters with a thick slush; every time a car passed I muttered "please don't splash me, please don't splash me". 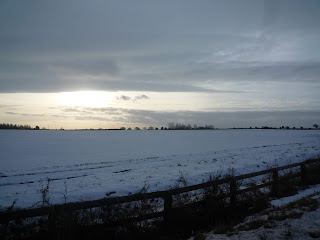 And yet, I looked at all that virgin, untouched snow in the fields alongside me, and I had a mad urge to run around violating it.  Stomp all over it, defile it, make it messy.  Strip naked and roll around in it.  Lie down in it and make snow angels.  I didn't of course, because I am at heart deeply repressed, but the idea bounced around in my head for most of the walk.

I passed under the railway line, then back on myself, nearly getting mown down by a cyclist on the way (my fault, not his).  Cattal station was a tiny industrial hub; the goods yard had been turned into a wrecking yard, and there was a garage and some agriculture.  There was also a pub, the Victoria.  This must be Yorkshire's version of Jamaica Inn, a den of thieves and malcontents, a front for all sorts of nefarious activity, because I can't possibly imagine it gets many drinkers out there. 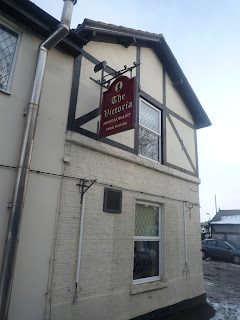 Cattal's little station building housed a tiny waiting room, which was warm and dry, if a bit rough round the edges; the signs inside still had the logo for Regional Railways in the corner.  Northern Rail clearly weren't too bothered about making this part of their empire. 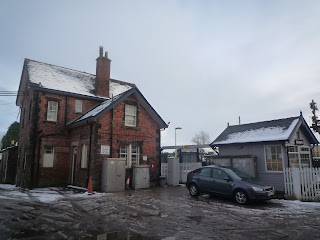 I wandered out onto the platform to wait for the train to arrive.  I couldn't imagine that this scene had changed much for fifty years.  The rusting gates, the semaphore signals, the cold little hut.  A few more electric cables dangling down, perhaps, but the rest could have been cowering under the Beeching cuts. 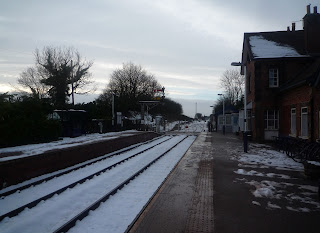 One thing was very definitely not 1960s.  The door to the cabin swung open and a blonde woman walked out to operate the level crossing.  I know it shouldn't have surprised me that there was a woman doing the job, but it did.  Trains are boy's toys; I'd seen it a couple of weeks earlier at the National Railway Museum, with enthusiastic men and less enthusiastic wives.  It still feels odd to see a woman doing a role on the tracks that isn't customer service related.  Sorry. 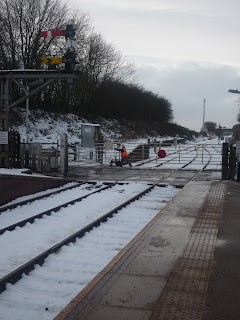 Abandoning my horribly sexist preconceptions, I got back on the train to York.  My legs were tired (they still hurt now), my feet were wet, I looked a complete mess.  But that was another three stations done. 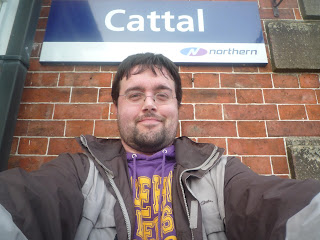 It saddens me to see how Hammerton station house has fallen into decline. I lived in that house in the 1950's and 60's. My father was station master there. Can't something be done to improve it?
Jenny.