The Wolves of Despair

Liverpool would kill for some trams.  There was a whole network planned, three lines, a loop in the city centre.  Streets were designed ready for them to cruise down (ever wondered why Paradise Street is so wide?  Or why there's that odd centre portion to the Liverpool One bus station?).  Then it all collapsed, falling to pieces in a mess of politics and general incompetence.  Some people still hold out hope but sorry, it ain't gonna happen.

I mention all this because, on our recent trip to Birmingham, Ian, Robert and I experienced the Midlands' own tram system.  And it was awful.  Just horrible,  It was profoundly depressing to ride an inadequate, noisy tram when other cities were desperate for this kind of transport infrastructure.

We weren't impressed from the start.  The terminus is at Snow Hill station, and we hunted for a ticket machine.  It turns out you buy the tickets from the on-board conductor, like in On The Buses.  We were shocked and a little bit irritated.  Imagine what it must be like on a busy day, trying to buy a ticket.  Or if you just need to ride a couple of stops and the conductor still hasn't got to you.  Buy before you ride, people.  It's easy to just stick a machine on the platform.  Why aren't you doing it? 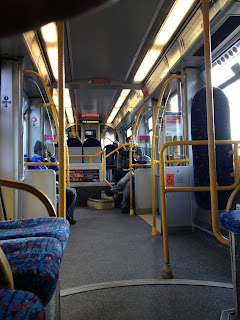 Another surprise was the design of the trams.  Each end has a raised platform, behind the driver's cab; it means there's a little flight of steps for access.  Yes, steps.  It seems bizarre.  I shouldn't be too rude though, because these trams are all about to be replaced with a different design.  Obviously, that's great for the city, but I can't help thinking that's a little bit inefficient.  Manchester's Metrolink is still running the same old trams with the turquoise livery; Metro has felt the need to replace its entire fleet after fifteen years.

We could see why they might need to be replaced as we took off.  The tram was incredibly noisy.  Instead of the gentle swoosh of electric motors that we'd experienced on the Oldham Metrolink line a few months ago, there was clattering, grinding and screaming.  Every turn of the tram was announced with a clunk and a shudder.  It was like being on a Blackpool tram - not one of the new ones, those rickety double deckers with an advert for Cannon & Ball at the Winter Gardens on the side.

The Metro was constructed by converting a former freight line, and the result is it goes through some less than pleasing scenery.  Or as Ian put it, "Are they determined to show us the worst parts of Birmingham en route?"  Slag heaps, rubbish dumps, recycling centres.  Half-empty factories.  Burnt down warehouses.  The stops were typically against a backdrop of industrial grime, nestled in cuttings away from the street.  Suddenly I saw why they might not be keen to have ticket machines full of money on the platforms.  Every shelter, without exception, had been slashed at, abstract scores across the glass to leave vandalised dirty smears behind.

We couldn't really talk along the way.  The constant roar and scream of the wheels drowned everything out - a thousand times worse when we passed under bridges or through tunnels.  On the outskirts of Wolverhampton, the tram rose up to run at street level.  Suddenly we were staring through pub windows and at carpet warehouses.  We were charmed by the red-brick walls of the former Wolverhampton Corporation Transportation Department; less so when we saw the sign announcing it was being converted into a Tesco.  Still, it'll give the citizens a bit of choice from the Sainsburys which is, literally, just across the road. 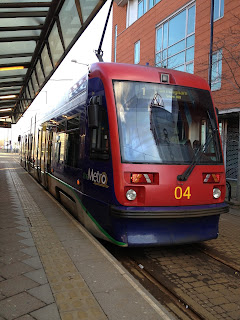 The tram crossed a traffic island on an ostentatious bridge and pulled into the terminus at Wolverhampton St George's.  Note that it's not the bus or train station - those are in a different direction.  The trams finish behind the pedestrian precinct, behind M&S.  We disembarked and were greeted by a drunk in trackie bottoms shouting randomly at passers by.

The Metro is, I have to say, shit.  It is everything bad about modern transportation.  Half-arsed, lazily done, and no real use to anyone.  An extension into Birmingham city centre is only just being built now, when that should have been a pre-requisite; the system is leaking funds because it doesn't go anywhere you'd want to go.  Even that extension's not really enough - a public transport route should ideally be double ended, so you don't end up with a lot of one-way traffic - but the new works are just four stops, terminating at New Street.  Converting a railway line to tram use seems like a great idea, except there are still trains from Wolverhampton to Birmingham, and they only take 15 minutes; why would you bother riding a rickety tram?Manchester closed down those train routes and sent you on the tram instead.  Everything about it is rotten.  I was profoundly disappointed with it all. 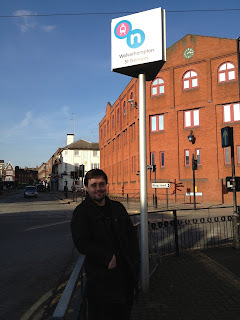 Also, the font they use on their signs is fucking awful.

We headed into Wolverhampton's throbbing centre in search of a coffee.  Perhaps the tram ride had prejudiced us, but it seemed like a horrible place, unpleasantly designed, sparsely populated, filled with shopping centres with weird names ("The Mander Centre"?  To quote Monica Geller, That's not even a word!).  We tipped up in a Costa, having rejected Starbucks on ethical grounds (right on brother!) and swallowed vast amounts of caffeine to perk us up again.

There was a brief moment of pleasantness as we headed towards the station; a proud Victorian civic centre, tucked away round the back, as though the city was embarrassed that they hadn't found a reason to demolish it and replace it with a Morrison's yet.  The very best thing about Wolverhampton is that it's the birthplace of my heroine, Caitlin Moran, and even she got the hell out as soon as she possibly could. 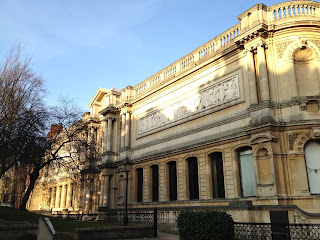 It wasn't enough - we were already fleeing.  Wolverhampton railway station's at the end of a driveway which, like so much of the West Midlands, has been built for cars, not people.  We dodged vehicles trying to get to the entrance, just round the corner from a behemoth of a multi-storey car park.  It was a standard, 1960s, drab box and, of course, they didn't bother putting the station name on it.  Just trust me: this is Wolverhampton station. 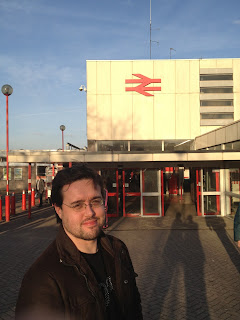 The three of us were a little subdued on the train back.  As committed transport geeks, we want to like trains and trams.  We don't go to these places to mock them, but to celebrate them; I want to be delighted and amused by a new town.  The best parts of the day hadn't involved stations or trains or trams at all; they'd been the chats in between, the laughs, the recoils in bafflement when Robert revealed he had never seen a Carry On film.  All of that could have happened anywhere.  Birmingham and Wolverhampton were entirely surplus to the fun. 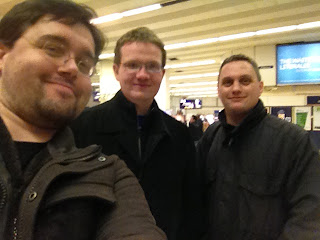 I can't say I'll be rushing back.
Posted by Scott Willison at 12:16

The Metro originally had ticket machines at the stations but they were so shit (like the whole Metro 'experience' really) they ditched them in favour of conductors.

Incidentally the places the Metro serves are also so shit that the locals had developed a habit of either breaking into the machines to nick the cash or just taking the whole ticket machine away with them.. Klassy..

The trams are also utterly, massively shit too (but someone must have had a lovely jolly to Italy in order to be convinced to order them) and a former Manager of Metro described them as having incomprehensible spaghetti for wiring!

Um ... all Manchester's old fleet *is* being replaced, actually, for the same reason as Brum's. They're shit (they are actually an older version, T68, of Brum's T69s).

You want to criticise a tram line? Come and ride on the Manchester - Droylsden line, and see if you can work out what the fuck it's for.

The Manchester fleet is being replaced, yes, but it lasted a damn sight longer than the Birmingham ones, and the new trams were introduced alongside the old ones in phases. Midland Metro basically threw their hands in the air and said "they're shit!". And having ridden both, I much prefer Manchester's. I haven't ridden the Droylsden line yet, but since it passes through Sportcity and some pretty underprivileged areas, and it still has the Ashton extension to come.

The ticket machine thing really doesn't surprise me. I wouldn't fancy loitering at some of those tram stops after dark.

To be fair, what did you expect from a trip through Winson Green, Hansdworth, West Brom, Bilston and Wolves? This isn't swanky Liverpool you know.

The Mander Centre is named for the Manders, a hugely influential Wolverhampton family whose fortune was made in paint and who became Liberal MPs for the town as well as establishing one of the finest Arts and Crafts Houses and collections in the country. There!