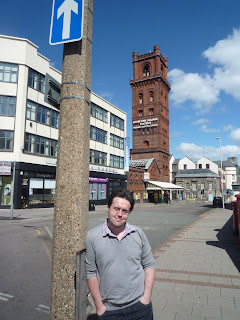 It seems appropriate that my final journey started underground.  As you might remember from my forthcoming children's series, Hamilton Square is always feeling sad that it doesn't get to hang out with the cool kids; it's nice that I got to include it on this auspicious occasion.

Yep, this is the story of how I finished off the Merseyrail map.  Accompanying me, for the first time in ages, was the Bf.  He wanted to be there for this important moment, even though he never even reads the blog (he's not a big reader).  Hopefully - hopefully - there would be people at James Street to join in too.

Obviously I was terrified no-one else would turn up.  The Bf tried to console me, saying that at least he would be there, and wasn't he the most important person anyway?  Which shows that you can be with someone for fifteen years and they can still not know you at all.  I can see him any day of the week.

I wasn't disappointed.  Yep, there were people ready to join me on the trip.  Six people, which is actually a nice amount to have - it's enough that you can chat to everyone, not too many, and enough to momentarily boost your ego.  Who were these fellow travellers? 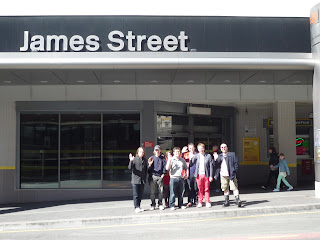 From left: Gareth, Darrell, Lorna (doing her best to hide), Jamie, Robert and another Jamie.  Introductions were done, photo taken, station collected, and so it was into the lift and off to catch a train.  (Incidentally, the Bf was behind the camera, and therefore is in none of these shots; part of my plan to keep him as the Maris Crane of this blog).

Here's what happened.  I was so busy being relieved that people showed up at all, and trying to keep things light and amusing, that I completely forgot where I was going.  I just instinctively wandered out of the lift and straight to the Wirral bound platform, as though I was going home.  Even more weirdly, everyone followed me.   It was only once we were stood on the platform itself that it was gently pointed out to me that we were going the wrong bloody way.  Not the best of starts. 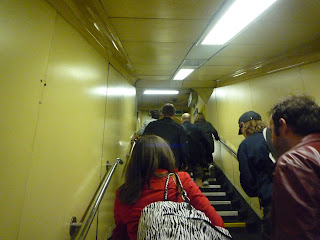 We scurried back up the stairs, ignoring Robert's constant complaints about having a sore knee, and made our way through the labyrinth of corridors to the Loop platform.  Unsurprisingly we were the only people there.  I don't know why more people don't use it to get back to the Wirral - it only adds an extra five minutes or so to your journey, but it means you're much more likely to get a seat home than if you board after the train's been everywhere else in the city centre.

A quick scoot under the city streets and we were out at Moorfields.  This was, of course, the station in the very first Merseytart trip, so coming back gave the whole project a circular feel - a loop, if you will (do you see what I did there?).  We ignored the homeless man crouched at the foot of the escalators, hacking into his glove, and collected the station sign. 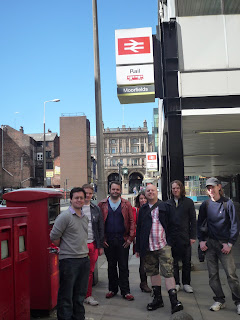 It was time to walk to the next station, Lime Street (lower level).  The main line station was collected during that embarrassing time when I was in the Liverpool Echo, in the only example of professional photography on this website; the underground station remained uncollected.  Ignoring Robert's continued whines about his sore knee, we marched across town via the Queen Square bus terminal.  It really was a beautiful day, one of those great Spring moments where there's enough sun for it to be pleasant and not sweaty.  The city centre was throbbing, probably still on a high after the National, and we mixed and merged with happy, laughing Scousers.  Damn, but I love this city.

I'd decided that we'd get our photos outside the St George's Hall entrance to the station, so we'd be in the shadow of one of the finest Liverpool icons.  There were two pensioners already waiting there, though what for, I have no idea; I like to imagine they were Merseytart groupies, just here to catch a glimpse of their idol, and possibly touch the hem of my garment.  Or maybe they were just waiting for a lift home. 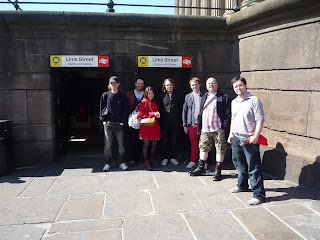 And so, to the final section of the Loop, and Liverpool Central.  I didn't quite know what to feel as we stepped off the train.  The weird thing is, it was so familiar, it didn't feel special; I was here only last Thursday, with my friend Jennie, so it wasn't like I was stepping into a new world.  It was the same old,  knackered round the edges Central.  But as we rose up the escalators, it started to dawn on me.  That was it.  That was all of it over and done with. 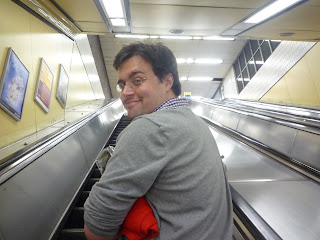 There was no fanfare, no fireworks, no dancing girls to greet us.  It was just another day at the busy station.  There were crash barriers piled up against one wall, not to hold back the screaming fans, but a relic of the Aintree traffic.  We whisked through the gates and gathered in the shopping centre for the final picture.  (I decided that as that was the entrance to the station proper, that should be the location of the shot). 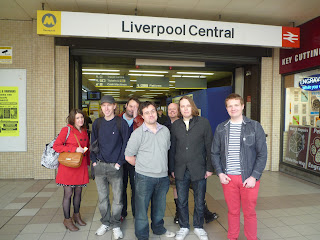 Nice to see that Jamie was overcome with emotion right there at the end.  Not that Jamie, the other one.

How do you close off such an experience?  How else: with alcohol (except for Darrell, who was still recovering from an extensive drinking session the night before and was sticking to water).  We headed up Bold Street to Bier, the great little alehouse tucked into Newington, and ordered pints of imaginatively titled beers.  The conversation swept round a variety of weird topics (Gus Honeybun!  Upgrading Doctor Who to Blu-Ray!  Fag haggery!  Hooch vs Two Dogs!) but it was friendly, convivial, fun.

As I sat there I realised: five years ago, I didn't know any of these people.  Well, obviously I knew the Bf, and I used to work with Lorna years back, but we'd lost touch.  Everyone else I knew just because of this blog.  We'd become friends - yes, friends - just because I'd looked at a Merseyrail map and thought "I'd like to go to all of those stations one day."  The Internet is a wonderful thing.  People are pretty wonderful too. 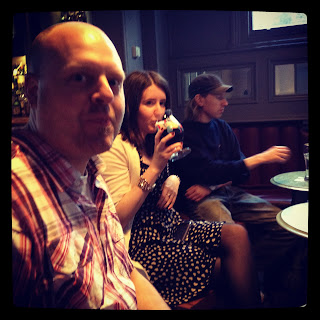 (Yes, I've just got an iPhone, so yes, I have Instagram, so yes, I had to take a couple of pretentious looking pics.)

I slipped to the loo and changed into the t-shirt Jamie had brought me (not that one, the other Jamie).  Emblazoned with the 1970s Merseyrail picture, it also had the dates of the whole blog on it: 17 June 2007 through to 15 April 2012.  It was a bit like wearing your own obituary.  He gave me some Merseyrail flip-flops as well.  I didn't put those on, because the toilet floor was suffering from a flood. 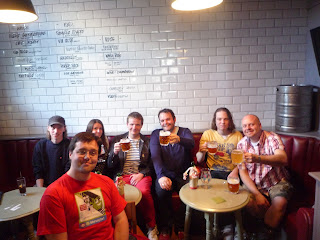 I'm not going anywhere yet; there are a few more closing posts to come, and I've got a trip planned for a couple of weeks time.  But this is undeniably the end of an era.

And thank you again.
Posted by Scott Willison at 19:16

No, Scott: thank YOU.

Thank you for a consistently entertaining, intriguing and rewarding read, and for embarking on - and completing - such an inspired quest.

Just wanted to echo what everyone else has said really. Thankyou for a great blog, had many a sleepless night reading through the older entries. Now in the hope that it doesn't end here, here's a proverbial carrot on a stick :P http://www.nationalrail.co.uk/passenger_services/maps/nationalrailnetworkmapZoom.pdf

Please don't let it end here. Please. If only as I'll have nothing else to read and give me a chuckle during working hours!

thanks for the read. Still haven't read every single entry, especially the early ones, so in a way, it's not really over for me. Will be doing it leisurely.

Stay in touch and all the best.

Scott, I'm so sorry I could not come along, really, I thought it was this coming Sunday?, I would have loved to have been there, bit pissed of being honest (with myself really) :-(, anyway, do another one, just for the heck of it, I love your blog, it's been great, glad your carrying on, brilliant. And

Do an other meet up, be cool to have a beer, and (really honest), naffed off I missed it, cheers :-))

It doesn't matter when it is. If there's beer, I'm there.

really sorry I missed it Scott, bit naffed off, as got the dates mixed up, but glad your carrying on with the blog, as you are a great writer (I have read Stuart Maconie's travel book 'Pies and Prejudice' about 3 times), and your writing reminds me of that, really excellent, and a job well done, next time the is a get together I'll be there (and I forgive you for not being massive impressed with my fav city-Madrid!!!), seriously, this is great stuff, glad your keeping it going, it's brill :-)

I realise that I am c. 3.5 years out of date, but having found the blog in 2013 and only gone back to the start of the Northern Rail days, I decided to complete the backstory and have been working my way through your original quest over the last few months. So, rather out-of-datedly, well done on this one - I bet 56 stations seemed like a lot at the time ;)