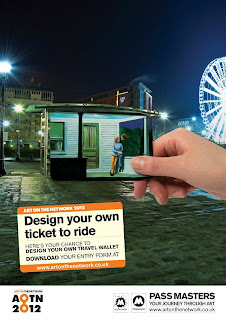 Art on the Network is back!  Yay!

To me, this is one of the Capital of Culture's finest legacies - an annual art prize, sponsored by Merseytravel, and now in its fourth year.  This year's theme - clearly preparing for the introduction of the Walrus card - is to design a "travel wallet".  There are two categories: one for adults and one for schoolchildren.

(I'm going to be a curmudgeon here and say that I hate it when there are child-designed posters and artwork around - those "stay off the track" posters on Merseyrail trains, for example.  The only people who actually like seeing a badly scrawled felt tipped illustration on the wall are the kid who designed it and their immediate family.  To me it's just a mess of badly illustrated primary colours.  I'd rather stare at a No Win, No Fee solicitor ad).

It's a £500 prize (though the money goes to the kiddie's school, not the child, so don't go counting on armfuls of Haribo).  More importantly, your design will actually be put up for sale across Merseyside.  You can enter at http://www.artonthenetwork.co.uk.  If you win, my referral fee is 10%.  Cash only.

Hopefully, the competition will be more successful than last year.  I'm not criticising the winning artworks - one of which can be seen above, and more below; the winning entries were all excellent.  I was disappointed in the way the competition ran.

Though I covered the opening of the competition in April last year, the winners weren't announced until January, and then in a very low-key way.  The prize seemed to have been downgraded as well.  The competition was themed around posters, so you'd have expected to be seeing these fine pieces of art all over the city by now.

No.  The designs merely appeared on the front of "limited edition Merseytravel publications" - posh bus timetables, in other words.  A much more transient and ignominious fate for all that hard work.  It means that the advertisements for entries to the competition received more prominence than the actual winners - that can't be right, can it?

(You'll be unsurprised to learn the piece above was my favourite).

These posters deserved to be all over the Liverpool area - in stations, bus shelters, ferry terminals.  They're worth selling in the MtoGo stores, and the museums.  They're far more deserving of a spot on the shelves than Beatles frightwigs.  I hope this year's winners' designs fare a lot better.
Posted by Scott Willison at 10:23