Don't Cry For Me, Merseytarters

Anyone who knows me is aware of my fondness for the film of Evita.  I saw it with my housemates when I was 20 and we developed a slight obsession.  While our contemporaries were sucking on bongs to Portishead, we were bouncing around the kitchen singing along to "Buenos Aries".  Of course, the presence of Antonio Banderas in his prime didn't harm things either.

(I am going somewhere with this).

Now and then little passages from the film will stick in my head and become mantras.  I was often struck by the phrase "forgive my intrusion, but fine as those sentiments sound/Little has changed for us peasants down here on the ground" whenever my boss would wheel out a new scheme or innovation that was like shuffling deckchairs on the Titanic.  And so it has been for the past week, as people have asked me, "so what happens now?"  The quote above - performed in the film by Andrea Corr, of The Beautiful Corrs - has been rattling round in my head like the last marble in the bag. 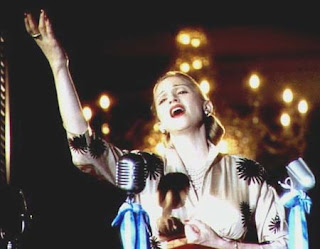 So what happens now?

Firstly, I'm not going anywhere.  I love writing this blog, so it's going to continue.  It's just that it's going to have to change.  From now on, when I talk about Merseyrail, it'll be about those things that are changing, little snippets of news, projects.  Like Art on the Network, or the station refurbishments, or - fingers crossed - new lines and stations and trains.

Beyond that, I'm going to carry on exploring Merseyside's railway history, and its abandoned lines and stations, as I have done with the Birkenhead Dock and Overhead Railway lines in the last few months.  There's a whole cobweb of old railways all over the city, sometimes hidden, sometimes not, and I'd love to keep looking them over.  It'll give me a chance to explore places that are no longer on Liverpool's railway map - places like West Derby and Knotty Ash - as well as places that might be on it one day (Maghull North and Town Meadow, perhaps?).

There will still be me fannying around in front of railway station signs as well.  I've got a trip planned for the week after next, similar to my Welsh Odyssey last year, which will mean four whole days of walking, riding, and up the nose shots of me and a British Rail logo.  There are some other local stations I'd like to check out, and some just plain oddities I'd love to explore - the Manchester Metrolink, for example.  I might even go back to the Merseyrail stations again just to see if they've changed (though that would probably only be in a slow week).

In the longer term, I do have a vague idea for another map-based project, but it's very much a thought at the moment, rather than an actual plan.  It might be just too ambitious.

What I'm saying is, unlike Peron's teenage mistress being kicked out of bed by Madonna in a pencil skirt, don't go anywhere.  I'm not.  Well, apart from the fact that I am going to places, but when I've been there, I'll come back here.  If you see what I mean.
Posted by Scott Willison at 08:58

Email ThisBlogThis!Share to TwitterShare to FacebookShare to Pinterest
Labels: odds and sods, The Long Goodbye, to do list

But surely no map-based project is *too* ambitious... merely an extremely lengthy challenge.

Hooray the blog is carrying on! If I had the choice (and I realise that I do not) I'd be interested in your take on the railways of the Isle of Man.

An ambitious project might be a Merseyside version of Rails Around Birmingham. You've done a lot of the work already.

I did actually think about the Isle of Man, but it's got such a rubbish service, I couldn't be bothered. It would take forever.