Today's Echo has the details of closure for next year's station upgrades.  The good news is, the stations are being upgraded at all.  The bad news is that the promised station closures aren't going to be restricted to Liverpool Central, as had previously been indicated.  That £40 million is going to be spread right round the Loop, and so is the misery.

I've done a few little diagrams to show how the situation's going to develop over the next few months. 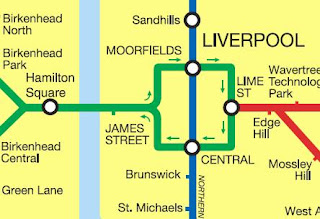 This is the situation right now: a lovely SQUARE loop, interchange stations, trains everywhere.  From the 23rd April next year, it'll change to this: 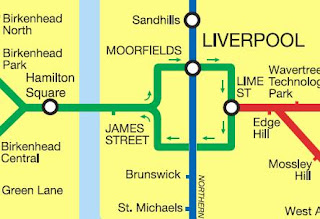 Liverpool Central will effectively be wiped off the map.  Both the Northern and Wirral line platforms will be closed for refurbishment.  Replacement bus services will run instead, but to be frank, you'd be better off walking.  When the Loop was closed, back when I was commuting from Birkenhead Park to Crewe, I found it quicker to just walk across town than to wait for the James Street-Lime Street bus.  Northern Line passengers can go onto Moorfields and change to the Wirral Line, if they really need to, to end up round by Central. 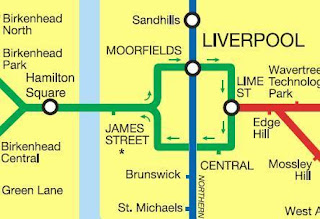 The Wirral Line platforms at Central will then reopen from the 24th August, but what's that at James Street?  I'm afraid that asterisk means that platform 1 at James Street will be closed from the 2nd August onwards.  Fortunately, that's not too stressful.  It'll still be possible to alight at Moorfields or, if you're really lazy, you can stay on the train all the way round the Loop and get off at platform 3, before the train heads back under the Mersey.  Of course, if you do that, I'll judge you a little bit. 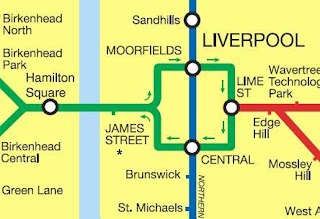 Liverpool Central will then be fully reopened on October 21st, all being well, but the works on platform 1 at James Street will continue until January 6th, 2013.  Work then immediately shifts to platform 3, so people getting on a Wirral-bound train at Central won't have much chance of getting a seat.

The James Street work is due to continue until April 23rd 2013, but on April 21st Lime Street will close for business, until August 21st.  The map will probably show that it's perfectly possible to walk from Lime Street to Central, but I couldn't work out a way to do that without re-jigging the map in a major fashion.  It'll probably be similar to when the Grand National is on and signs appear in the streets to guide tourists to Central for the Aintree trains. 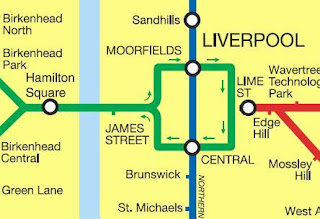 Sixteen months later, and three of the city's underground stations will have been refurbished.  Moorfields and Hamilton Square will also be getting done, but the timescales haven't been specified: it's somewhere "between 2014 and 2019".

What's interesting about this to me is that they're going to close any of the other stations at all.  I understood that Central would need a lot of work, but I didn't realise that the other stations would be getting this level of attention.  I'm actually a bit more excited now, thinking about the level of work that can be achieved in those kind of shutdowns.  Put it a different way: I am REALLY hoping that the brown plastic seats will be gone when I turn up at the new look stations.

Incidentally, my earlier post about Central has thrown up a couple of issues of its own.  As Marke pointed out, the time for expanding the station is rapidly shrinking, while a shopping centre is built over the top; any reconstruction gets 1000x times more expensive the minute you can't dig down from the surface.  The Echo article also alleges that platform-edge doors (PEDs) will be implemented at Central to contain the crowds.  I'm taking that with a pinch of salt.  When the Jubilee Line extension was built PEDs were put on all the new stations, but not on the old ones, because of difficulties with signalling equipment and the software involved.  Even now, the likes of Green Park are open at platform level.  I think this is one of those cases where things are talked about but will never actually happen.

"Anonymous" (why so shy?  We're all friends here) also said that my Kirkby-Hunts Cross plans will never happen because of the flat crossing of the Liverpool-Manchester line.  Running two such intensive services against one another would cause all sorts of hassle.  This doesn't surprise me, as I basically came up with my plan by pointing at the map and working out what I'd like to happen, rather than being practical, but I have since read rumours that Network Rail has a similar idea.  They're considering putting in a turnback facility somewhere beyond Liverpool South Parkway, so trains can reverse without hitting the junction in the first place.  Good for the Northern Line; bad for Hunts Cross, it seems.

I'm less keen on "Anonymous"'s suggestion that staff are employed to force people along the platforms.  We're British; we don't respond well to that kind of forcible behaviour.  That's all a bit Japanese, and we know where that will end, with disgustingly efficient bullet trains.  Members of staff should be kept behind glass screens where they belong, not manhandling the public.  Unless it's that fit bloke who used to work at Birkenhead Park, in which case he can manhan[remainder of this paragraph cut for reasons of taste].
Posted by Scott Willison at 23:01

I've got to say, I do not want to be a Northern Line user whilst Central is closed. Moorfields already has some capacity problems in peak, although nowhere near Central and I think Moorfields will be a terrible place during the rush hour. Central's stressful enough as it is. Moorfield's rush hour traffic with Central's on top? - the stuff nightmares are made of, I fear.

Central is over-relied upon. I think a lot of it is legacy of the last few decades when our downtown was seen as essentially just Church Street to too many people. Add to this that more trains terminate here than run through. As a user of the Northern Line south of Central, I feel its frequency is really not good enough. A minimum of 6tph in the day is needed, I reckon and the proposed 8tph would be absolutely dandy. I think a lot more people would choose Merseyrail over the 82 bus if this came about. The turnaround facility at South Parkway makes a lot of sense. Personally, I'd have Southport trains terminate at Central, Ormskirk trains terminate at South Parkway and Kirkby trains terminate at Hunts Cross. It's not bad news for Hunts Cross because Hunts Cross won't be losing anything. Its 4tph Northern Line service plus an additional 1tph 'City Line' service makes it positively spoilt compared to neighbouring Halewood's 1tph, a Pacer and all. To be honest, Hunts Cross makes no real sense as a terminus, especially considering that it takes up capacity with its inefficient cross over. I'd rather either peg the Northern Line back to South Parkway, or extent the Northern Line to Warrington Central, moving the fast services to Chat Moss, ending the curve onto the WCML spur and having a new stopper service to Runcorn, serving West Allerton & Mossley Hill with a couple of new stations in Wavertree & the Penny Lane area.

Another thing that could've helped here would've been another station to the south of Central, perhaps under Great George Street. This would've taken at least a little off Central's load but also could have helped a few commuters out during Central's closure, as it would've been more handy to many than Moorfields and eased some of the awful crowding that will take place there next year. A turnback facility here could've replaced Central's too, providing terminating Northern Line service passengers with more downtown station options and with a chance to use this station to change for Hunts Cross and not Central.

Another idea is the 'mop-up' idea. That is, make the trains more frequent to 'mop-up' the passengers. Ideally, certainly when the new stock comes in, I'd like a uniform number of cars. At least then you can mark with certainty where the trains will stop and people won't feel like a wally when a 3-car train turns up and stops at the other end of the platform. Instead of 4x6-cars an hour, I'd go for 6x4, so the service is increased but the capacity remains. In off-peak, it could be 4x4tph instead of 4x3tph. The service frequency would be increased, so there's less people waiting on the plaforms. Of course, more drivers & guards (if the latter are still around) would need to be employed, but it may well be worth the investment.

I hope they expand the box before Central Village as well. As far as I know, nothing has been said to confirm or deny that this is happening.

The Platform Edge Gates are a surprise. I say 'gates' because they Echo article suggests that they'll be the half-height Parisian-style ones. I'm a fan and Platform Edge Doors have been mentioned as a possibilty in various documents for all Mereyrail underground stations in the past. However, I would have assumed we would not see such things until the trains were replaced. Installing PEDs or PEGs or whatever will surely dictate that whatever new trains we get, the new ones will have to have exact same door spacing as the old ones. Either that or replace the PEDs/PEGs with again newer ones.

Sorry for the long ramble. You did kind of ask about ideas and it appears I have tons of them, when it comes to the Northern Line.

Hate to be picky but wouldn't it have been better if you'd have put a little stub for James Street after the Wirral Line splits (ie just before Moorfields and just after Central) rather than using a *?! :D

Thank you for pointing that out gottago. NOW NEVER DARKEN THIS BLOG AGAIN.

Some good ideas there Gareth. Of course once the new trains are brought in, the concept of a "terminus" may be moot; if the rumoured dual voltage trains come in then Northern Line trains could theoretically go all the way to Manchester Victoria. I'd personally like to see it go at least to Hough Green, to get to the edge of the Merseytravel boundary.

I'm totally with you on a Chinatown station. Again, frustratingly, there's a big bit of undeveloped land right behind the Blackie which would be perfect. As anyone who's eaten in the Italian Club at the top of Bold Street will attest, the line is very close to the surface here, so it wouldn't have to be a very deep excavation to build a new station, and then you could construct flats over the top. It'd help to open up the Baltic Triangle area and round by the CUC, handy for Chinatown and Renshaw Street, it'd be convenient for the Anglican Cathedral and LIPA, and it's not burdened with the psychological barrier of being on the "wrong" side of Parliament Street like St James is. Plus, and this is real pie in the sky time, that bit of land is right over the top of the Wapping Tunnel... you know, if someone ever decides to use it.

Parisian-style gates would seem to be a good idea, but again we have software issues, and I'm not sure if Health & Safety in the UK would be keen on their half-height...

They have put up a new plastered wall in Central on the right just as you enter the station. Rumour has it that it is going to be used to display pictures of how wonderful it will be when it is finished.