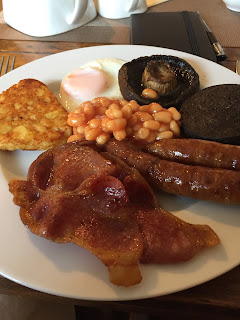 It's not that the bed and breakfast was bad, because it wasn't.  It was a perfectly reasonable little place.  It just wasn't me.

I'm not one for tiny, intimate places where you're treated like one of the family.  I don't like being noticed, or observed.  It's why I'll favour a Travelodge or a bland Radisson over a dinky little place by the sea.  I want to be able to come and go without people noticing, to sneak a bag of snacks to my room without worrying the owners will judge my food choices, to be able to watch TV without fretting that it's too loud and everyone else will know I was laughing at Rude Tube.  The kind of place where the only contact you have with the staff is when you approach them at reception, and where no-one pops out of a side room to ask how your day has been.

Unfortunately, there isn't much choice for accommodation in Ravenglass,  It's a tiny village, barely more than a single street, located at the confluence of the Esk, Irt and Mite rivers.  It's adorable, of course. 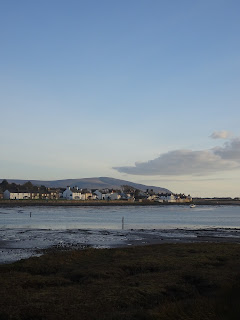 But then, I thought it was adorable the last time I visited, back in 2013.  Why had I returned three years later, and furthermore, to stay?  One word: Dalegarth.

The last time I had visited Ravenglass it had been as part of a committed effort to visit every station on the Cumbrian Coast.  Over the course of a week I worked my way up the line, hopping off and on, enjoying tiny halts that clung to the edge of the Irish Sea.  It was lovely.  I really enjoyed it.  But I was happy to head home and never return.

Barely a month later, Northern Rail released a new, revised version of the map.  And they added a station.  Dalegarth. 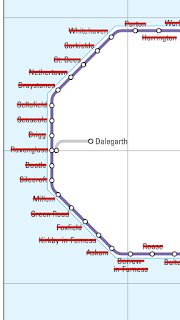 Northern hadn't suddenly built a new extension.  Dalegarth is the terminus of the Ravenglass & Eskdale Railway, a small heritage line that runs from Ravenglass station, and for some reason, it was now on the map.  I still don't know why it's there, to be honest.  It was added along with Pickering, on the North Yorkshire Moors Railway, but all the many other heritage lines across the North were ignored.

So I was basically being forced to shlep all the way back up to Cumbria - a journey that, if you're very lucky, takes about five hours - to collect a single station on a railway line with a very limited timetable, then go home.  Nope, I thought, and for three years I refused to go anywhere near it.

Finally I gave in, but I decided to get my money's worth.  Instead of just collecting Dalegarth, I'd collect all the Ravenglass and Eskdale's stations.  There are nine of them in total. 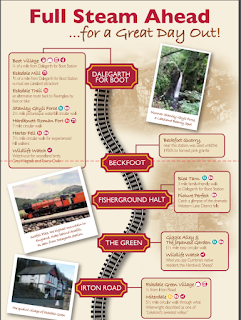 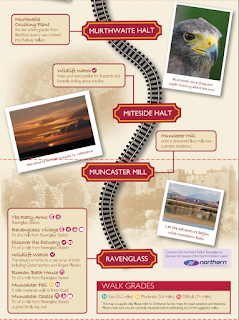 The timetable was limited, it being a February weekend, so I had to spread the trip out over two days to be sure I could visit every station.  None the less, I had a plan.

That was why I was sat in my B&B's breakfast room, trying to quietly chomp on a chipolata while Radio 2 played Sounds of the Sixties.  It was the start of an Epic Journey With Even Less Purpose Than Usual, another grab of stations I didn't need to visit.  It was another of those trips where I was just visiting them all because they were there.
Posted by Scott Willison at 08:40

For someone who professes not to 'get' heritage railways, taking the trouble to do all the stations on a miniature steam line sounds dangerously like you're cracking.

That said, it's a lovely area for walking. Parky at this time of year, though.