Run To The Top 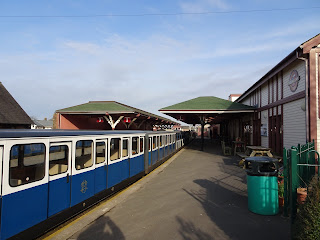 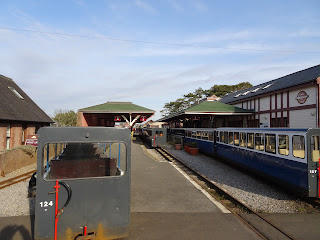 This wasn't just narrow gauge; it was miniscule gauge, a line for the tiniest of little people.  I wedged myself into one of the carriages, picking an enclosed one for my first trip.  Later I would realise that, even on a frosty February morning, the open carriages are the place to be.  I slid into the compact interior, lined with stripped pine like my mum's kitchen in the 1970s, my knees raised, my head barely skimming the roof.  I'm not a tall man but if I'd sat up straight my skull would have tapped the ceiling. 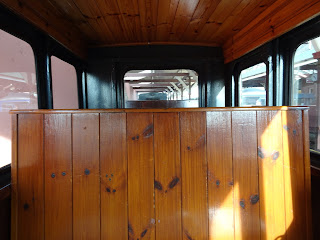 The only other people in the carriage were a couple of elderly ladies, apparently staff at the cafe in Dalegarth, getting a ride up for the day's work.  They were chatting about holidays; the older one said she liked Warner Hotels "because they don't allow kiddies".  A braying quartet of hikers debated loudly about where to sit, over excited and jolly, finally picking an open carriage to much hilarity.

All around me, grey-haired men checked clipboards as they attended to station duties.  The diesel engine clicked, sighed, then grumbled; a guard's whistle, and the train shuddered its way out of the platform.

Behind the station was a hinterland of workshops and engines, one decorated with a Happy 50th! banner for a lucky birthday boy later that day (of course it will be for a boy).  The Ravenglass and Eskdale - or La'al Ratty, as it's known to the locals - wasn't built as a tourist attraction; for decades it served a purpose, bringing iron ore and then granite down from the mountains to the proper railway line.  Its industrial uses ended, and in 1960 it became a preserved railway.

In its lower stretches, the line shadows the River Mite, and I looked down at it from the carriage, fast flowing.  The wheels kicked out a repetitive pattern, one-two-THREE, one-two-THREE, picking up speed on the flat land by the river.  Across fields of sheep the mountains curled into view, the highest ones white with snow, backdropped by the bluest of skies.  Skies like that don't seem to exist anywhere else.

A turn into a forest slowed the engine, as an S bend held back our speed.  I spotted frosted leaves on the ground; despite the winter sun, it had been incredibly cold that morning.  A gradient sign rolled past - 1 in 51 - and I tried to remember back to GCSE Geography; was that high or low?  Imperial still rules La'al Ratty, as you'd expect on a railway frozen in time; none of this percentage nonsense here.  It's an interesting contrast with the occasional legally required sign, heritage trappings giving way to the stark 1960s frankness of Railway Alphabet.

The women behind me, who hadn't stopped for breath since Ravenglass, had progressed to the new woman in the bakery.  "I used to know her," said the older one, managing to convey that there's a very good reason she's using the past tense.  Her companion reassured her that while the new girl will be doing the cakes, Cathy will be taking on the sausage rolls.

The landscape became starker, emptier, bracken and brush scattered across hardy hill grasses.  Grey fleeced sheep tucked between trees, then the white of a village; more a run of houses, really, Land Rovers in the driveway ready for action.  Irton Road station passed by, and I realised I had missed the three previous halts.  They were so small I hadn't even noticed them.  The chugging diesel frightened a cow from her trackside grazing; she turned and fled, bashing into another cow in her panic.

At The Green, the engine came to a clanging halt, and the hikers disembarked. Still laughing, still jolly.  The guard (sat in one of the open cars) pulled his hat down over his chilly ears as the engine picked up speed again, only to suddenly brake down to walking speed.  A sheep had somehow got through the fence and onto the line; now it was panicked, looking for somewhere to run, and realising it was trapped on a very long very thin track.  The train shadowed the sheep as she looked for an escape, finally finding an embankment to climb away from us.  As we passed she seemed to give us a dirty look.

The train resumed its former speed, swinging through a narrow cutting of sharp rock, while the younger of my travelling companions talked about her husband's upcoming retirement ("God knows what I'm going to do with him.").  The driver tooted his horn as we pass through Beckfoot, no doubt thrilling the residents of the neighbouring B&B trying to get a Saturday lie in, and then the track curved round for the terminus. 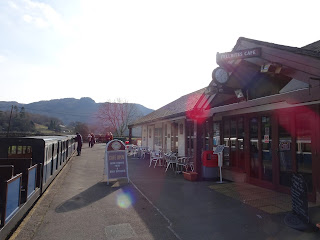 I unfurled onto the platform, unfolding legs and arms to try and emerge from the tiny carriage with a semblance of dignity.  Other passengers stretched and yawned, idly debating whether to have breakfast in the cafe.  I dashed off.  I had a day of walking ahead, and there was one sight I really wanted to see before I got the train back. 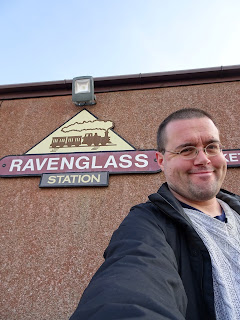 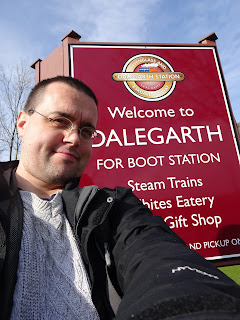 It was 3 foot gauge when it was a serious railway (before WW1).

The first paragraph sounds like a bad grindr meet!