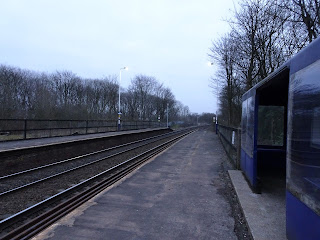 Manchester's railway stations are a curiosity.  There are 93 of them within Transport for Greater Manchester's boundaries, but there's no consistency or rationale behind their services.  If you get on a train at Moorfields in Liverpool, you know that it'll stop at every station on the way; not so in Manchester.  There are skipped stations, semi-fasts, fasts, and, in the case of Clifton, stations that barely get any trains at all.

Clifton gets two trains.  Not two trains an hour; two a day.  And at completely opposite times of day, too.  There's one heading into the city centre at 07:06 in the morning.  Then there's one heading out of town at 18:22.  That's the lot.  I can't seem to find the reason for such a terrible service; it seems to boil down to the railway companies just not being that bothered.  Last year 152 people used the station, in that classic chicken-egg question of "are there hardly any passengers because there are no trains, or are there no trains because there are hardly any passengers?"  I was pleased to have bumped up the numbers by one - I'd deliberately bought a single to Clifton just to make sure it was registered. 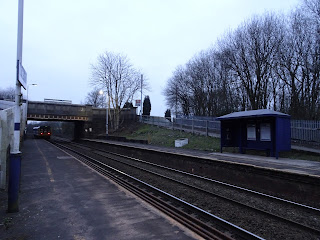 I'm pretty sure the man who got off the train with me regards it as his own private empire; he certainly gave me some searching looks as he passed me.  Of course, at the time, I was doing this: 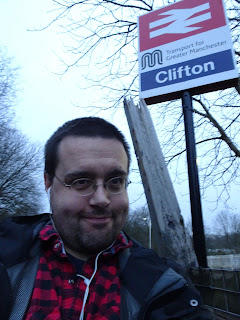 That's the other odd part about TfGM and their railway stations.  Right there is a brand new, shiny sign with the current logo on it.  I've been all over the city and most of them are still bumbling along with old signs - some with the old name for the local transport authority, GMPTE, and its red and white logo; some with the logo before that, in orange and white; even a couple with the short lived Network Northwest branding from the late Eighties.  Clifton though, silly, barely used, Clifton?  Send some men out there to give it a brand new look.  That's a great use of our money.

I turned towards the city at a fast pace.  I had to rush.  It might technically be spring, there may be daffodils bursting out and lighter evenings, but the sun is still setting before seven o'clock.  As I'd ridden the train out of Victoria I'd seen Manchester's skyscrapers outlined with the golden gleam of a dying evening.  If I was going to get to Swinton station, and get a photo outside without using the flash and washing my face out completely, I was going to need to motor.

I headed up a hill lined with big between the war houses, run down and messy.  Closer to the city, these would be worth a fortune, but the other side of the railway line was a collection of factories and workshops, and the M60 hummed in the distance.  There was a vague undersmell of sewage.  The road was rough and badly tarmacced.  A stray dog stared at me from the opposite side of the road, briefly breaking my heart before running on (stray dogs are my Kryptonite, a swift short cut through my cold brittle exterior to my soul).  At a turn I caught a glimpse of the city in the distance.  The tall apartment blocks shining, tastefully lit with glowing LEDs, the Beetham Tower's clunky profile topped by blinking aircraft alert lights.  It seemed so close and, at the same time, impossibly distant. 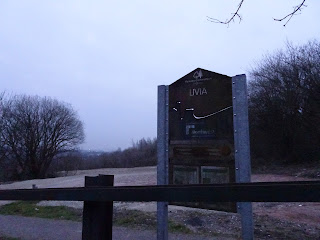 The scraggy grasses and bare trees accompanying my walk were all part of LIVIA, the Lower Irwell Valley Improvement Area.  I'm pretty sure I'm the first person who isn't a civil servant to use that acronym.  Perhaps, one day, this mess of former industrial properties, sewage works, disused canals and colliery workings will be a happy countryside stroll on which to frolic and picnic.  Right now, it's a lot of concrete that's become overgrown.

The odd homes were now, abruptly, replaced by an estate.  Set way back from the road, corporation houses in red brick.  A convenience store glowed brightly against a darkening sky.

I was going too fast to pay attention, too worried about reaching Swinton in the pitch black.  I cursed the BF.  I'd had a great, gossipy lunch with my friend Mike in Liverpool, and had emerged lazy and relaxed.  I didn't fancy heading over Chat Moss to Manchester any more.  As I mulled over whether to head home, the BF phoned, and encouraged me to go out.  "It's a great day for walking!" he said, and pushed me over the edge.  I'd ended up in the city centre, grumpily drinking chai lattes in a variety of chain coffee houses, bored, waiting for that single train to Clifton.  And now I was here, I couldn't really enjoy it. 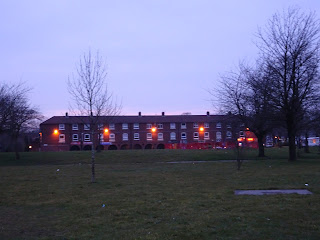 I mean, I know it's the outer edge of Salford, not the Hanging Gardens of Babylon, but there were still some pleasing buildings - that row of shops above, for example, with arched entrances to an arcade and flats above.  It came complete with the requisite number of bored teenagers on bikes, loitering at the side of Skittle'z off licence.  In the bus shelter, I was happy to see hand-written signs advertised an Easter Eggstravaganza on the green that Saturday, hosted by the Resident's Association - raffle!  Tombola!   Make a bonnet!

Further on, the husk of a pub made me want to cry.  Once the heart of the estate, now it was - whisper it - a nursery.  Turn it into a block of flats, a Tesco, hell, burn it down, but not a creche.  The devilish boozer was now a home for the Gruffalo. 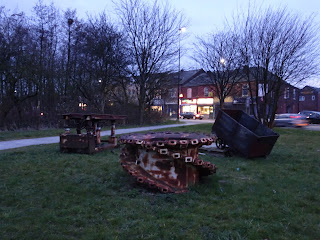 This sort of artwork is common right across the North.  I've seen it all over.  Bits of industrial machinery piled up on a patch of green.  It's saying, "we may not make anything any more, and you're all unemployed as a result, but doesn't it look pretty".  There was an explanatory board next to it which seemed to spend more of its time talking about the life of the Mayor than the actual history.

I was in the centre of Pendlebury now, a line of shops and pubs strung along the A666.  "Cobi's World Foods" advertised "fruits and vegs".  I imagined poor Cobi trying to get to grips with his sign - but more than one vegetable is vegetables; why is the shortened form just veg?  That makes no sense! - only for the locals to shrug and say, yup, making no sense is what the English Language is all about.  There was a karate school and a beauty salon called Rehab, then a working men's club in the shadow of a huge mill. 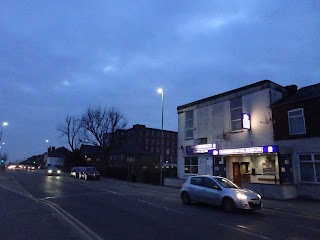 At one point, I should imagine the club and the mill were intertwined, the shifts pouring out the gates and into the bar, but now it was the Lowry Mill and filled with companies that seem to have been made up as a tax dodge.  Their website boasts that the newest resident is a "software service revenue specialist", which is just a load of unconnected words strung together so far as I can tell.  I very much doubt it has the kind of employees who'd frequent a working men's club, put it that way.

The sun was almost dead now, the sky the colour of a woodland pool.  LED street lamps flickered into life as I approached, always a slightly thrilling experience, as though I suddenly had power over them.  A trio of teenagers, two girls and a boy, wandered past, talking about nothing and doing lots of it.  A Salvation Army church, a patch of empty land, an off licence called H2O Liquor which was clearly owned by someone who didn't pay too much attention in chemistry.  I crossed the road with a mum and her toddler, the little girl ridiculously excited to push the button, to take a picture of Swinton's tiny square station building. 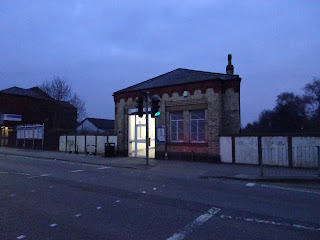 I'd managed to get there just in time, just before the last of the sunlight was washed away.  Against the cobalt backdrop that brightly lit ticket hall looked wonderfully inviting.  I crossed back, and was disappointed to find that while it was nicely preserved inside, there was no staff, no waiting room, just a hatch with a metal shutter over it.  And unlike Clifton's newly installed TfGM totem, Swinton's sign is just a strip above the door with GMPTE on it.  (Last year, Swinton got 126,000 passengers.  Just to compare and contrast with Clifton's 152.) 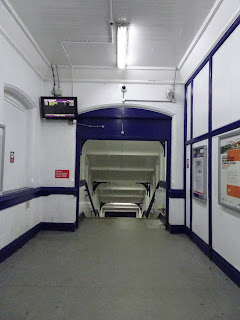 There was a much nastier surprise on the platform: boys.  Loitering, bored, teenage boys.  At what age do half a dozen pimply youths stop being wallpaper and become a source of terror?  Is it the minute you stop using Clearasil yourself?  I hovered by the steps, waiting for them to steal my iPhone or push me on the tracks, or worse, take the mickey out of my clothes and hair.  Finally one sidled up to me, drawling in his newly-broken Mancunian voice, "hey mate, d'you smoke?"

"No," I said, resisting the urge to throw all my money at him and run.  He shrugged and wandered back, walking like he had a bowling ball lodged in his underwear, and told them my reply.  The boys all laughed, and I waited for the inevitable mugging-slash-murder-slash-ruthless dissection of my physical flaws. 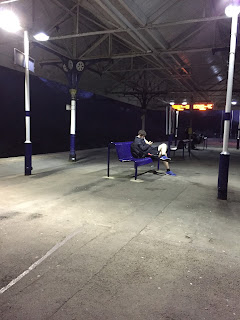 It didn't happen.  Of course it didn't happen.  Because they were just boys, looking for somewhere to hang out where their parents weren't, and finding a place where there was a seat and shelter and no adults.  They had no malicious intent at all.  The only thing that happened was a rugby player arrived to wait for the Wigan train, and to be honest, he was in greater danger of violation from me, because he was wearing shorts and was fit as hell.

The lights of the train suddenly penetrated the ink, and I clambered aboard a warm, glowing train.  Night was here.  Time to go home. 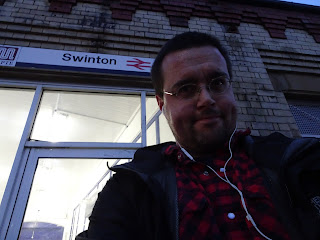 I went to visit Clifton last year and met, most likely, the same person you did. I struck up conversation and they said the two trains a day are timed perfectly for their trip to work when they need to be in the office. When you think about it, the trains are timed exactly for that: commuting. A much more useful parly service than the Denton one (visiting that one tomorrow!)

That's a long old working day though - eleven hours between trains. I hope your office worker gets his breakfast before he goes into the office.

Not sure if it was the same one. This bloke was in his fifties and very grizzled. He was more blue than white collar.