You'll be shocked to learn that, every now and then, I do put a bit of effort into this load of old tut.  A bit of reading up.  A smidgen of research.  Not too much - I'm essentially lazy - but for my trip on the Ravenglass & Eskdale, I went to the effort of buying Alfred Wainwright's Walks from Ratty. 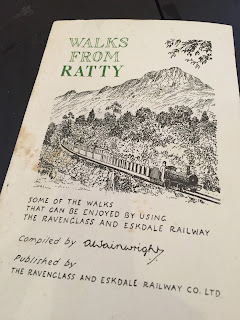 (The stains weren't down to me, by the way.  That was the work of the gentleman on eBay who sold it.  I'm trying not to dwell on them.)

Alfred Wainwright was deeply in love with the Lake District, and produced a number of books detailing its geography, its history, and giving the reader routes and walks.  Each one is joyous.  He hand illustrated them himself, detailed line drawings in black ink, and they're written in his own, meticulous hand.  They're miniature works of art.  To help raise funds for the Ravenglass & Eskdale, he published this tiny booklet, with ten walks from the line.

As it turned out, most of these walks were impractical for my purposes.  They were designed for lengthy rambles, for people who didn't have to match to a railway timetable.  One walk, though, 7: Dalegarth Force, caught my attention.  It was only a couple of miles and I could use it to fill the hour and a half between trains. 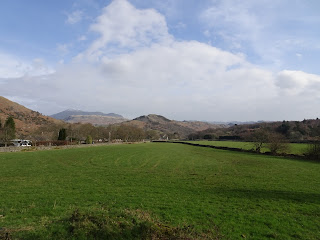 I struck out from Dalegarth station, heading away from the village on roads without pavements.  A little left hand turn and the road began to gently rise, narrowing, then turning from tarmac to gravel.  A bridge over the River Esk, ropeswings rocking in the morning breeze, then more upward trekking. 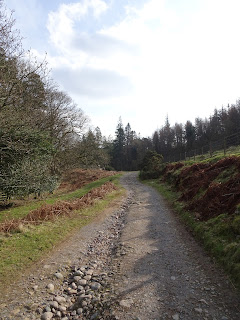 I was really pushing myself.  This was a detour away from the railway line, and so it carried with it a certain amount of anxiety.  If I'd been walking in the direction of Beckfoot station, I'd have at least had the comfort of knowing my train was close.  This was a mile long detour to the south though.  I walked fast, intent on reaching the Force without getting off timetable. 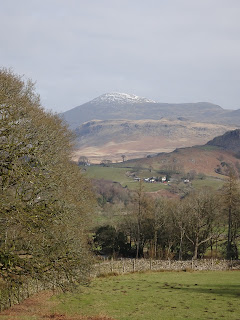 A gateway took me inside the woods of Stanley Ghyll.  It's a long gulley, twisting its way down to the Esk, with ancient trees lining the cascading stream.  The waters were full with February rain, and the path was damp. 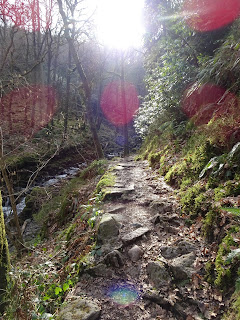 Moss clung to every surface, cool and soft.  It was as though I was entering a secret world.  Each twist of the rocky path took me a little higher.  The trees leaned in and closed off the sky. 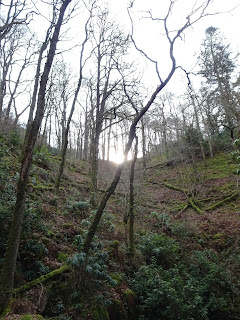 I was excited.  The thrill of exploration, the isolation, the knowledge that I was utterly alone.  This added an undercurrent of danger when I slipped a little, and I pictured myself tumbling into the stream and drowning.  My blue-faced corpse would be found by a pair of athletic walkers later that day, wedged up against a rock in an undignified fashion.  I walked a little more carefully after that. 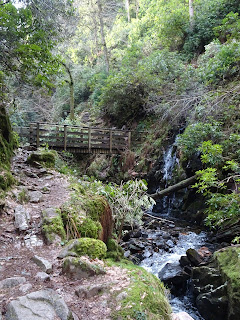 Now the ghyll was a proper gully.  Dark rock rose above me.  I crossed one bridge over the water, then back, the path following wherever there was a patch of flat.  Except it wasn't a path now; it was steps, big chunks of rock wedged into the earth, taking me higher.  The drop down to the water was getting more vertiginous.  I tried not to think about it. 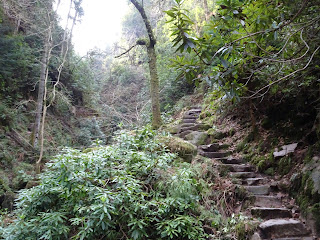 The noise had increased, too.  As the stream became more active and violent, so its cascades echoed more, crashing off the walls of the ghyll.  I climbed a bit more and spotted, through the trees, a waterfall.  It was sort of sideways, and concealed by branches.  I felt a moment of disappointment: was that it?  Was that the "force" that Wainwright had waxed about?  I turned over the a third bridge, climbing over a warning sign halfway that the path was steep and slippery, and onto another set of steps.

The sign wasn't lying.  These were tight against the wall.  With one hand on the rock face, I guided myself up and round the corner.  Then I gasped. 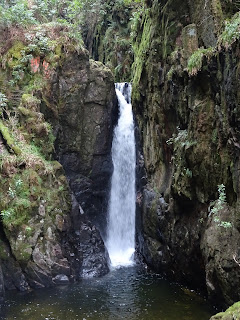 Stanley Ghyll Force is sixty feet of rushing, plunging water, pouring down into a still pool.  I stood on a square of flat land and watched it, open mouthed.  Something about it all - this quiet spot, the plunge, the loneliness - grabbed hold of me.  I couldn't move.  All I could do was stare at it.  Me and the waterfall. 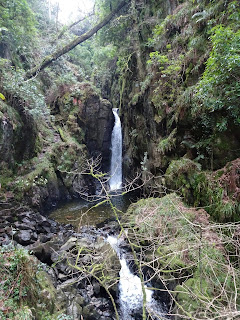 If I was a braver man - or at least a man who could swim - there would have been no greater pleasure to me than to leap down into that pool and dunk my head under the water.  Instead I just stood and watched.  Finally, a little alarm at the back of my head reminded me that I had a train to catch, and I turned away. 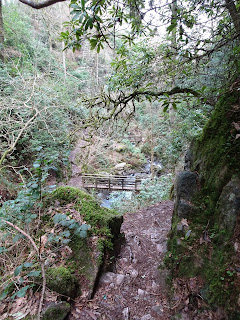 I walked back down the canyon, idly wondering what punishment would be suitable for the idiots who'd spraypainted the rocks by the waterfall.  Was castration too harsh, or too lenient?  On the way, I encountered a couple of walkers on their way up, and I wanted to stop them and tell them it was fantastic.  That would have spoiled the surprise and the delight for them though, so instead I just smiled conspiratorially. 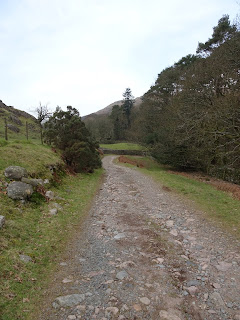 At the foot of the hill I turned left again, arriving at Beckfoot sooner than I'd expected.  It's the first station after Dalegarth, barely a half a mile away, and I'd arrived way too soon.  I now had twenty minutes to kill, waiting for my train, twenty minutes I could have wasted staring at that waterfall.  I took a seat on the steps up to the platform and waited. 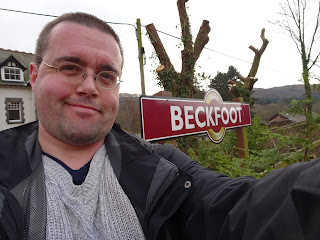 The quiet of the Lake District landscape was suddenly interrupted by a cacophony of braying voices.  Four people, two men and two women, wandered round the corner.  They were lost.  I knew this because they kept shouting "yeah, but WHERE IS IT?" at each other in thick Mancunian accents.  They were not dressed for the countryside.  None of them had coats.  The two women wore heels and had handbags wedged in the crook of their arms.

They wandered around for a bit, staring in the garden of the hotel across the way, poking their head over walls, looking at me with undisguised amusement.  Then they turned and went back the way they came, still looking for... something.  Still shouting at one another. 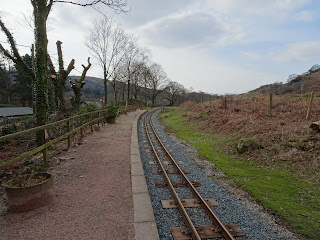 I suppose I could have helped.  Offered to check my OS Map for them.  Asked them where they were going.  But I didn't because, quite frankly, this is an overpopulated little planet, and letting those four idiots wander across a Fell and die of exposure would have been a service for all of humanity. 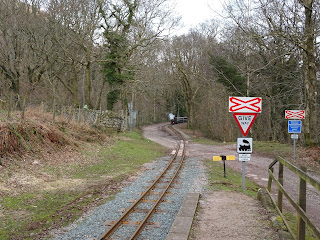 The steam train whistled as it rounded the corner.  I'd got a diesel up to the top, but I was going to be steaming back down again.  I asked the guard to stop at The Green.  "For the pub?" he said.  "That's the only reason people get off at The Green.  For the pub." 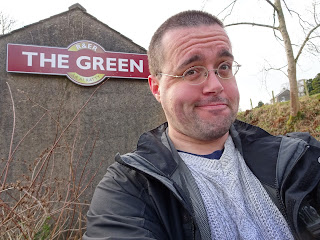 I didn't actually know there was a pub at The Green.  But now that I had the idea in my head... 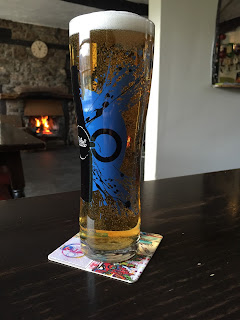 Email ThisBlogThis!Share to TwitterShare to FacebookShare to Pinterest
Labels: Beckfoot, Ravenglass & Eskdale Railway, something really rather wonderful, The Green

That's a great photo, with the little train steaming around the corner towards the level crossing