End of the line.  Closing bell.  Last call.  It's the end of Northern Rail.  Tonight, the franchise to run trains across the north of England passes to a new company.  They started the process a few weeks ago, stripping logos off the trains, covering up the name on station signs with a strip of duct tape.  The long goodbye. 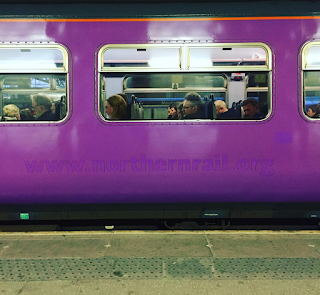 It's a sad day.  Northern has become so much of my life over the last few years.  They've gone from those odd purple trains on the Manchester lines, the ones I'd see here and there but never actually use,  to familiar, comforting, beloved.  I'll see the train roll up and a smile will split my otherwise miserable face.  The mauve highlights all over some station in the middle of Yorkshire.  The face of another station supervisor.  The known of the logo, the benches, the colours.  A haven that became sort of mine in the middle of a rainstorm in Northumbria.

Northern had a terrible job when they took over.  The franchise was just to tread water; they weren't to expand, they weren't to improve, just exist and make sure the trains didn't, you know, fall off a viaduct.  They were given a bunch of Pacers and Sprinters and told, crack on, and don't make too much fuss.

Yet passenger numbers kept going up.  Services suffered more strain.  Northern didn't crumble, or fall, or hand the franchise back to the government with a "sorry, can't cope" (unlike some train operators).  They plugged on.  They made it work.

I've said it many times, but Northern Rail is a weird franchise.  It's a load of disparate routes that have been lumped together.  How can you compare a tiny halt on the edge of Cumbria with a busy commuter station on Merseyside?  How is a long line across the top of England, like Carlisle-Newcastle, the same as the quick back and forth of Leeds' city routes?  It's 600-odd places arbitrarily connected by thin purple strips, but Northern brought them together. 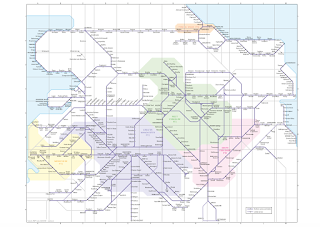 Not much will change, straight away.  The same staff in the same uniforms - even Alex Hynes, the sweet little managing director, will transfer to the new franchise.  Gradually, the changes will seep in, new signs, new fonts, new website; I'm not sure when a new map will turn up.  It won't be the same, though.  I'm not good with change.  I'm not good with goodbyes.  But it's still an end.

I am sure plenty of people will say "good riddance" based on things that were never in Northern's control in the first place. And it just makes me wonder what would have happened if they had been able to do stuff that was needed.

Dont ever get dewy eyed for TOCs, they'll do as little as they can get away with EVERY time