Far Away, So Close

Penrith is far.  Far from anything.  I realised this when I came back from Durham.  The BF and I decided to make a trip out of the return home, driving up the east coast to Berwick, across the top of England, skipping back and forth over the Scottish border as we went, then joining the M6 at Carlisle.  It was a long time, whizzing along at 70 mph, before we encountered the junction for Penrith, and even longer after that before we encountered the blessed sanctity of Tebay services for a Fairtrade coffee and a locally sourced scone.  Penrith is far. 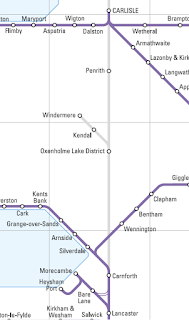 Even on the Northern Rail map it looks isolated and lonely, only added in 2013 when they conceded that there was a quicker way to get to Carlisle from Preston than via Barrow.  Now it sits in the centre of white space, lonely.  It was a station I would have to make a concerted effort to visit and, since it'd take two and a half hours to get there and involve two changes of train (one of which was in Wigan) I'd never really broken my neck.

The trip home from Ravenglass, however, included three quarters of an hour waiting at Lancaster between trains.  Lancaster is also on the West Coast Main Line, so, even though I was desperate to get home, I jumped on a Pendolino and headed up to Penrith for a box-ticking exercise.  (I bought a ticket first, obviously). 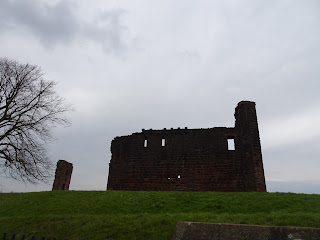 It started well.  Walk out of the station and you're immediately presented with the ruins of the town's castle, an impressive "take that!" to arriving tourists.  There's not much of it left, to be fair, but it sits on top of a generous mound of earth and catches the eye.  I crossed the road and entered the park at its base.  It was empty, too late for the early morning dog walkers and too early for bored schoolkids on their lunch, and the flower beds were promising rather than pretty.  Better entrance to the town than a ring road, though. 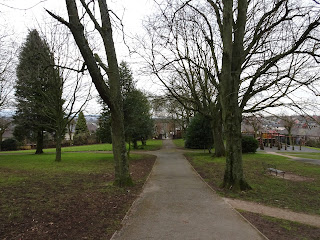 The park deposited me, not in a bustling high street as I'd expected, but in a suburban crescent; I was still a couple of roads away from the centre.  I descended a series of steps down the hill.  I've always found steps in a town a weirdly exciting feature, like a bit of a Tuscan hill town has crashed into England.  Even if, as in this case, it was rather more concrete and rusted metal than elegant terrace. 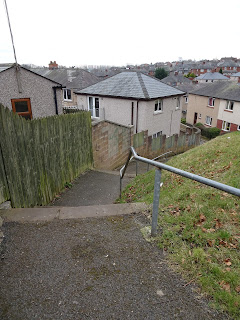 It lead me to some busy back roads and the goods entrance of Penrith Sainsbury's.  It was built on the site of the football club (they were shunted out to the edge of town), and a quick Google search reveals that people weren't especially keen for them to arrive.  Presumably as a sop to the objectors, the supermarket was upgraded to be a bit more than the standard "big box with a lot of orange".  They got a stone portico. 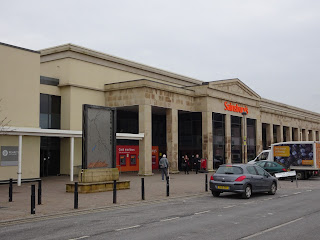 It's a bit like trying to hide a nuclear missile by putting a bobble hat on the top.  The effect is so lazy, so perfunctory (they saved themselves a few quid by not having the stone part reach the top of the actual building, you notice).  It has the unintended side effect of making it look like Sainsbury's demolished some worthy piece of municipal architecture but were forced to keep the front.  It paints them as vandals, rather than charlatans. 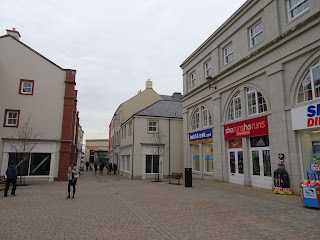 The New Squares development behind the supermarket continues with the fake-heritage theme.  I'm totally in agreement that the Georgian and Victorian eras produced some beautiful architecture; the same with the Edwardians and a whole bunch of other bits of our history that weren't named after monarchs.  That doesn't mean that in the twenty-first century we should be building copies.  Instead we should be building our own heritage, twenty-first century buildings that look like they were built today, not Disneyland fakes. These buildings might be covered in cornices and arches and porticos, but they were designed on computers and built out of steel.  The "heritage elements" are just a thin skin over the modern bones.  Architects are so afraid of repeating the "mistakes" of the Sixties and Seventies, when people tried to create a new language - and whether they were mistakes or not is very much up for debate - that they've ended up not innovating at all.

I'm not saying that Sainsbury's should be allowed to just plonk an aluminium shed wherever they want, or that retail parks are somehow at the vaguard of cutting edge architecture.  I just want a bit of honesty and style and imagination.

New Squares had been promoted as a regenerative tool for the town but it didn't seem to be working; half the units were empty, with signs in windows pleading "Thinking of taking retail space in Penrith?  Don't!  Not until you've spoken to us!".  Funny how building a superstore that offers food, clothes and household goods all under one roof seems to put people off opening a rival next door.  There certainly didn't seem to be any local entrepreneurs, only the usual chains - Costa, Boots, mobile phone companies. 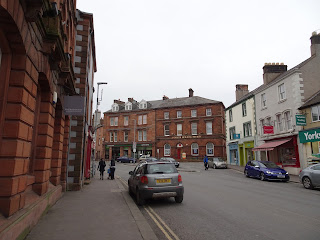 Unsurprisingly, Penrith's real town centre was far better, mainly because all those buildings were real relics from past centuries.  Streets twisted in and out of each other, the buildings almost bending over the pavements.  I felt resonances of other towns I'd visited across the Lakes and Pennines in the buildings and the people, a busy-ness, a hardiness. 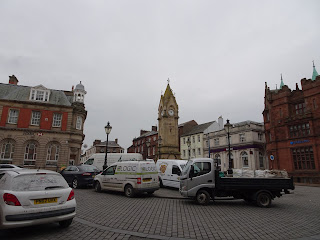 Although I will never be happy with people parking all over the market square like it's the loading bay of B&Q.  One accidental reverse gear and that clock tower will be crushed under the weight of a white van.  It was still a busy centre for the town, with an absolute delight in the form of J & J Graham, who've operated in the town since 1793.  Take that, Saino's. 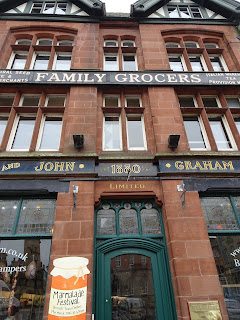 Also intriguing was this sign, affixed to a nearby lamp post and part of an Eden Arts project. 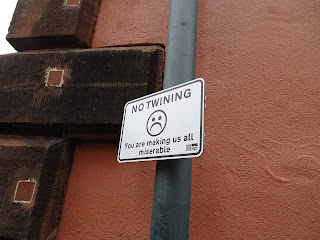 I immediately resolved not to do any twining, even though I'm not entirely sure what it is.  Are Penrith finally dealing with the scourge of yarn bombers?  (I'm not bothered by them, but the BF once spotted some trees in Greasby that had been dressed up with coloured wool and went off on an incandescent rant that lasted all the way to West Kirby).

I continued my circuit of the town centre, finding more delightful local stores; I imagine one advantage of Penrith's isolation is the lack of competition.  By the time a rival swaggers into town you've built up a loyal customer base.  Even some of the empty shops had their charm - one had net curtains in the window, as though hiding its shame. 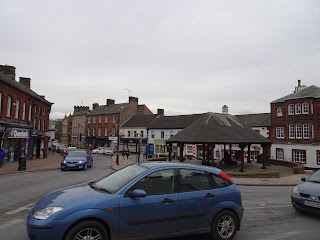 By now I had a different aim in mind: an urge to pee.  It had become rather more insistent in the frosty February air and, not spotting an actual public convenience (and, if I'm honest, not really wanting to go in one of those grim tiled cells) I nipped into the Station Hotel for a pint and a piss.  From there it was a skip across the McDonalds' drive thru lane to the station itself. 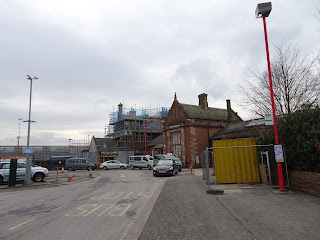 It's a charming building, though quieter than in its heyday due to the loss of branch lines; it's only served by Virgin trains now.  They've infected the station with their "quirky" branding, and I'm sorry, this really must stop.  You're a public transport supplier, not a lower billed act at the Royal Variety Show: show a bit of dignity and composure. 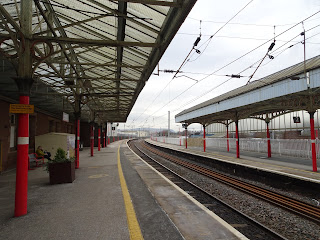 So that was Penrith.  A fair old trek, but worth it in the end.  Probably not worth a revisit, but at least I can say I've been. 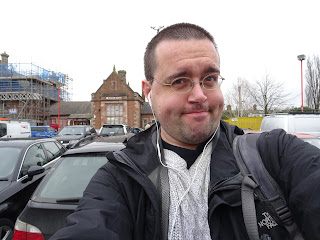 (Yes it does say Penrith station there, I promise.  Use your zoom.  And petition the town council for a proper sign).
Posted by Scott Willison at 10:26

Quite a long-distance photo there, at the end. Too many people in the way, closer up?

There was a very narrow pavement, a busy lane in the car park full of car dropping people off, and some big burly builders loitering who I thought might laugh at me...

Twining is local dialect for whinging or complaining.

So with you on 'chummy' brands. This is a good read on that subject: