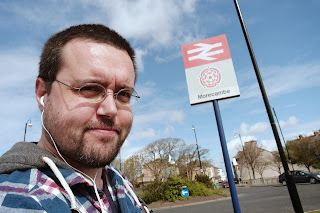 I went out on the trains last Thursday.  You remember that day?  May 7th?  The day hope died?  I couldn't face sitting in all day, tense, so I got a Lancashire Day Ranger and headed to Morecambe.  (I voted first, of course). 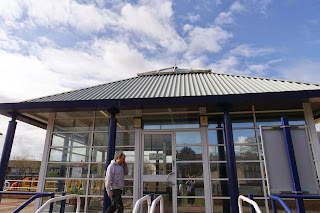 It's not the greatest station building in the world.  It's very much from the "security hut on an industrial estate in Stoke" school of architecture.  The line used to go all the way to the seafront, but in the 90s, the lines outside the station were rationalised.  I can imagine someone from Railtrack whispering to the Council at the time - "are you sure you want us to build the new station all the way down by the sea?", and a sad little mayor sighing and saying, "no point, is there?  Build it in the town." 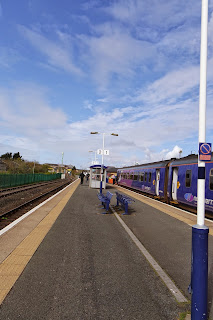 The track was lifted and a retail park was squeezed into the space it used to occupy.  There's a Morrisons there now, and a Frankie and Benny's, and the giant blue and yellow sign of Blockbuster Video still towers over the station. 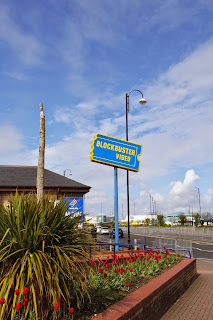 I went for a job at Blockbuster, in the early 90s when I was at Sixth Form.  This was when every film fan in the world wanted to spend their days stacking videos and pretending they were Quentin Tarantino.  I was hopeless in the interview, as usual, and completely threw it away, but just twenty-odd years later they went bust so who's laughing now?

The presence of a Blockbuster sign seemed strangely apt in Morecambe.  It was a town with both feet in the past.  It wasn't nostalgia, just the air of a town that really preferred how things used to be and didn't relish change.  I walked into town past a telephone exchange, its name spelled out in a fantastic 1960s italic, and then past a dinky Arndale Centre that carried the scars of at least three different makeovers. 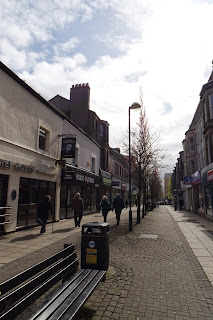 The shopping streets were narrow and a little claustrophobic.  When it briefly opened up into a square, a policeman was tipping a can of cider down the drain while the two local pissheads stared at it frothing into the sewer with sad eyes.  It was 10:30 in the morning, by the way.  The streets twisted and turned, small one-off businesses flogging mattresses and ice cream, a sex shop called Sin-till-Late (it took me an embarrassingly long amount of time to realise that was a pun; I thought it was a reference to its opening hours).  But then I reached the front, and all was forgiven. 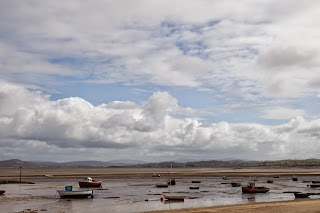 Blackpool, Morecambe's louder, bigger brother to the south, can't compete with the view.  They just have the endless rolling grey of the Irish Sea.  Here you've got the expanse of Morecambe Bay, that magical stretch of water that recedes over the course of the day to reveal endless flats of shifting sand.  Behind it the green hills of the Lake District puncture the horizon, their moisture churning out only the softest, most grandiose clouds. 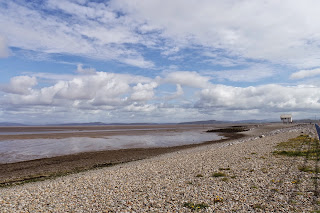 The Bay is simultaneously Morecambe's joy and its curse.  That stretch of water defines the town, but it also isolates it.  The beauty of the Lakes is within touching distance, but the only way to reach it is by boat or, far more dangerously, to pick a route through the quicksands the sea leaves behind. 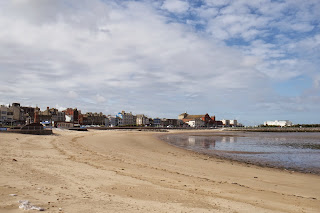 I followed the coastline and thought about the Queen's Guide to the Sands, the man who gets a grace and favour cottage in return for being the only one to know the route across the Bay.  What a job!  How fantastic to be the one who knows the secrets of the dangerous tides.  I wouldn't take it myself - far too much of a coward - but I'd love to be guided across one day.

The seafront is peppered with artworks and benches, most of which were being ignored by the joggers and dog walkers.  There were hotels too, seafront homes knocked through and with a glassy breakfast room on the front to unify the building.  They had sturdy names like the Auckland and the Cromwell, and I pictured landladies with pinched mouths and flowery bedspreads.

Then I reached Eric. 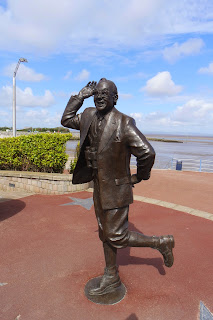 I absolutely, unequivocally, unironically love Eric Morecambe, perhaps the town's most famous son.  I didn't really discover him until I was a teenager - he was on ITV when I was a child, and watching ITV was one of those things you only did under suffrance - but I watched a compilation one Christmas holiday and laughed until I cried.  The man was a genius and I will not take with any argument otherwise.  When the Guardian did a piece on whether old comedies were still funny, they called Morecambe and Wise "so-so" - "the sketches drag on and Ernie's interminable Plays Wot I Wrote aren't really funny on any level".  This prompted a rage in me so violent my eyeballs popped right out of my skull and I had to retrieve them from the living room floor.  Not funny on any level?  The Morecambe and Wise "Cleopatra" sketch with Glenda Jackson is a high point for British society - not just comedy, not just television, our entire way of being.  I could watch Eric fiddle about with a Roman bust while Glenda tries desperately not to laugh on a loop until I die.

This is the point in any tribute to Eric Morecambe where you mention how good Ernie Wise was and how great Eddie Braben's scripts were, and they were, but they weren't Eric.  Eric was just so fantastic.  Eric was a force of absolute joy that we were lucky enough to be around. 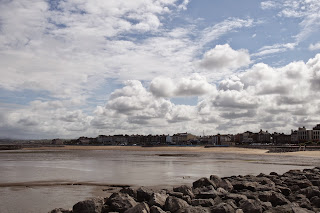 I walked away from the statue singing Bring Me Sunshine to myself, because of course I did (the BF prefers Following You Around, but I'm a traditionalist).  The road curved round a small park and then I had a great view of the Midland Hotel. 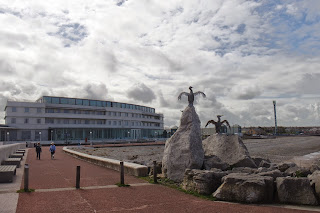 Built in 1933 by the London, Midland and Scottish Railway Company, it's a heady slice of Art Deco that feels completely at odds with the rest of the town.  It's cocktails on the terrace while the rest of Morecambe is pints of bitter in a boozer with stained carpets.  After the war, with the decline of seaside trade, the hotel floundered, but it was restored in the 2000s as a piece of theatrical luxury. 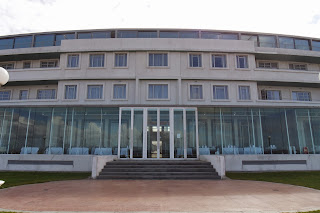 I'd probably last about thirty minutes in that hotel before I became impatient for someone to be murdered and Poirot to make an appearance.

The Midland was built with its convex side facing the sea, while the concave side faced the railway station to enable the minimum of fuss in transfers.  The old station is still there, converted into a performance space, and while it was nice enough, I wished it matched the elegant lines of the hotel. 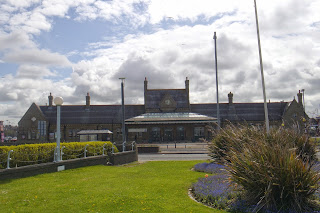 The signs outside the old station - now called The Platform - advertised lunchtime concerts and evenings themed around brass bands and discos.  A pub had been wedged into one end, but at the other, a garish entrance to KFC had crashed into the Victoriana, as incongruous a sight as Benjamin Disraeli eating a Family Bucket. 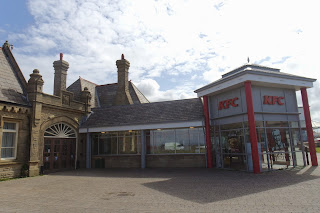 Get over the road next to Aldi where you belong.

The old, sad Morecambe soon reasserted itself as I headed south.  There was the sad, fenced off space of Frontierland, Morecambe's Western-themed amusement park, now just a stretch of hoardings with a water tower and a clapboard pub advertising Sky Sports.  Why can't we do amusement parks any more in this country?  It's basically Alton Towers and that's it.  Have we evolved beyond the cheap thrill of a roller coaster?  Are ghost trains simply too tame next to a first person zombie shoot-em-up? 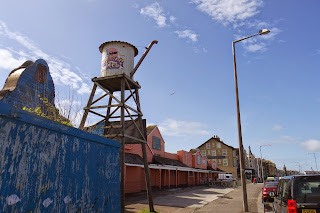 The only thing poking out from behind the wood was the tower of an abandoned thrill ride, still marked out with its Polo sponsorship.  I saw Robert at the weekend and he told me that the attraction has only been allowed to stand because it's handy as a mobile phone mast; an easy way to gauge how the priorities of today's kids have shifted. 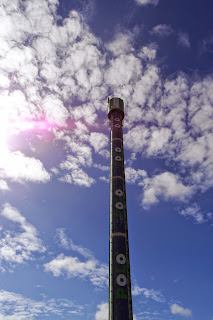 I was mostly taken with the Polo marketing.  Remember when corporate sponsorship involved brands you'd actually heard of advertising things you could actually buy?  Now it's anonymous insurance companies and online betting sites and banks.  Where football teams once ran past ads for cars and sweets and biscuits, now it's unidentifiable companies called Global Solutions or Paravex or Nestar.  You need to visit the website just to find out if they're a new prescription drug or an oil pipeline. 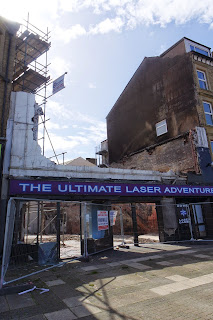 Things got even less glamorous the more I went on.  There was the laser quest building above, which, I'm guessing, teenage boys would probably have found more exciting to play on in its current state.  The hotels became small, grim-faced B&Bs, places that shouted "En-suites available" as though that was something to be proud of.  Perhaps I've just been spoiled, but in 2015, I expect my own toilet when I travel.  Call me fussy.  Still, one place actually listed "Colour TV" as a selling point, so it may be that I'm just out of sync with the hospitality industry. 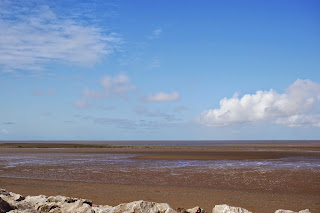 This has been a bit of a melancholic, moany post, and I can only apologise.  Retracing my thoughts as I looked at the pictures just made me sad.  Morecambe is a truly beautiful spot, but it's not got a real role in the 21st Century.  It's analogue in a digital world.  But it gave the world John Eric Bartholomew, lover of Luton Town FC, player of all the right notes but not necessarily in the right order, king of the paper bag trick, and so Morecambe will always get my thanks and love. 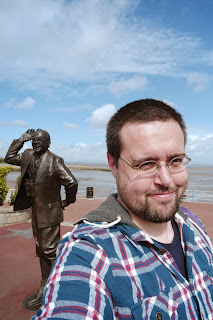 "He won't sell any ice creams going at that speed".

I saw an interview, apparently unscripted, with him after he was awarded the MBE or similar. Just as funny. A genuinely funny man.

There's no answer to that!

i love Eric too, big part of my growing up, so much that for a birthday my wife got me a replica of the statue from the sculptor, it's only just a foot high but sitting by the fire it makes me smile every time I look at it

Well,somebody's got to say it.
What do you think of Scott's blog so far?

Can I put in a word for Positive Thinking and Don't You Agree from Eric and Ernies radio version of M&W?

Wish you had popped into the Midland hotel: I suspect the refurb is more 'stylish' than authentic to the Art Deco original: it's not clear to me if Eric Gills famous frieze of Odysseus is actually still there in situ or not?

Happy travels, good to see you back this side of the herring pond !

I would have liked to have visited the Midland but (a) it was 10:30, so they were still setting up for tea/lunch after breakfast - I could see them laying the tables - and (b) I was anxious about getting that one Heysham Port train. If I'd known I'd be spending an hour in a ferry terminal drinking tea out of a machine I would probably have ventured inside.