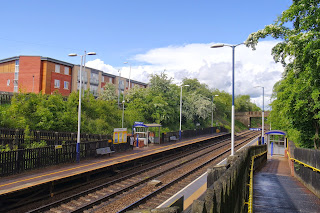 A clever man would have thought "twelve miles of walking - that's enough for one day."  I am not a clever man.

For some reason, part of me thought, "hey, why not chuck another couple of stations in there?  They're only a mile and a half apart!  You could practically jump that!"  On a normal day, yes.  As it was, I hobbled off the train at Goldthorpe.  One of my legs tried to seize up on the train, resulting in a great deal of panicky flexing. I had at least one blister I was aware of; my other foot was numb, so at least I didn't have any pain there.  My legs no longer met in the middle, so I walked like Fay Wray after her first night with King Kong. 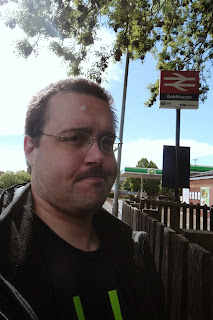 The coat was back on.  The rain shower at Thurnscoe had turned out to be brief but violent, but it had taken me so long to get the sweaty mess out of my bag and onto my body - the wet sleeves causing me to shudder as I dragged them over my naked arms - that I'd decided to just put up with it.  If it turned me into the walking equivalent of Count Lippe in a steam cabinet, so be it; I just wanted this damn thing to be over with. 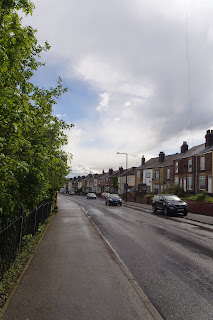 The more I walked though, the better my legs got.  They readjusted to the movement, and soon I was walking at my normal pace.  It helped that there was a downward slope from Goldthorpe to Bolton-on-Dearne, so I had gravity giving me a hand.  It's stopping that kills me; if I just keep going, I'm fine. 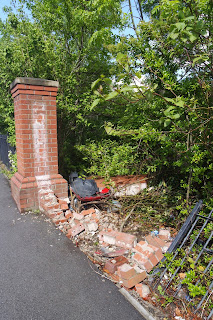 You don't need to be Sherlock to work out what happened here.

I passed houses and a school with a fence made out of brightly coloured giant pencils.  Ahead of me was a mum and a nan walking their little girl home from school, the girl doing figures of eight around them in her excitement at it being the end of the day.  Across the road, four teenagers still in uniform huddled together in a way that looked ridiculously suspicious.  There was probably one cigarette in the centre of that huddle and they were all daring each other to smoke it. 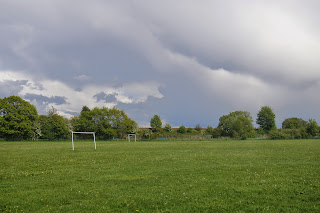 Google Maps tried to send me through a cemetary, but I ignored it so that I could go down Station Road.  I always like to follow the railway's legacy.  Twenty minutes after leaving Goldthorpe, and I could see the ramps and steps of Bolton-on-Dearne station in the distance.  I still had three quarters of an hour until my train, and now I felt positively buoyant, so I turned left into the village to buy a drink. 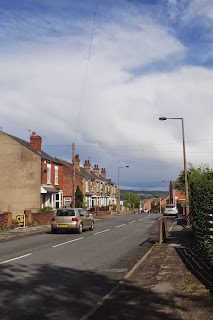 When I am Exalted Leader of the Universe, every station will have a small shop attached.  Just a little one that sells papers and sweets and drinks.  Nothing fancy.  It'll be somewhere for commuters on their way into work, somewhere for mums to buy a liquorice stick to keep their kids quiet on the train.  It'll be the kind of place that'll stop tired and harassed bloggers from having to walk for frigging ages just to find a bottle of orange juice. 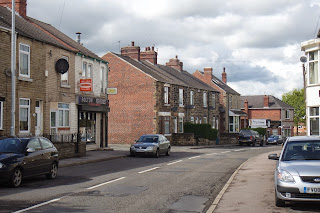 Chippies, hair salons, even a funeral director, but not one little Asian man in a corner shop.  Finally I happened across a Tesco Metro and I was able to finally get something to quench my thirst.  I even treated myself to a packet of Munchies.  When I was little, they were always on the expensive end of the sweets scale, so buying them now always carries with it a slight air of decadence.

I strolled back to the station.  There was a handy example of the decline of Western civilisation on the corner; a stout Carnegie Library that was now a fitness studio offering boxing and Zumba.  Books and knowledge had been replaced with weights and protein shakes and a reverence for physiques over brains. 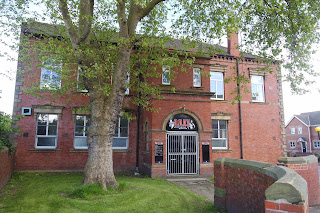 Bolton-on-Dearne station is just a couple of platforms.  There's no ticket office.  There's only a tiny car park.  It serves a small village.  Yet it has some of the most ludicrously over the top ramps and steps that I have ever seen. 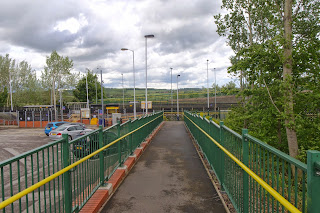 That's not a station, it's a game of Mousetrap.  I understand making a station accessible for all is a priority, and a laudable one, but there were ramps that lead to other ramps that lead to steps.  There were separate steps and ramps to access the same platform.  There was a bridge to cross the tracks, even though there was a perfectly good road bridge right next to it. 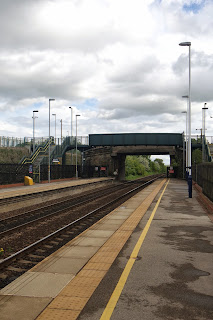 I wondered if perhaps they had a load of steel left over - perhaps Barnsley Council had aborted plans to build a replica of the Eiffel Tower - because I couldn't see any other reason for it all. 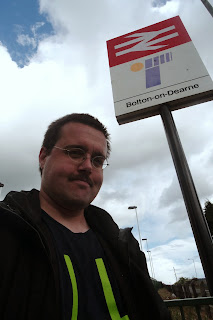 A train back to Leeds, and soon I was on the TransPennine Express to Liverpool.  I'd treated myself to First Class, and sat opposite me was a Virgin air stewardess.  We'd barely left Leeds station before she unpacked a mirror, two make up bags and a pair of hair straighteners.  Over the course of three quarters of an hour, she picked, shined and glossed every part of her face.  There were powders and creams.  She painted her nails.  She varnished her lips.  She plugged her straighteners into the laptop charger and created a new hairstyle for herself: straight on one side, curly on the other, the hair smoking as she forced it to comply.

What a faff, I thought.  Thank goodness I'm a man.  Thank goodness all I have to do to my face is wash it in the morning and shave it.  Apart from the moustache, of course.  That needs to be maintained.  That needs to be shaped and trimmed.  Grey hairs need to be carefully removed. Moustache oil might be needed to keep it in the correct style.  I might need to get one of those little face hammocks Poirot wears in Murder on the Orient Express.

I shaved the moustache off the next morning.
Posted by Scott Willison at 19:18

Shame. I was starting to get a John Hillerman vibe. The major in "Magnum, PI", surely you've seen it.

Bolton-on-Dearne had a barrow crossing until very recently - the footbridge is only 3-4 years old, I think.

Fnarf - You're the second person to say I look like the man from Magnum.

Neil - I couldn't see the point in having a footbridge as the road bridge seemed to do the job perfectly well!

If you wanna see what might be an even crazier disability-discriminiation-act compliant (and completely outsized, and slightly defective, and utterly impractical) staircase, I do recommend a trip to Charlbury station in the Oxfordshire Cotswolds (a rather nice village too even if far from Northern-land - allegedly the station escaped closure because the head of British Rail lived in the village - the area is worth visiting come what may). A second platform was reinstated a couple of years ago, and connecting the charming old platform to it is what can only be described as an enormous sprawling octopus of metal, painted in a surprisingly subtle tone that is kind of a cross between salmon and honey cotswold stone....

Loads of ladies do their make up on the commute into London, putting on false eye lashes always horrifies me given the train can be a little bumpy.