Among fans of railway architecture, Penn Station is spoken of with the disgust usually reserved for Nazi-supporting child molesters.  It's America's Euston, only much, much worse.  Euston was demolished in the hope of building a better station, one that was 20th Century instead of 19th, one that was modern and exciting.  Penn Station was built so they could sell the air rights for maximum profit. 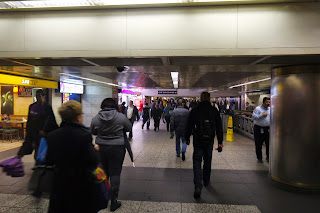 Now it hides under Madison Square Gardens.  If you ever wanted to see the US's attitude to train travel, look at Penn Station.  This is the main railway station for the greatest city in the country and it's an underground shopping mall with some tracks attached. 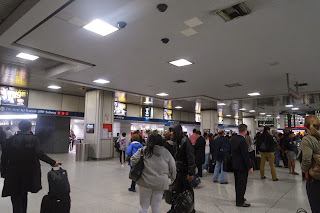 Actually, I'm being unfair.  Americans just don't use trains.  Amtrak's annual ridership is about 30 million people; that's roughly the same as Merseyrail.  And in 2014, Penn Station got 10 million passengers; Liverpool Central got 14 million in the same period.  Expectations are different. 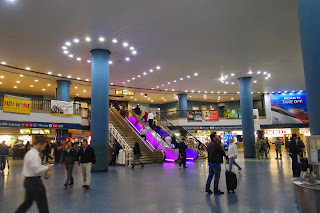 It's New York though.  Shouldn't they want better?  Penn is a windowless void, unfriendly and uninspiring.  The emphasis is on getting you the hell out of there. 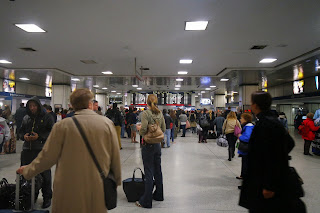 I wandered around, wanting to like the station.  Modern doesn't have to be bad.  Modern can be good. Old stations can be draughty and empty and impractical. 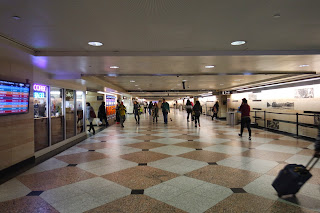 All I got was a stream of fast food smells, a Subway giving way to a KFC giving way to a Dunkin' Donuts, and then I was practically on my way down to the 3 train.  Next to Penn Station, Euston is a triumph of engineering, a moment of architectural beauty on a par with the greatest of man's achievements.  Although I will admit I haven't been back to Euston since they built the food mezzanine, so they may have knocked it down to Penn's level by now. 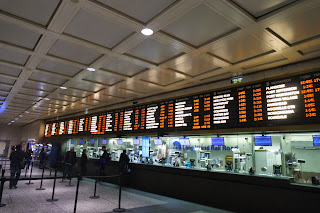 You also have the added inconvenience of the convoluted system of American railways.  Lime Street might be served by a number of train operators, but there's only one ticket booth, and the platforms are all in more or less the same place.  Penn has separate ticket windows for Amtrak, for the Long Island Rail Road, for the New Jersey Transit.  It's not built for friendly perambulating. 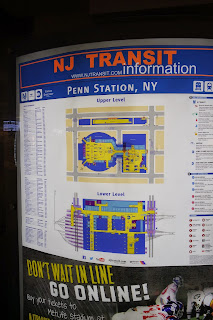 There was one, isolated moment of charm as I headed for the subway.  A piece of preserved artwork from the old, 1910 building had been preserved and inserted into a passageway.  Suddenly there was something beautiful.  It stood out like a sore thumb. 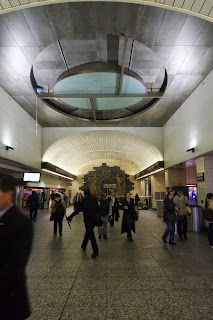 Art doesn't necessarily make everything better, as the mosaic in the subway station below proves, but it helps. 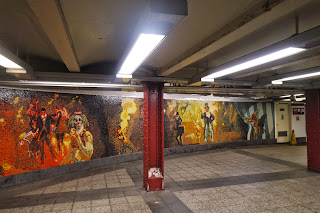 There are suggestions on how to make Penn better.  Most of them involve clearing the hell out of there.  Across the way is the Farley Post Office, New York's main mail centre.  It was built by the same architects as the old Pennsylvania Station and sits over the top of the same tracks so that mail trains could be serviced there. 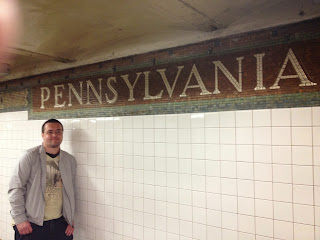 (Guest appearance from the BF's thumb in the corner).

Moving to the Farley would allow Penn to be closed and sold off, but as usual with anything transit related in New York, no-one actually wants to pay for it. 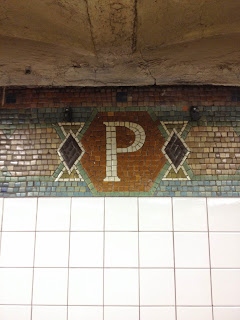 Also - let's be honest here - the real reason everyone hates Pennsylvania Station is nothing to do with the station itself.  It's just not Grand Central, and so it will forever be judged harshly. 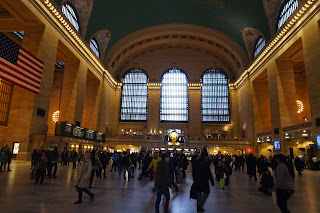 Grand Central Terminal (never station) is one of the most beautiful buildings in the world.  Not just railway buildings: any kind of building.  Grand Central is so wonderful it makes me want to fall to my knees and kiss the ground to pay proper homage. 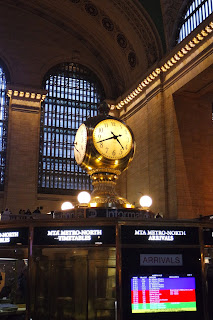 Grand Central is a triumph of Beaux-Arts design, a triumph of planning, and a triumph of transportation usage.  It flows.  It's busy, but not overwhelming.  The crowds make enough noise for a pleasing hubbub, but not enough to drive you insane. 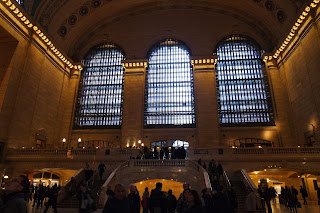 Every element of the station has been thought through.  Head downstairs and you hit the Dining Concourse.  It was revamped in the nineties, and could have been made tacky (I'll say it again: dining mezzanine in Euston).  Instead it's just another gorgeous space. 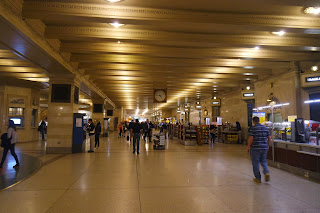 The real highlight of Grand Central eating is its famous Oyster Bar, but (a) I don't really like oysters and (b) it looked far too posh for me so I just cowered outside.  I did make use of the famous "whispering gallery" outside though, where the arched brick roof means you can murmur to someone on the other side of the room and be perfectly heard. 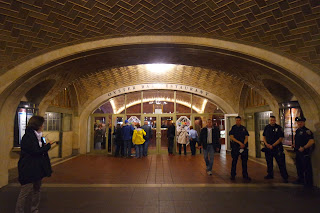 This is just turning into a series of ecstatic emotions, isn't it?  I can't help it.  I'm not very good at writing nice things, and Grand Central inspires nothing but love in me.  I'm a fan of railway architecture and this is as good as it gets.  Just the best. 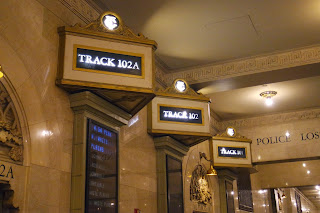 Is there a bad part to the station?  Well, the platforms are a bit shitty.  But by then you're on your train so you don't care. 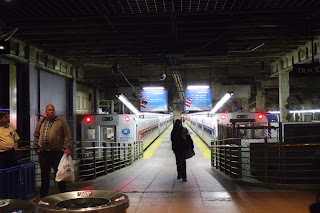 Even the ugly bits look kind of beautiful in the right light though.  Damn you Grand Central!  You just can't help yourself! 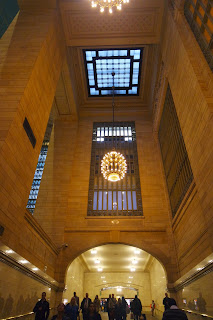 There are also extensive shopping options throughout the terminal - even an Apple Store - but you wouldn't know from that Main Hall.  That Hall is it.  A huge, open space for people to pass through without stress or panic.  You don't have to be a "consumer", you don't even have to be a passenger.  You can just walk in and marvel at it. 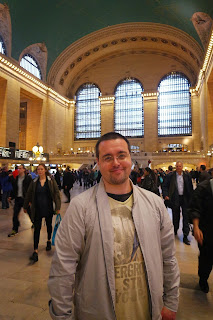 There were plans in the 1960s to build a skyscraper on top of Grand Central; it would have obliterated the waiting area and been even higher than the Pan Am building that was built.  The railroad company took the city to court to try and get a preservation order removed, arguing that it was a land grab and probably Communist or something.  I think it shows what a wonderful civilisation we live in that the people who wanted to destroy Grand Central have been allowed to continue to live and thrive in polite society.  Personally I'd have had them killed and dangled from the ceiling. 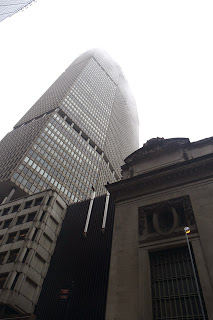 Perhaps we should thank Penn Station.  Its overwhelming awfulness reminds you how amazing Grand Central is. 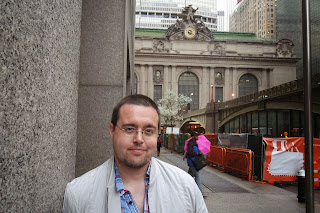 Oh, I just want to go back now. 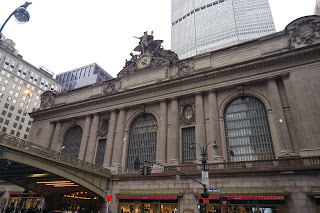 The original Penn Station, on the same site, was if anything even more beautiful than Grand Central. It's demolition in 1963 was one of the great tragedies of urban vandalism, and the protest movement that tried to prevent it inspired the modern historical preservation movement that has saved so many other great buildings since then.