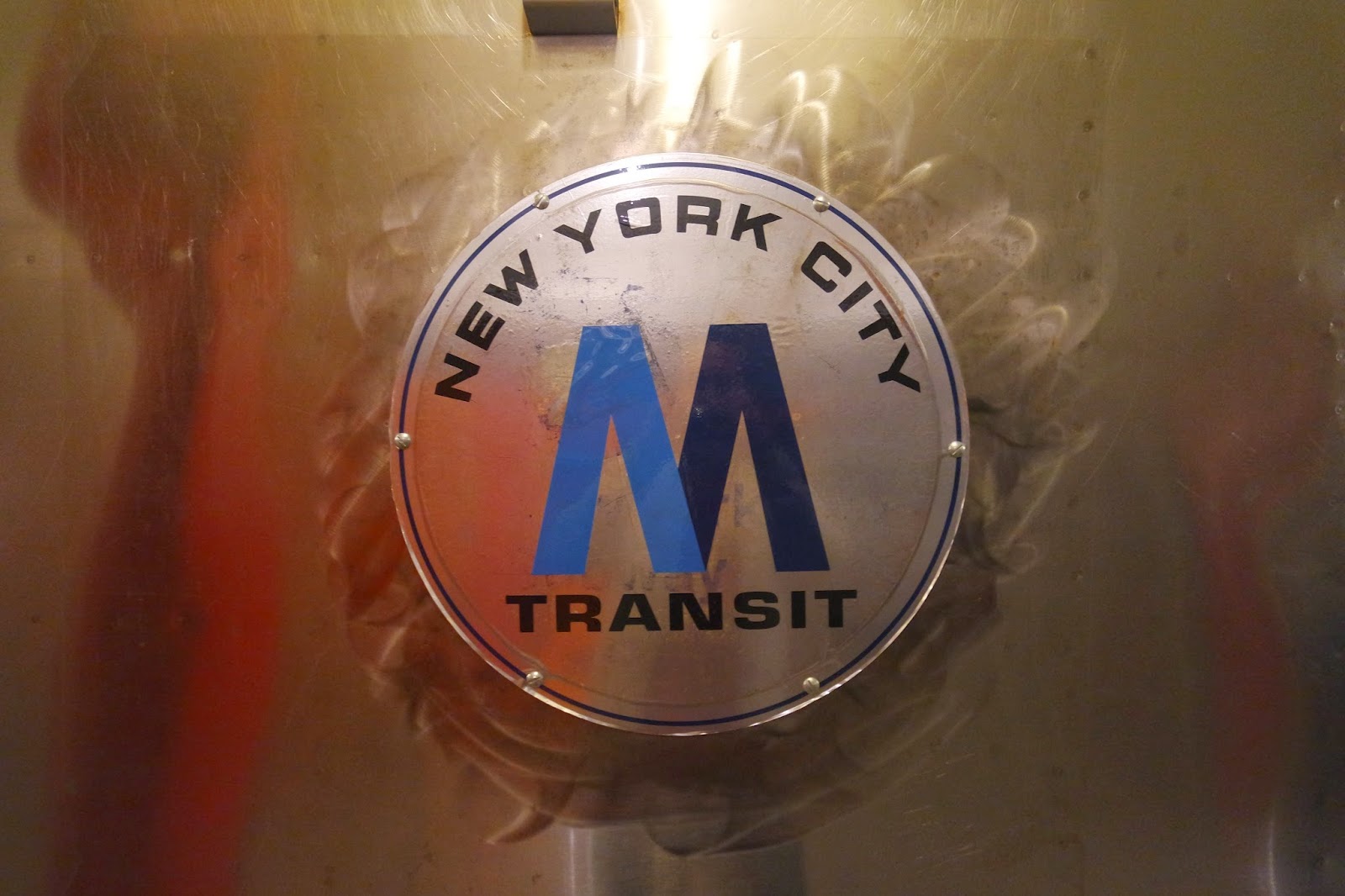 The Bicentennial celebrations in 1976 were a cause for celebration across America.  Fireworks, parties, lots of truly awful tv specials filled with bad wigs; it was everything you'd expect from the Land of the Free.  In New York City, a temporary exhibition charting the history of the subway was opened in a decommissioned subway station in Brooklyn.  Nearly forty years later, it's still there. 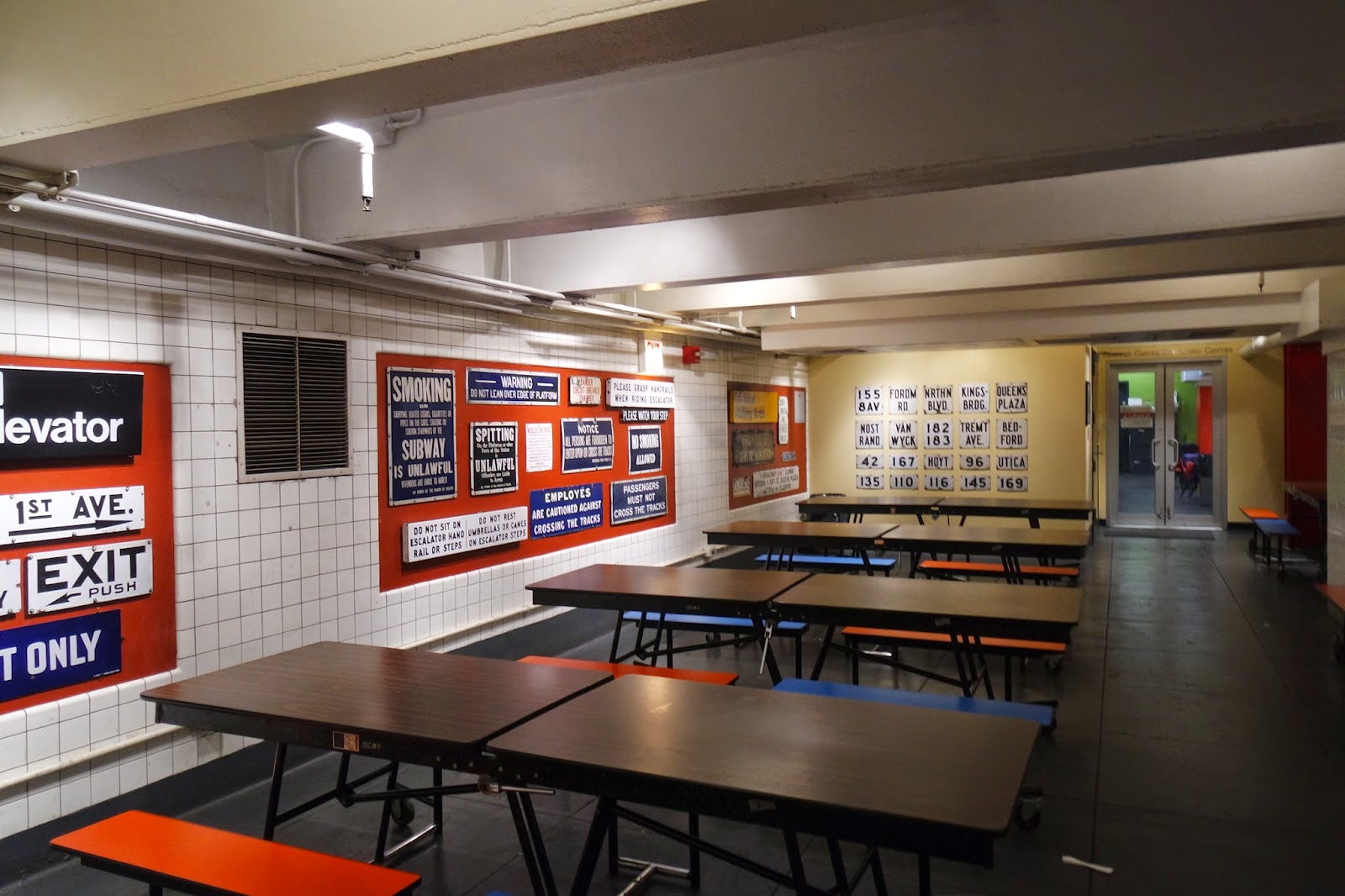 A little bit ramshackle, a little bit cheap, the New York City Transit Museum exists almost despite itself.  The upper floor is divided into a number of exhibits - how they built the subway, the history of the bus network, a long exhibition about electricity which was probably paid for by ConEdison.  When we visited there was a part of excitable school children visiting, who succeeded in killing off any parental instinct I had.  You've not known hell until fifty loud screaming children have been allowed to run amok in an overheated underground space and you're not allowed to belt any of them. Bits of historic New York had been pulled off the walls of subway stations and installed at the museum.  It was interesting, but not captivating.  It was certainly no London Transport Museum, and I was about to write it off as nice but dull when I went down one floor more. 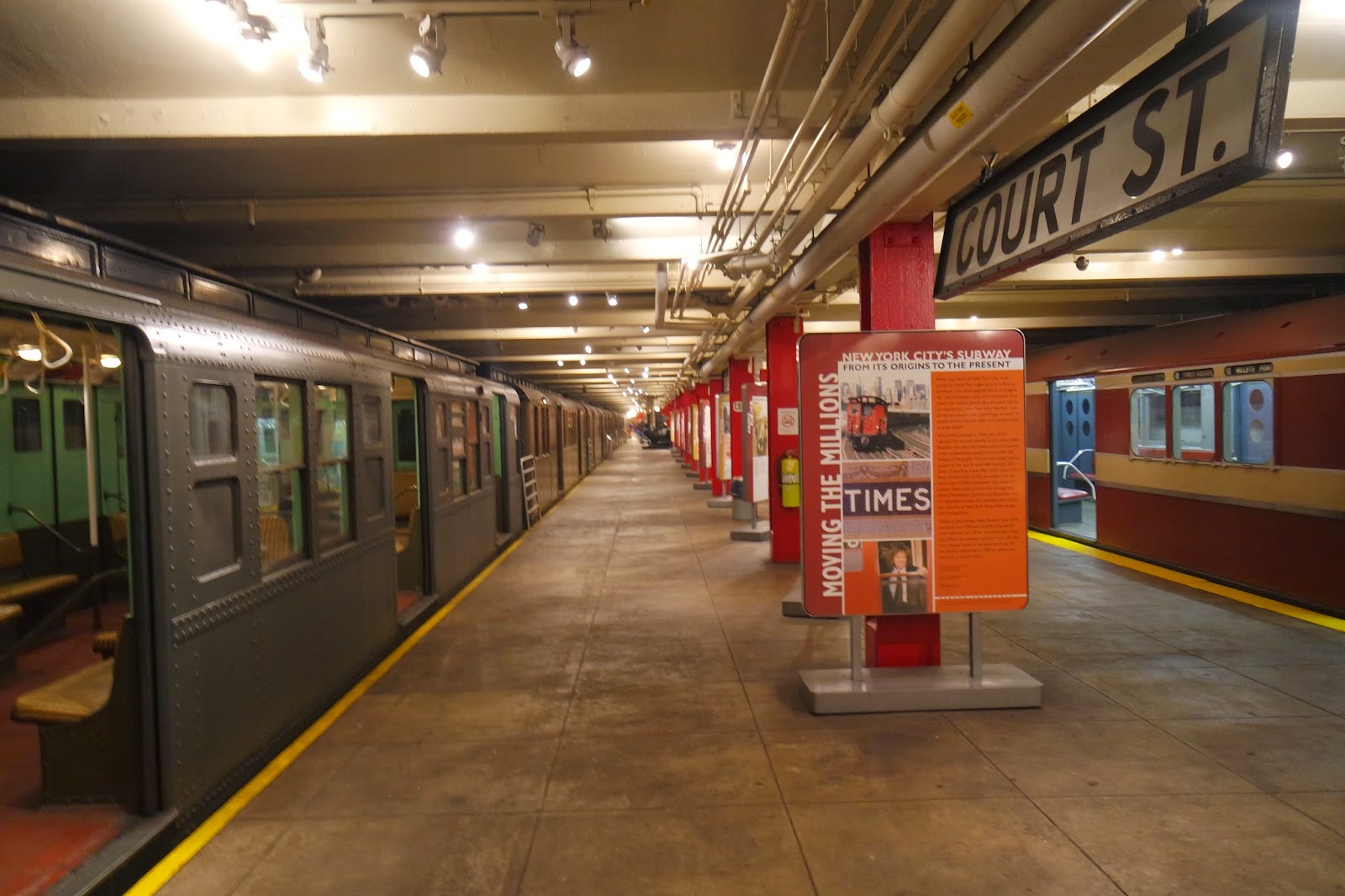 Court Street station was once a shuttle stop at the end of the line, like Aldwych, and the MTA have left the electrics in place and used the old platform area as storage for their historic trains.  The length of the platform is filled with every type of train that once ran over the New York lines, and you're allowed to wander all over them.  They range from the charmingly ancient looking: 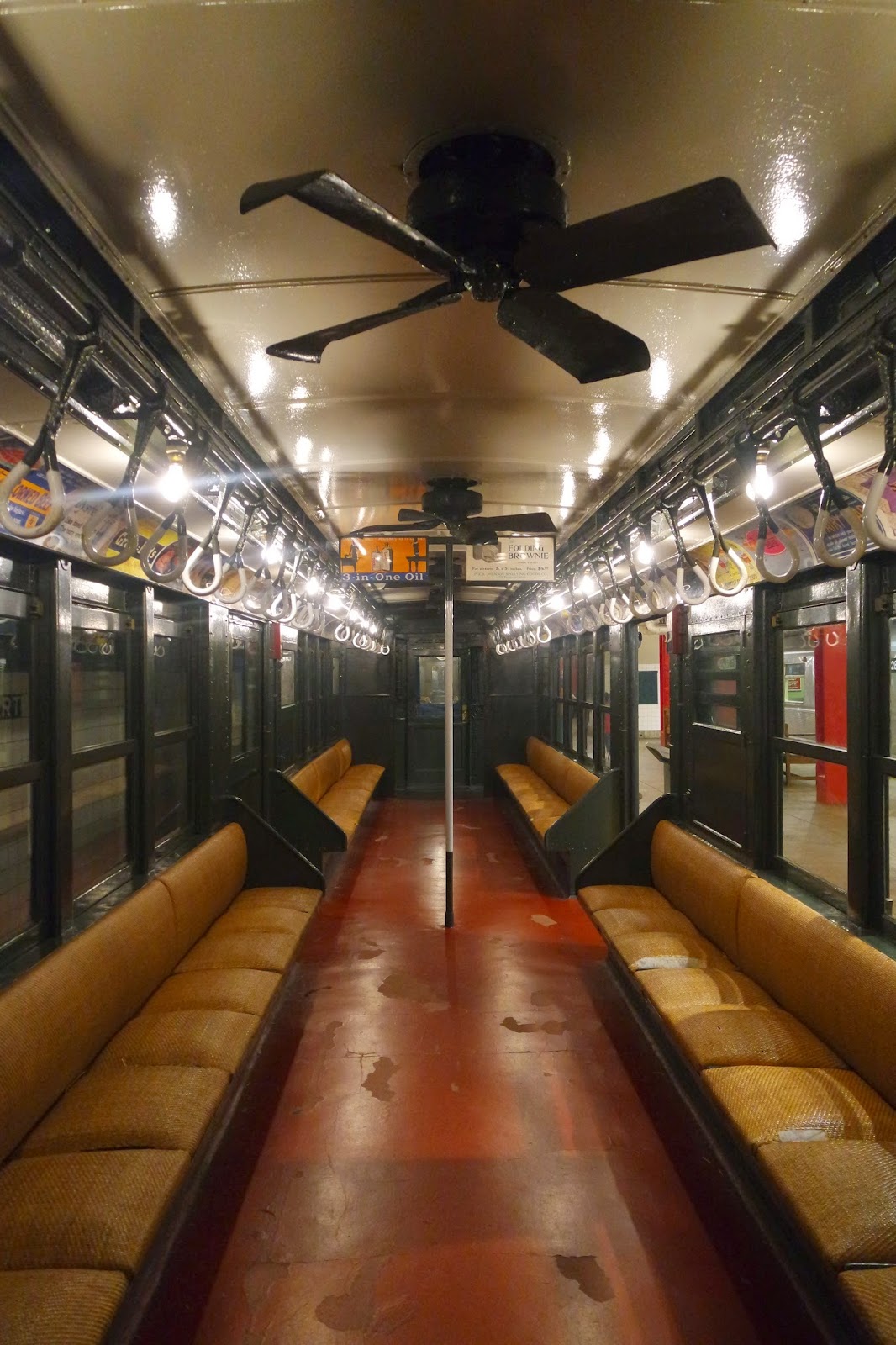 ... to striking attempts at modernism: 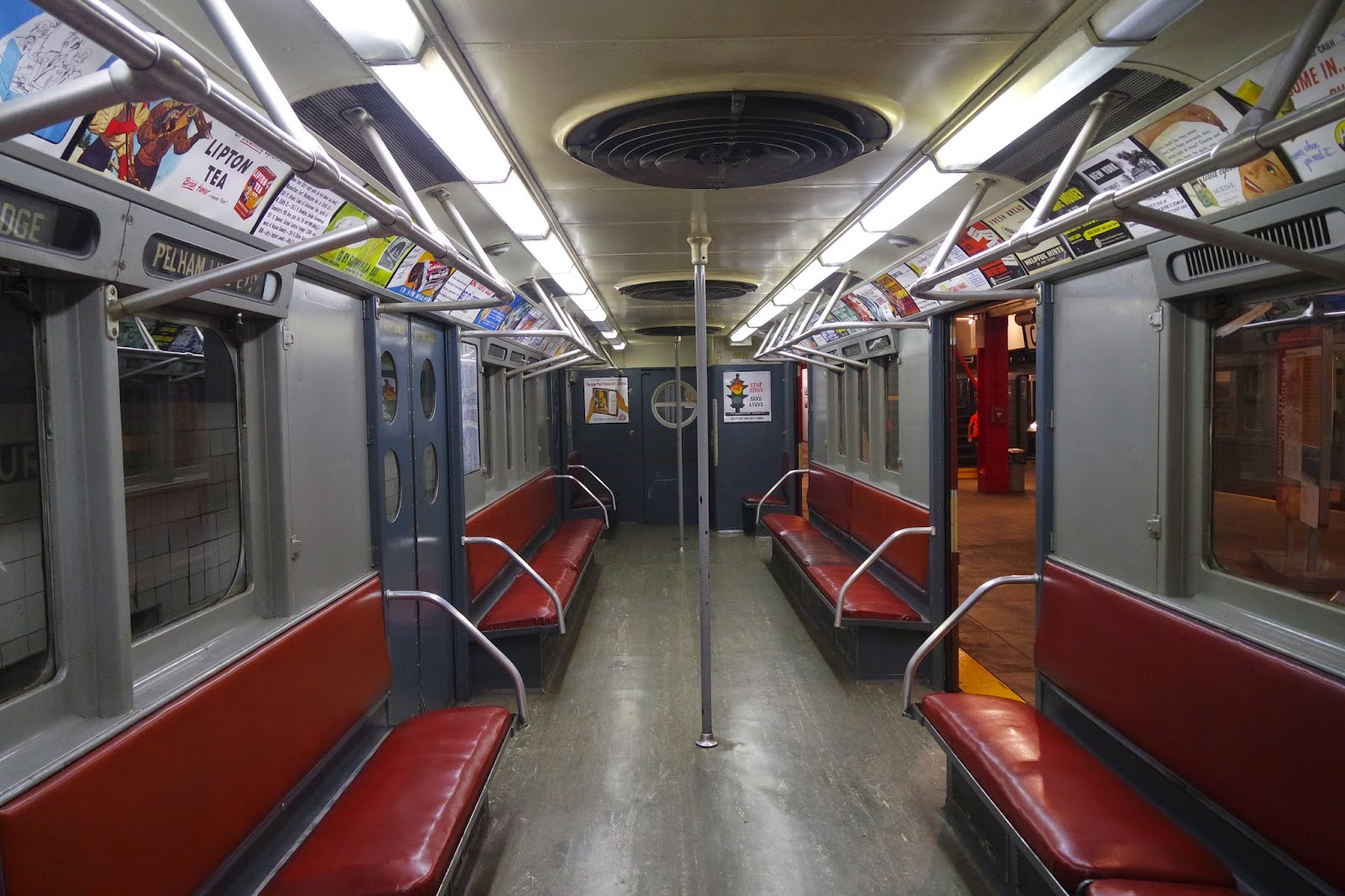 It was a shock to realise that the New York subway did once have cushioned seats.  I'd spent the last few days shifting uncomfortably on plastic and wondering why only Britain seemed to value the moquette.  I didn't know that the city had only recently abandoned comfort in favour of practicality. 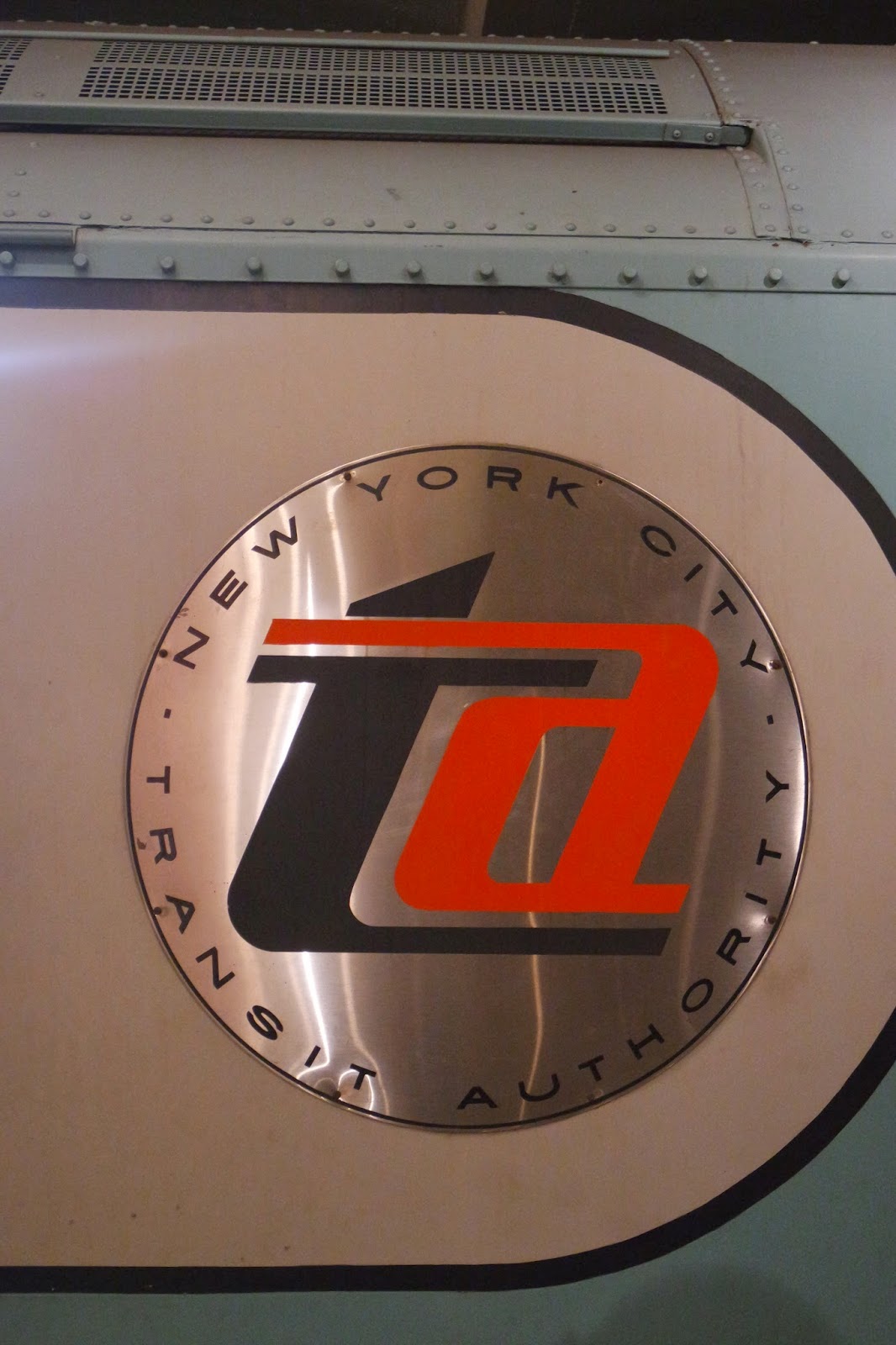 Each train has also been decked out with period advertisements, just to help you with that time travel feel.  These were just as fascinating as the trains.  I mean, look at these: 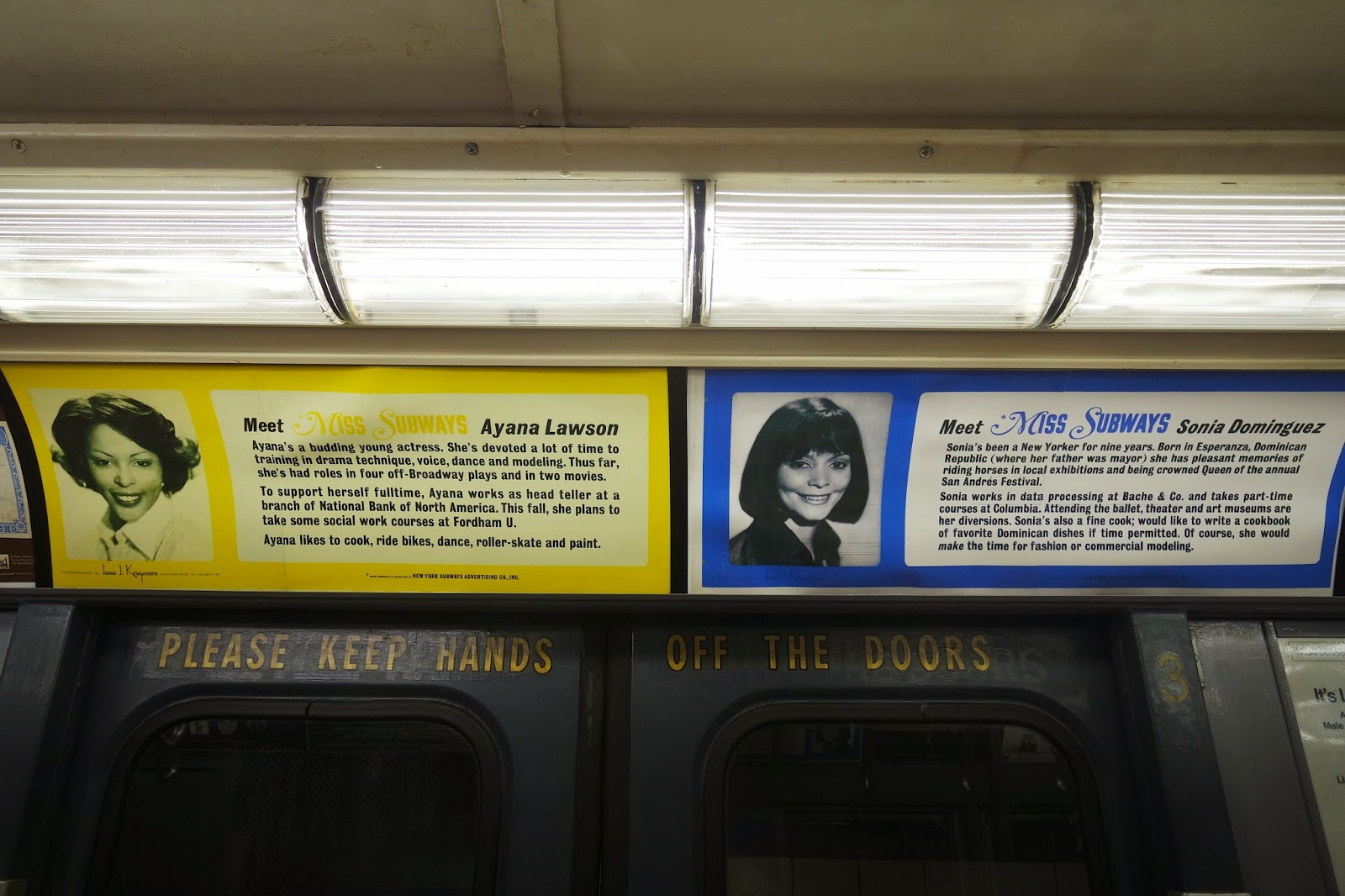 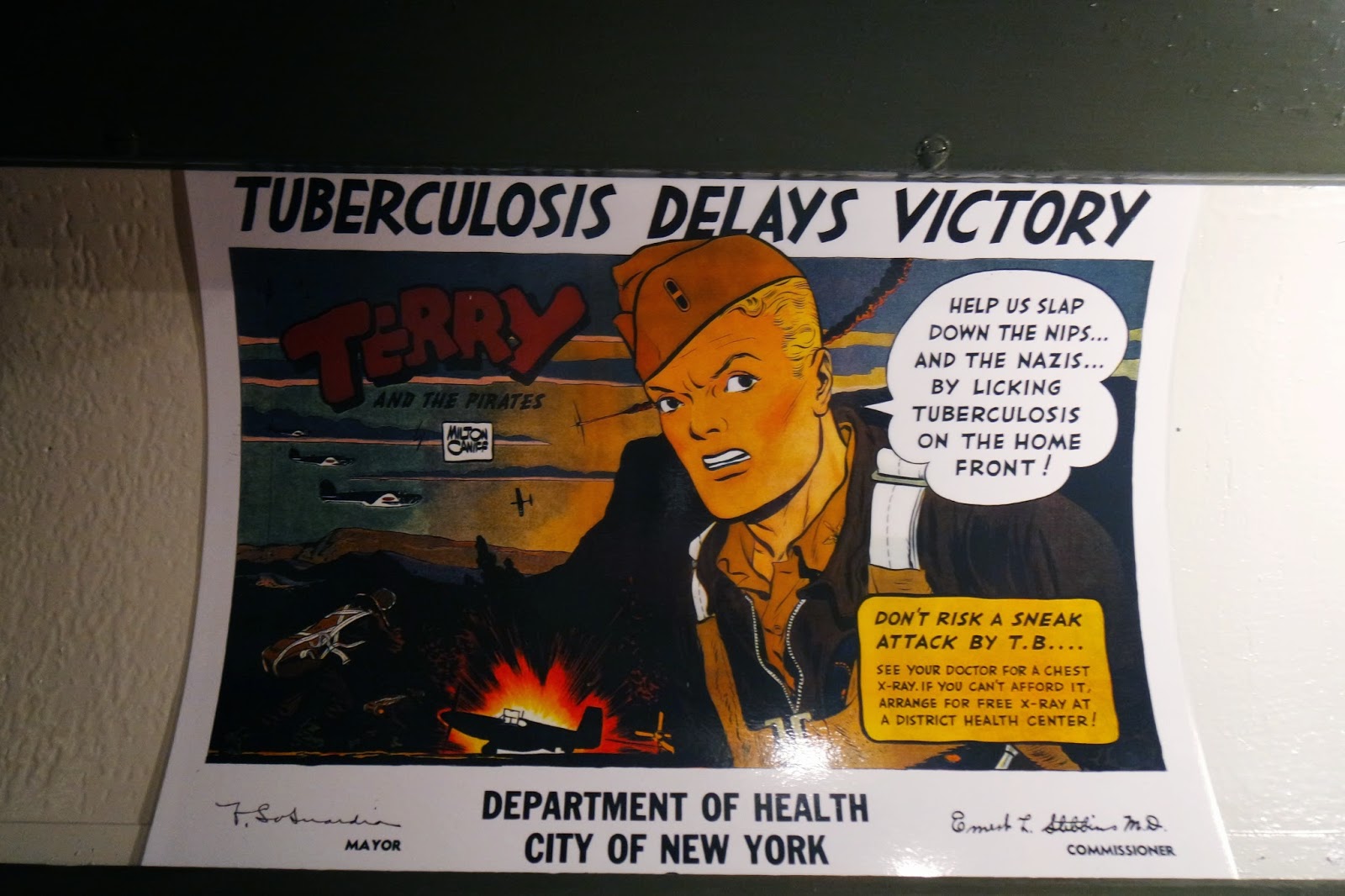 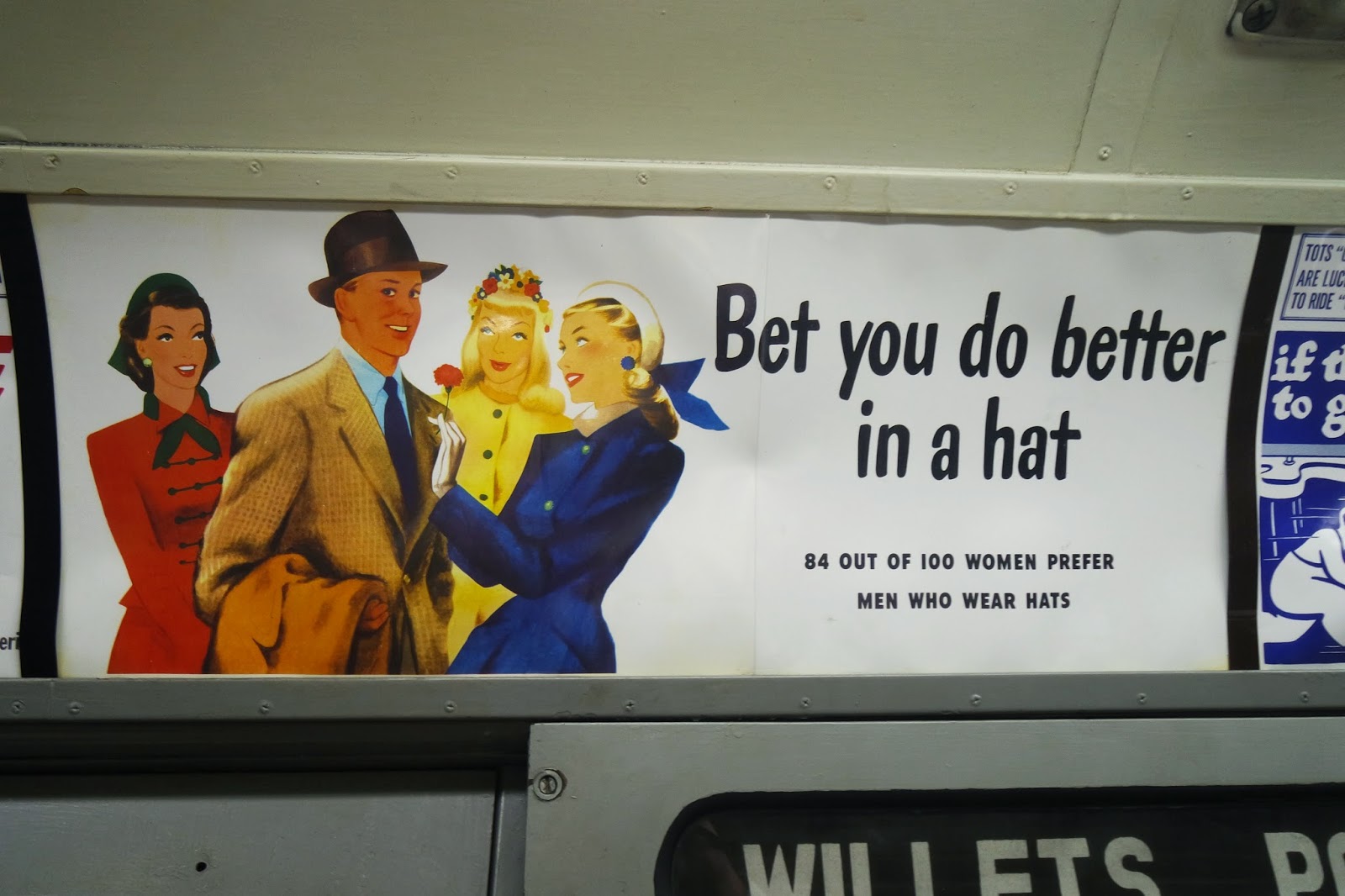 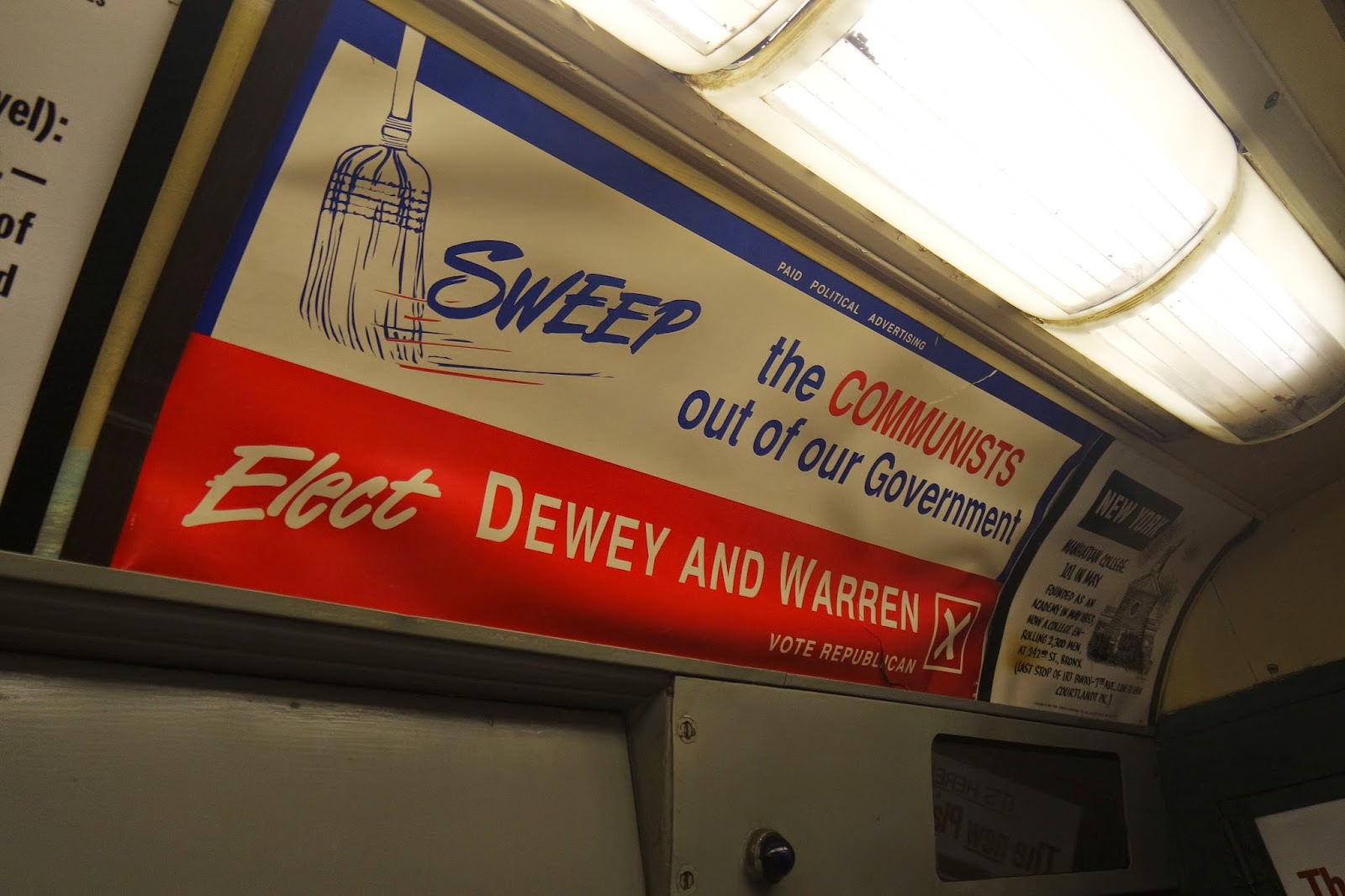 That hat one, in particular, is filthy.

The high point of the museum for me was a 1960s car, decked out in pastel blue for the World's Fair.  Its colours were very Doris Day and Rock Hudson, with that hint of optimism and confidence that Nixon would comprehensively torpedo in the mid Seventies. 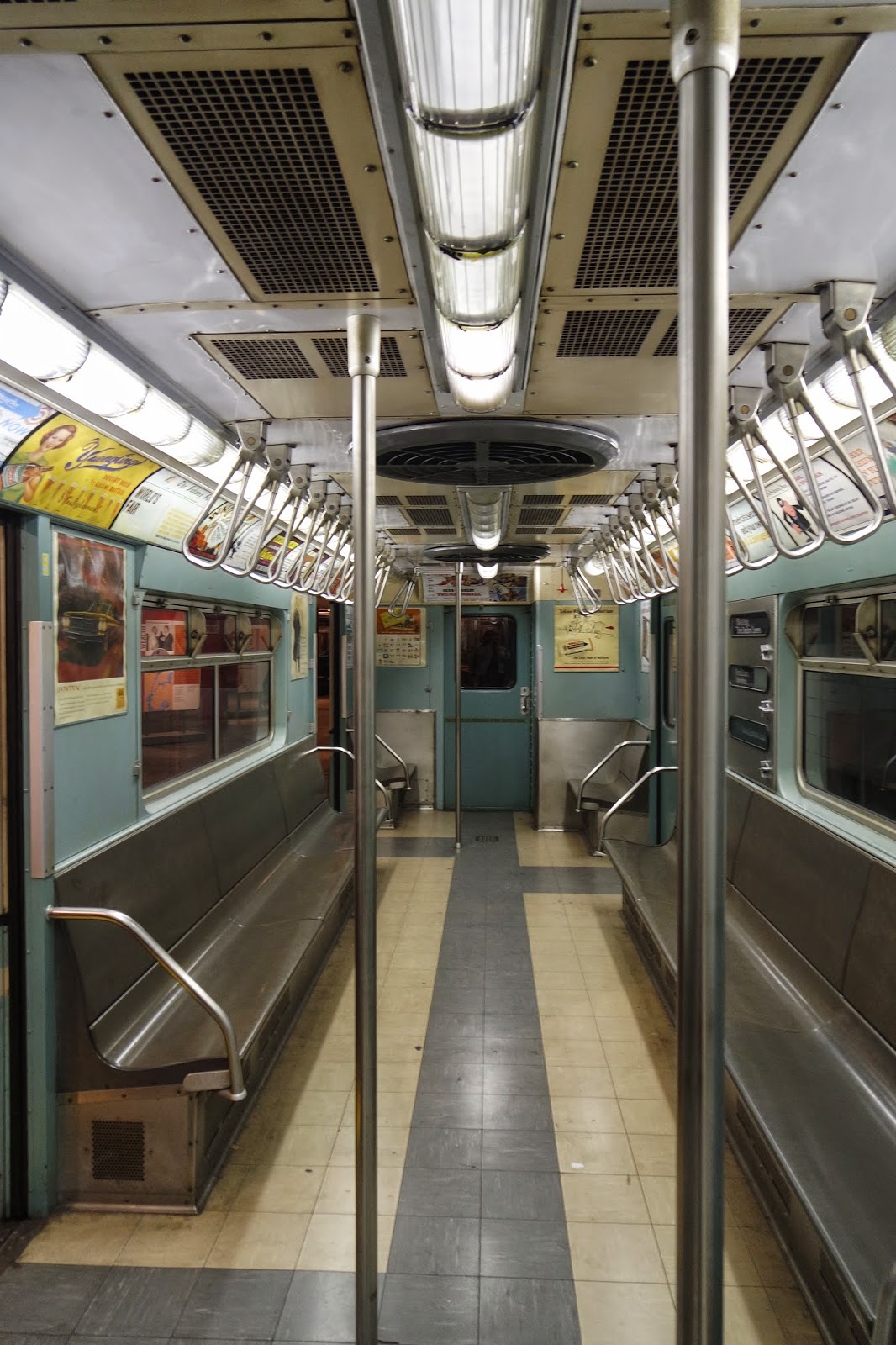 Oh, but who am I kidding?  The real reason I loved this train the best was this: 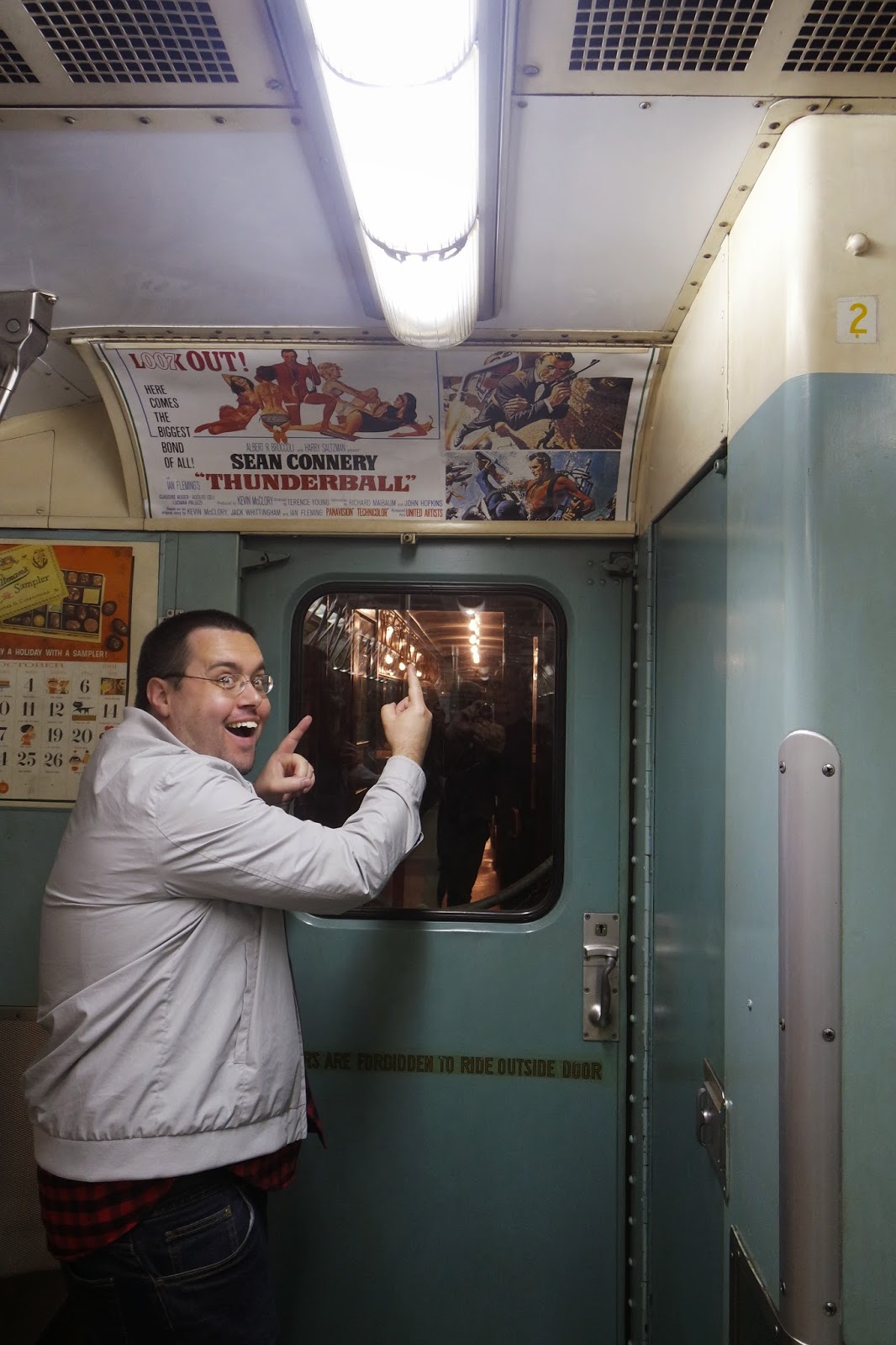 Stick a Bond poster in there and I'm anybody's. 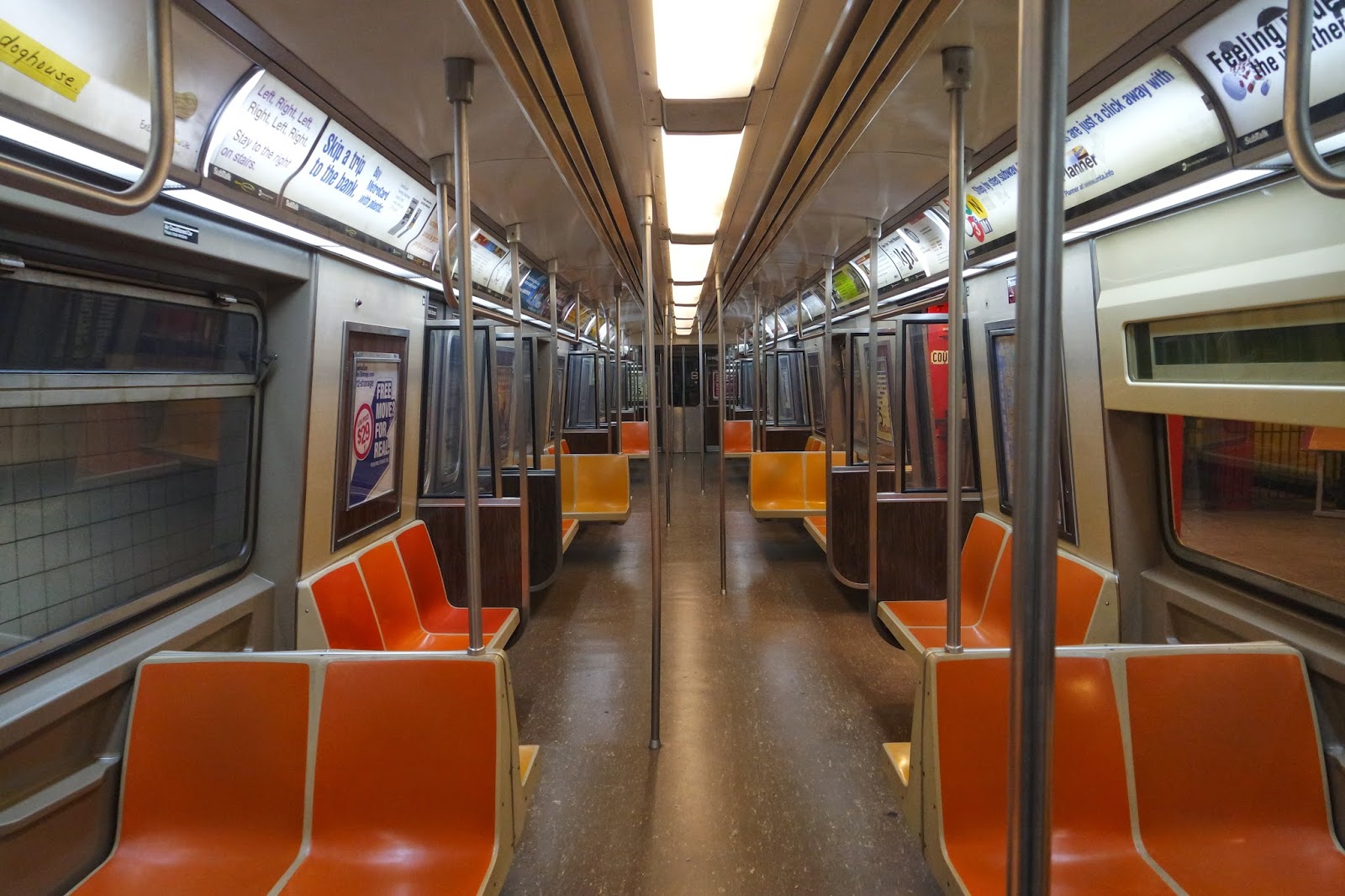 After that, I returned to the upstairs gallery, for a history of the turnstile and the subway token.  It couldn't quite compete. 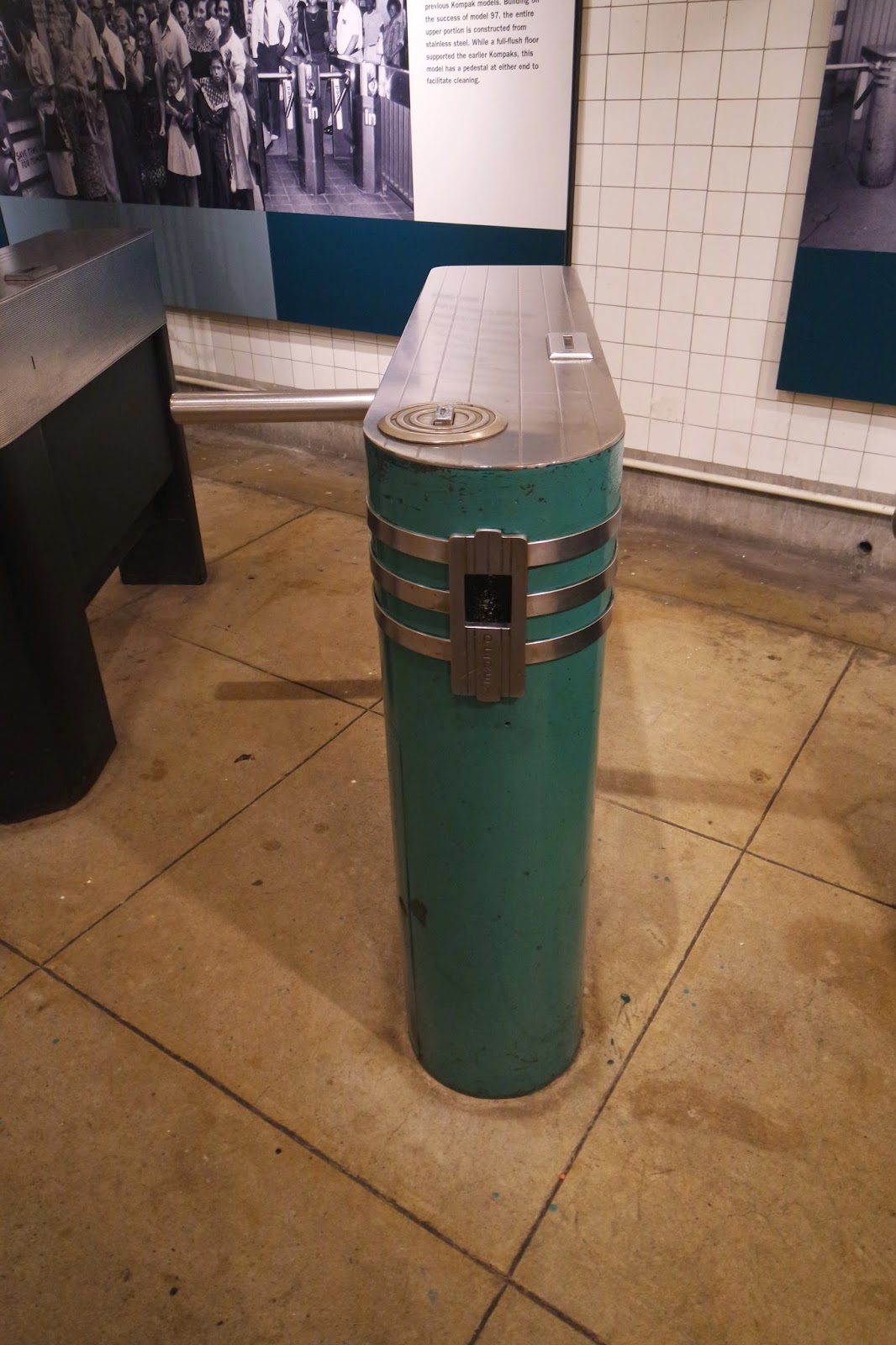 As with so much about the Subway, if they spent a bit more money on it, the New York City Transit Museum could be wonderful.  It needs to be bigger and more comprehensive.  It needs fewer kids banging about screaming in your ear.  It definitely needs to get rid of the stroppy cow in the gift shop who treats customers as an inconvenience even as you hand over your fifty dollars.  The train section is so good, it needs to be better know and more loved. 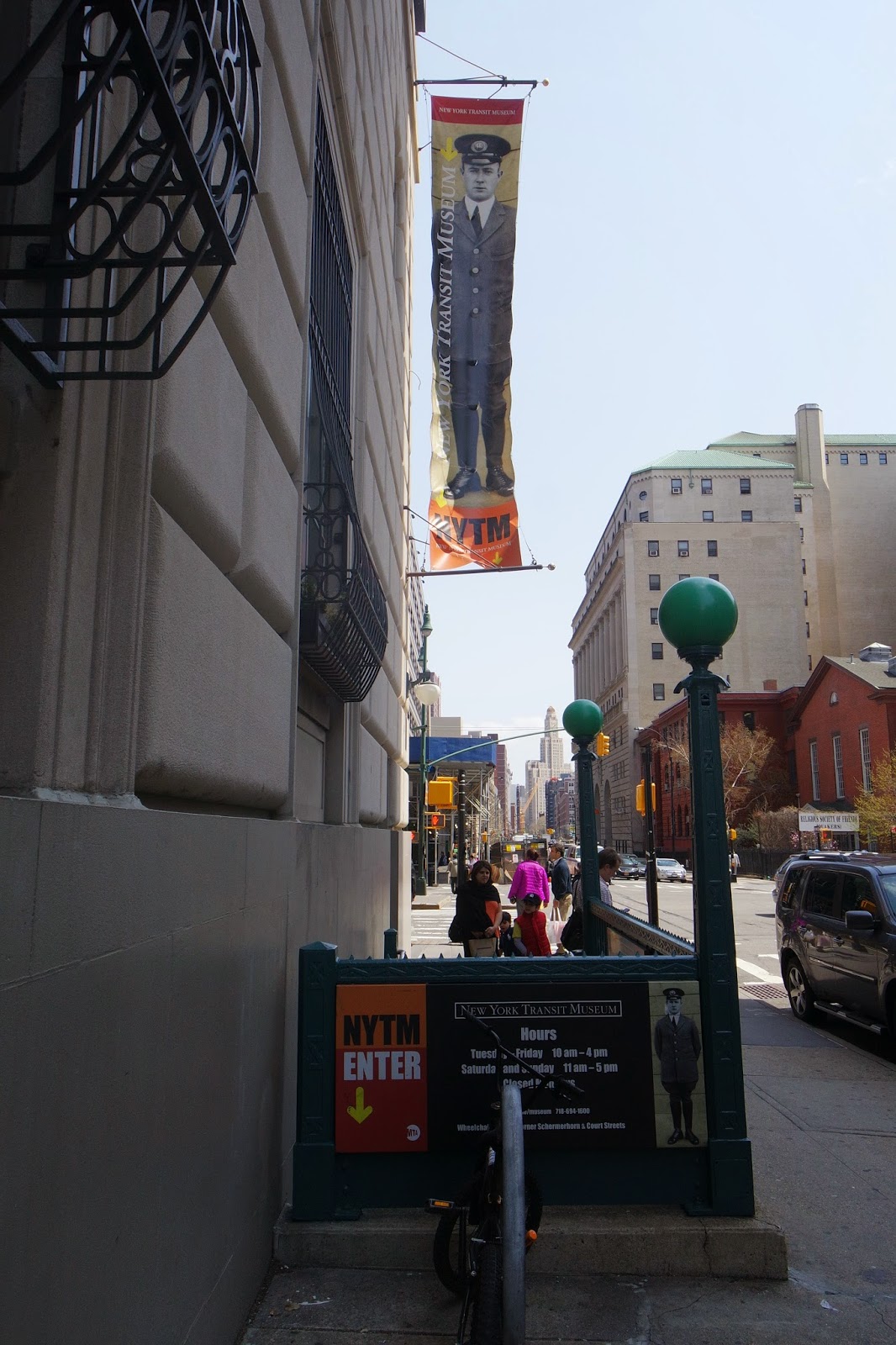 I know your pain. On my last visit to the Transit Museum a nursery school teacher marched up and down the platform and through the subway cars singing with the children at the top of their lungs. There was no escaping it. The museum has also expanded and improved their exhibits a lot since I first went in the early 90s.

As for the padded seats, vandalism in the 70s did them in. The MTA was broke and couldn't afford to keep replacing them. Besides, you can hose down plastic seats. I've seen seats painted in shit more than once.

Oh, and just a helpful tip: if you see an empty subway car during rush hour, don't go in. A smelly bum (when I say smelly, I mean he wreaks of a year's worth of shit, urine, and probably vomit)is in there.

Forgotten NY is a great website for New York's transport history, especially the subways and els.

For if you ever go back and assuming you didn't see it: if you stay on the 6 line southbound at the end of the line by brooklyn bridge city hall, the train turns around. While it does, you can see the old City Hall station, now unused but in perfect, well lit knick. It puts the rest of the new system to shame.

Though I will admit to being worried not getting off at the end of the line!