Some stations have a mystic aura around them amongst railway aficionados.  Tees-Side Airport, for example, is a little halt that serves the airport near Darlington.  It's also the least used station in Britain, the kind of record that makes people want to visit it.  It's on the Northern Rail map, so I'll have to go there someday, but with just one train in each direction on a Sunday morning, it's going to take a bit of planning.

Other stations with similar fame include Denton in Manchester, which I visited with Robert a couple of years ago and which only gets one train in one direction per week.  That train was rammed full of bespectacled gentlemen taking pictures of the rare service and the unloved station.  In fact Robert's turned his love of these obscure stations into an entire website.  Or Berney Arms, which is accessible only by train or foot.  Although I have to be honest: so many people have visited Berney Arms it no longer seems to be anything special.

I hadn't planned on it, but I was going to collect one of these fabled stations.  The train from Sleights to Middlesbrough got in at nine pm, so I had to stay an extra night in the city.  I looked at the map and wondered.

Redcar British Steel is a station that's inaccessible to the public.  It's completely surrounded by the steelworks, and so is in effect private land.  On top of that, it only gets two trains a day: one towards Saltburn in the morning, and one towards Bishop Auckland in the evening.  I could have got off the train in the morning and just waited on the platform until the evening train went in the opposite direction; I would have at least visited the station.

It would have been against the rules though.  The Rules of Tarting, which I made up and which I have doggedly stuck to throughout this entire journey.  I have to arrive or leave by train, and I have to actually exit the station.  Just hovering on the platform doesn't count.  If I did it that way, all I'd have to do was dangle my head out of the train every time we stopped and I'd get my picture.  That's not a visit; that's a box-ticking exercise.

Plus I was afraid that the security guards at the steelwork would spot me loitering and have me arrested.

So, back in June, I sent an e-mail to the offices of SSI UK, the current owners of the Teesside steelworks (despite the station name, British Steel hasn't existed since 1999).  I explained who I was, and what I was doing, and a link to the blog.  I said I'd be in Middlesbrough on the 28th August, and that my train would arrive at British Steel Redcar station at 08:04, and could they give me permission to leave the station via the steelworks.  After a bit of to-ing and fro-ing they came back with, yes, if I gave them a call on arrival they'd send someone to accompany me off the site.

Part of me was absolutely sure that it wouldn't happen.  I was positive that I'd get an e-mail crying off, or when I arrived at the station they wouldn't have any idea who I was.  I didn't tell anyone my plans prior to my visit because I was so sure it would fall through.  I boarded the train from Middlesbrough with a mix of anticipation and anxiety.

There was disappointment mixed in there as well, because I'd assumed that the service had clung on because it delivered hordes of burly steelworkers to the site.  I imagined a train filled with hard muscled working men, probably in overalls, definitely dripping with rugged masculinity.  I think I was confusing Redcar Steelworks with the mill from The Simpsons ("Hot stuff coming through!").  Instead the Pacer was half filled with office workers, people in neat suits, shop workers in Asda uniforms.  Not a blue collar amongst them. 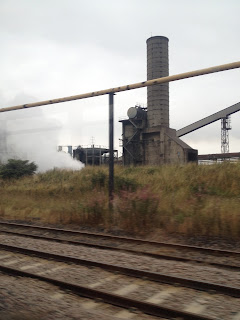 We passed through a Terry Gilliam landscape of scrub and chimneys.  There were patches of waste interspersed with the kind of brutally ugly factory you don't think still exists in 2013; it's the kind of place that you assumed Thatcher had closed and then torn down, possibly with her teeth.  There were cold grey skies adding to the general air of "Channel 4 drama about the unions c.1986".

The guard made her announcement: "We are now approaching British Steel Redcar."  Apparently no-one can decide what it's actually called; so long as those three words are in the name somewhere, it counts.  Given how few people use it she could have probably said "the Fields of Trenzalore" - it didn't make much difference.  Four of us got off at the station: I alighted behind a skinny twenty something with an iPod and a leather man bag slung over his shoulders.  If this were London he'd have been getting off the Tube to go to his marketing agency to come up with a new name for milk; instead he was stepping out into a post-apocalyptic wasteland. 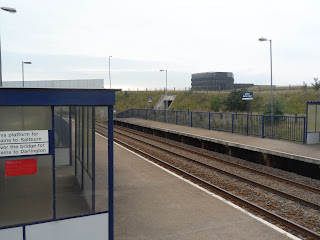 The surprise was how big it was.  After three days on the Esk Valley it was a shock to go somewhere with two platforms, with waiting rooms, with a footbridge.  I let my fellow passengers leave then began snapping a couple of shots, vaguely aware that I'd attracted the attention of a man stood on the opposite platform.  He was grinning at my photography.  He came over the bridge and introduced himself as Craig, from SSI's Communications Department, and the man who was going to ever so nicely escort me off the premises.

I shook his hand and asked him to do me one, tiny favour. 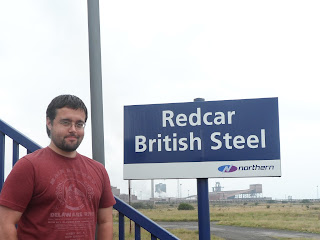 There you go folks.  Proof.  I had captured the Holy Grail.

Craig walked me across the bridge and out of the plant, a surprisingly long way.  The steelworks are vast, taking up a hefty portion of land along the coast and bounded by a dual carriageway.  We chatted on the way, with me once again having that embarrassing moment of explaining what I'm doing and how long I've been doing it for and hoping he never asks but why? because, really, there's no answer to that.

We stepped out of the plant and onto the dual carriageway.  "Right," said Craig and pointed down the road.  "Middlesbrough's that way, and Redcar's that way.  Good luck."  He vanished back inside the steelworks. 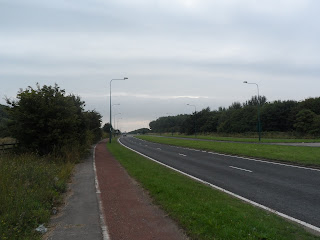 I began trekking towards Redcar with a ridiculous grin on my face.  Redcar British Steel, I was thinking.  Done.  I'd collected a station that I'd really thought I'd have no hope of ever visiting.  Frankly, the remaining two hundred odd stations would be nothing.  They'd be ridiculously easy to get.

Then I remembered Manchester United Football Ground station, and sighed. 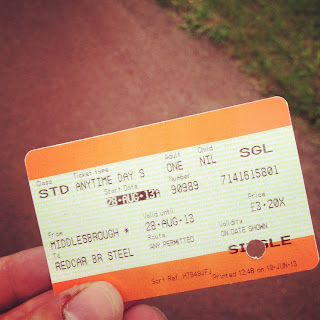 The thing with Manchester United Football Ground station isn't so much the footballers, it's the irregularity of the services to it, and the services it does get aren't well advertised. There is a home game this Saturday with kick off at 12:45. As far as National Rail Enquiries is willing to tell me, there are no trains running. Whether this changes later in the week, I don't know, but it's this uncertainty that makes it more of a pain than the "the only train it gets is at X o'clock". If it does run this weekend, it's on the Cheshire Day Ranger map, so I'll be out to get it. Then probably returning via Metrolink since I'm told you're not allowed to travel the other way until after the match is over.

This is assuming my moped's tire is replaced though...

Just be grateful you don't have to visit Lympstone Commando!

Back when it opened 30+ years ago it was called British Steel Redcar. Tidy minds have prevailed. And all the trains stopped there - as they did at Tees-side Airport...

I'd have thought that Lympstone Commando was relatively easy as the station has a public footpath/cycleway between it and the Royal Marines base. See http://www.geograph.org.uk/photo/1953685

Still, not an issue for MerseyTart as it's not Northern Rail.

It also has a much more regular service, so being stuck for half the day is also less likely.

Why do I have to go to Lympstone while commando? Oh, wait...

Let me know what sort of access there is at MUFC, "The Shillito". I'm slightly anxious that once you get off the train you're trapped in a "ticket holders only" area of the stadium and I'd be forced to watch a football match.

I think you have to go through ticket barriers to enter the stadium, but they could have ones actually on the station platform I suppose. Not sure. Either way, they can't really force you to watch the game if you refuse to buy a ticket. MUF is a National Rail station, so I'm planning on saying "it's just a convenient station" if anyone asks. This was also my plan when I visited Stanlow & Thornton, but Kevin the security guard didn't turn up.

Back to the original point, I'll let you know what it's like. Much like you did for Redcar, I'll hang around after everyone's gone to take a bunch of pictures (there are very few on the interwebs of the station).

There may be a path behind it, but apparently the gates are still locked at Lympstone Commando unless you're on official business.

You can, of course, alight there. Just not leave.

Many years since I visited Berney Arms but the beer used to be excellent!

Glad you made it here. Soon to be a relic I'd imagine.

Enjoyed your description of the journey. I used to work at British Steel Redcar roughly 20 years ago and often used to take the train to work. It meant an early rise since I was travelling from Durham and the only train to stop there on a morning did so at 07:50.

During the winter months I couldn't be bothered getting up so early so took a later train along the line from Darlington/M'bro and actually managed to persuade the drive, via the guard, to make an unscheduled stop at British Steel Redcar, circa 9am. He actually obliged saving me a taxi fare. I only had the audacity to pull this stunt once though.

The journey from Mbro to Redcar really is unique in terms of the industrial landscape. I can't think of anything to match it. I'm usually on the lookout for coastal journeys such as Carnforth to Whitehaven or countryside journeys such as Tyne Valley, Settle-Carlisle etc.

In terms of industrial landscapes, I recently did Doncaster to Cleethorpes where you go through (or past) some steelworks. It's not as good, in my opinion, as M'bro to Redcar. Also enjoyable, but slightly different is Huddersfield to Stalybridge passing all the old Victorian Mills, factories & canals. If that's your thing, I'd recommend Saltaire if you've not been there: Salt's Mill is great and the whole town is a UNESCO World Heritage site.