I am frequently in the right place at the wrong time.  I'll turn up in pubs to be told that some D-list celebrity has just left (often someone from Hollyoaks).  I'll arrive at events once the fireworks have gone off and everyone's calling their taxis.  I'll leave nudist beaches just before the arrival of an entire rugby team.  My timing is just rubbish.

Yesterday I was definitely in the right place.  For reasons far too dull to go into here I was in London for 24 hours, and while scooting about looking for stuff to do, I discovered that the new square outside King's Cross station was opening Thursday morning.  I was tremendously excited.

For those readers who live outside London, or who don't give a monkey's about major UK rail termini, King's Cross Station has long been a pustule on the capital's rail network.  Designed by Lewis Cubitt for the Great Northern Railway and opened in 1852, it's been terrible almost since it was opened; the station was constructed on top of a smallpox hospital, which probably should have given them a clue.  For a hundred and fifty years it's been pretty awful, surrounded by streets full of whores, druggies and muggers.  Things were so bad, the Pet Shop Boys wrote a song about it. 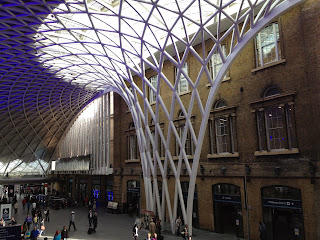 The first phase of the new look station was opened last year, a funnel web of steel supporting an arc-shaped roof.  The half-circle of the new concourse is bright and modern and elegant.  It's full of shops and restaurants - I had a serviceable bacon sandwich on the upper deck - as well as a place for Japanese tourists to pose with a luggage trolley and pretend they're in Harry Potter.  I can't help wondering if its new position as a place of pilgrimage for Muggles convinced Network Rail that they should maybe get on with tidying it up.

Anyway, it's joyous, a huge inspiring space that forms as interesting a 21st Century railway station as St Pancras International across the road.  In some ways I prefer it - St Pancras's position as the Eurostar terminal means it's filled with unfamiliar sights, words like "check in", unusual fonts, foreigners.  King's Cross feels like another National Rail station, albeit one on a rather larger scale.

The works at King's Cross stopped last year for the Olympics.  When that was all out of the way, the builders moved back in to work on the front of the station.  Since the 1970s there's been a tin-roofed shed out there, blocking the pavement and housing the saddest branch of WH Smith you'd ever have the misfortune to visit.  Cubitt's building was almost immediately covered up by shops - it's never really got the respect it deserved - but this green monstrosity was a final humiliation.  It was intended to be temporary and somehow lasted forty years.

It's all gone now. 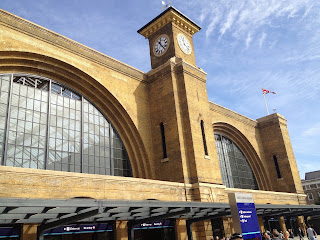 It's difficult to convey just what a relief it is to see the front of the station.  How it suddenly looks relaxed and less frantic, as though it's been cured of that niggling illness it's had for decades.  There are still a few scars - the brickwork looks a little pale round about where the old structure used to be - but now King's Cross has been opened up and allowed to breathe. 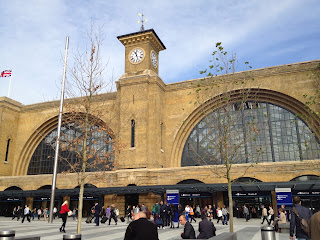 (I will however make one exception to this rule, and that is the man I saw outside Madrid's main cathedral who was posing as a living statue of Jesus.  Beard, crown of thorns, stigmata, the works.  The levels of tastelessness were off the scale, so obviously I emptied my wallet into his hat). 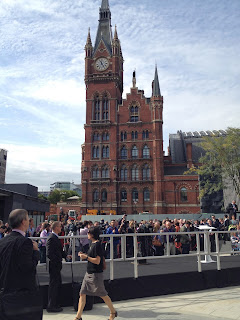 I had actually, for once, arrived at what Hugo Drax would call a "propitious moment".  There was a stage set out, and photographers, and then a load of men in suits with King's Cross lanyards round their neck appeared, and I realised something interesting was going to happen.  The odds on it being that interesting slipped a little when I recognised Frank Dobson, but I positioned myself behind the stage to get a good view.  It seemed I was there just in time to see King's Cross Square being officially opened.

The Secretary of State for Transport took the stage, and said a few words.  Then the head of Network Rail, who said a few more, including how great HS2 was and how we should really get on with building it, thanks.  And then - oh dear - then Boris arrived. 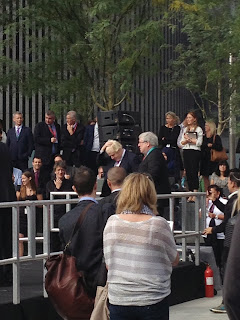 The tousle-haired loon took to the stage and immediately got my back up by saying that "they" would consider building two railway termini next to one another insane, but the FREE MARKET ECONOMY realised it was a genius idea.  No, I thought; a genius idea would be one large station so you don't have to cross a road if you want to change trains, and where you wouldn't have to replicate all the facilities in two separate buildings, but I understand he had a point to make.  He then waffled on about St Pancras "looking down" on King's Cross, with reference to classical literature, and then he remembered why he was there and started talking about the new square.  Well, that and the fact that the windows in the front of the station looked like a pair of binoculars.  It was a speech that made me look quite harshly upon London's voters.  Really? I thought.  THIS is the man you feel was best to run one of the greatest cities on the planet?  This melted snowman of a humanoid? 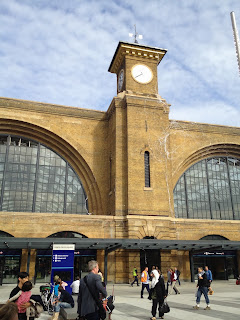 Finally - after talking about Crossrail 2 and HS2 with a slightly disturbing certainty, like he knew they would be built because he'd threatened the right people - Boris began the countdown from ten, and a load of streamers exploded from the balconies in front of the windows.  There was some applause and then all the famous people wandered off.  Almost immediately two men in hi-vis jackets appeared on the balconies to gather up the streamers before they messed up the square. 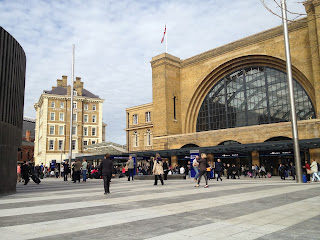 It is a wonderful place.  It allows you to appreciate the breadth and beauty of the building, much like the opening up of the front of Lime Street station did the same in Liverpool.  People were already using it like it had always been there.  They barreled out of the front of the station and straight across to the bus stops without ever stopping and thinking - "hang on - didn't there used to be a load of construction workers here?"  The seats were already being used by commuters with coffee and books.  An Oxfam chugger was loitering on the periphery.  The square had been folded into London life without any bother. 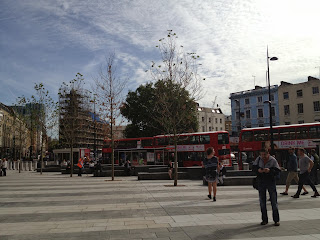 I will admit that a little part of me was sad to see this quarter of London made glossy and clean.  You could always rely on King's Cross to be filthy and rude.  And admittedly, part of the reason for the square is to stop this kind of behaviour - you'd have to be a very brazen kind of tart to stand in the middle of 75,000 square feet of open space advertising your wares.  It's also part of the plan to make King's Cross into a new district full of bankers and students and "young professionals".  I used to come through this area quite regularly, back when I was at Sixth Form and I'd come up to London to see a film or visit the bookshops, and there was a thrill of walking down these frenetic, scary streets.  There were "cinema clubs" and private stores with blacked up windows and "video shops" that were advertising Electric Blue even though it was 1993. 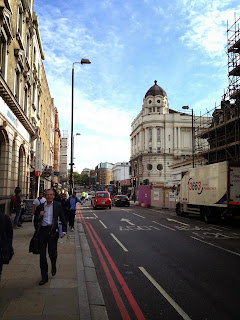 Retracing my steps towards the old King's Cross Thameslink station (now used as an Underground ticket office) I passed a Starbucks, a Samsonite shop, a juice bar.  Media types have colonised King's Cross - the Guardian is now based here, for goodness' sake.  It's become the new fashionable place to be and a part of me finds that sad.  I love the station, I love the square, I love how it doesn't look like an abattoir with trains in it anymore, but it's definitely lost some of the character.  It's become a bit... AnyLondon. 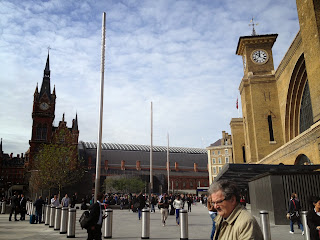 Rest assured, many of us who live in London can't stand and didn't vote for the hairy muppet either. He came to open our office last year. I hid in a corner on a floor he wasn't going to visit.

Kings Cross station though is a thing of beauty now. I especially love being able to look in and see the trains....

I'm reading your entire blog again from the beginning because I realised I missed out half of the pieces at the time they were written.

Also because it's almost like going to the stations myself when we aren't allowed to.

I have resisted commenting every time you talk about viruses and the like so far, but this particular article is hilarious and oddly prophetic in light of the events of the past 7 years...