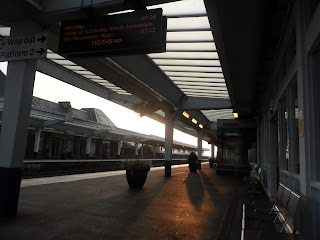 I was running this whole Esk Valley trip on a very tight budget.  It was the BF's birthday in June and when I asked him what he wanted he replied, "Oh, nothing really."  Gee thanks, that's really helpful.  One year I'll just hand over an empty box and see how he likes it.

The lack of inspiration meant I bought too much.  I simply wandered from shop to shop snapping up things that I thought he might possibly, maybe, like.  Stuff with the Liverpool FC crest on it, random CDs, films that he'd said he liked when he was a kid and wouldn't mind seeing again (that'll be the Peter Cushing Doctor Who Blu-rays, then).  I overspent wildly, and I'm still paying it off now.

I was therefore less than happy when the lady in the ticket office at Middlesbrough informed me I couldn't have the £14 Moorslink rover ticket.  "We don't sell them here, love."

"Oh," I said.  I was pretty sure the website had said any staffed station.  "Can I buy it on the train?"

"No, afraid not.  You have to go to Grosmont I think."

This is actually all bollocks.  I should have been able to buy it at Middlesbrough station, and I should have been able to buy it on the train.  Here's the National Rail website explaining that.  Problem is, I didn't have that site to hand, and I'm no good at confrontations.  I ended up buying a £20 Tyne and Tees Rover ticket instead, waving goodbye to six pounds worth of lunch and/or beer in the process.  (Which reminds me: I must send an e-mail to First Transpennine's customer services). 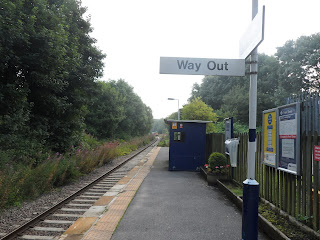 Still, focus on the positive: I had a rover ticket in my hand, one that meant I could lark about on the railway all day and collect a number of stations.  My first stop was at Kildale, a tiny station inside the National Park.  As there's only one track for the majority of the Esk Valley Line, most of the stations are little more than a single platform, but they're all well cared for.  There were hanging baskets and neatly trimmed foliage. 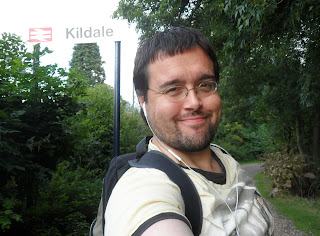 Instead of immediately setting off for my next station, I made a slight diversion.  There's a footbridge over the end of the platform, a tiny wooden thing with gates at each end. 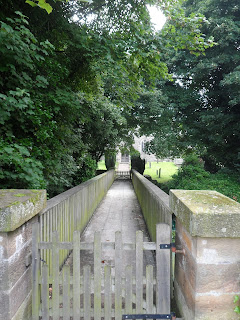 It leads to St Cuthbert's, a pretty village church that was isolated from the village by the railway.  You have to admire the arrogance of the railway engineers, slicing a house of worship off from its parishioners.  "Oh alright then - we'll build you a bloody bridge". 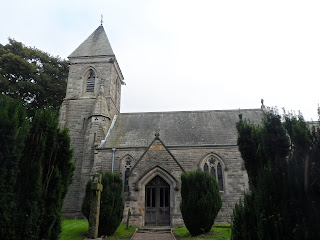 I was actually visiting the church for a far less spiritual form of worship.  The excellent Esk Valley Railway website told me that there was a steam train themed window in St Cuthbert's, and I wanted to have a look.  Unfortunately, stained glass isn't really designed to be seen from the outside.  I had a good stare at the windows but the shapes seemed indistinct, amorphous blobs that could have been anything.  Was that Our Lord Jesus, or was it just a random circle?  Was that a train or the face of the Virgin?  There was no way of telling and obviously the church was locked up, so I snapped a photo of the gargoyles and went on my way. 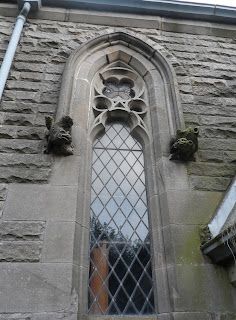 This was the part of the trip I was looking forward to least.  To get to Commondale, the next station, I had to trek over the moors.  It was all on roads, no footpaths, and the Ordnance Survey map seemed to have an awful lot of contours on it.  I walked out of Kildale village under a milky sun.  It was white through the clouds, already looking fierce.  The Bank Holiday looked like it was going to be a good one. 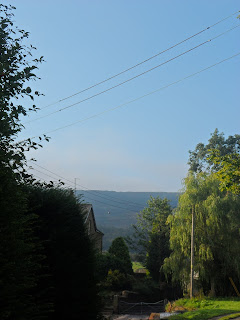 At first there were trees, cooling and dark, but they gradually thinned out to reveal fields of grass and moss.  Low stone walls hemmed in sheep, most of them bare, shorn for the summer.  Behind them was a rough harsh landscape of hills and scrub. 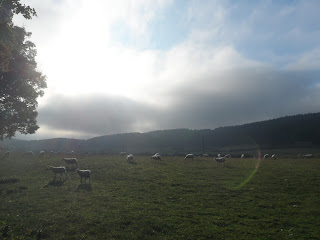 There's a danger to the North Eastern landscapes, a wildness you don't get in other parts of the north.  The Lake District and the Pennines are relatively tame.  Man has managed to calm nature's excesses there, driven motorways through it, built factories and mills and cities on top of it.  The North York Moors are torn and bloodied by mining.  They haven't been controlled, just hacked at.  Humans did their best to make their mark but they always gave up.  It's flinty and magnificent.

I crossed back over the railway line and the road began to rise.  A little buggy passed me, like an all terrain golf cart, with a farmer and his dog sat in the front two seats.  They pulled up at a gate and the sheep wandered over, ready for their morning feed.  The dog stayed in the front, resting his head on the dashboard.  Then the buggy passed me again in the opposite direction, off to a different field and a different set of sheep, to do the same again. 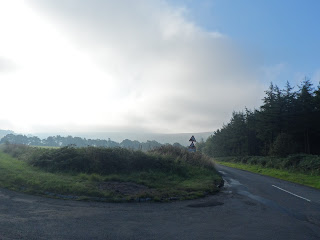 My arms goosebumped a little as I walked on.  There was a soft mist clinging to the moor, just a little morning glory, diamonding the grass with dew.  It was getting steep now.  I was still on tarmac, unyielding, and my lungs began to pump harder.  I felt my face turn red as I walked upwards.  To keep rhythm and motivate myself, I sang, loudly because there was no-one to hear me.  I understand the preferred tune for most hikers is The Happy Wanderer; I went with You Know My Name, the theme to Casino Royale, and a particularly bellowy rendition of Skyfall ("Let the sky FAAAAAAAAAAAALLLL!  When it crum-BAAAAAAALLLLS!").  I'm nothing if not consistent. 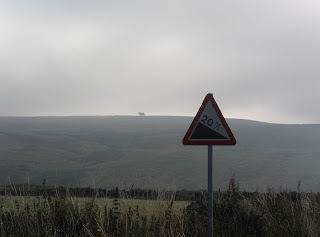 I picked my way across a cattle grid, balancing on the metals rather than taking the pedestrian gate, just showing off my primate dexterity to the flocks.  There was a sign on the fence: Extreme Fire Risk! No smoking, barbeques or stoves - a reminder of just how dry this summer has been. 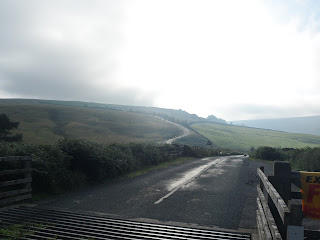 The sheep wandered all over the road now.  I'm used to them being terrified of me, but these ones were almost stoical.  They moved out of my path, of course, but only to the edge of the road.  They knew that this territory was theirs.  Far more scared were the rabbits, bouncing out of the undergrowth and scrambling through holes in the stone walls.  They had better cause to be frightened though, judging by the frequent corpses I saw squished into the road. 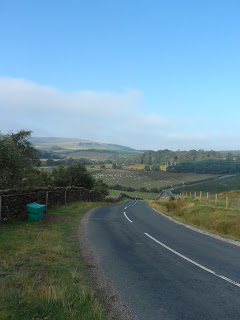 At the top of the hill I paused to catch my breath, leaning on my thighs.  The moor stretched higher above me, unfriendly, thin with gorse and stubbly grass.  Sole trees formed incongruous landmarks on the horizon. 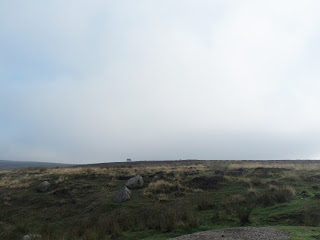 It was all very Wuthering Heights; I considered changing my vocal repertoire to include the Kate Bush classic but I'm really not keen on Heathcliff.  I know he's meant to be this complicated romantic hero but I just think he's a git.  I much prefer the sensitive, quiet types to the brooding oafs who go round thuggishly whacking people.  Instead I broke into In My Own Way from Shock Treatment.  The sheep seemed to approve.  I'm sure they were running to get some food or something, not fleeing my impassioned singing. 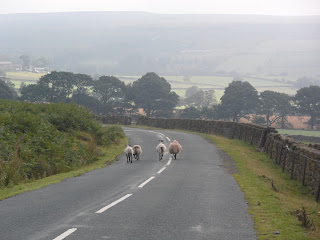 The road sloped downwards now, through pink heather, and soon I was entering Commondale.  I'd made it in ridiculously good time.  There was a four hour gap between the first Whitby bound train and the next one, and I'd done the walk between Kildale and Commondale in a couple of hours.  I was pleased with myself but also annoyed: what the hell was I going to do with myself at the station for two hours? 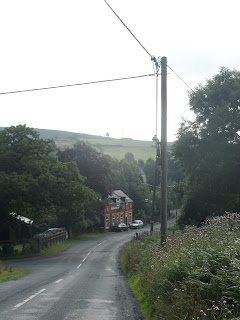 The village was just waking up.  Cockerels with no sense that it was a public holiday were making their presence known; the occasional dog was joining in.  A man in a vest and shorts watered his hanging baskets while it was still cool.  As I passed the pub, a young mother with a tired child in a pushchair went by.  She smiled a greeting to me as she went past. 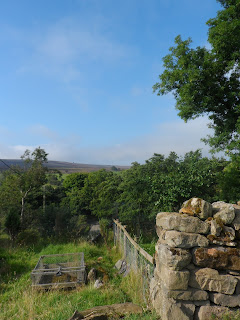 I left the village for the station, behind a weary tractor.  The road narrowed from a lane, to a track, then a path; as the tractor vanished off into the field I stood confused.  Where the hell was the station?  A sign didn't help - it had clearly been interfered with, because it was pointing down the side of a farmhouse into a field. 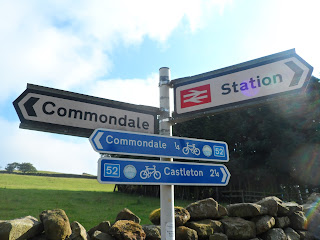 Then I noticed the sign on the gate - Access to the station ONLY.  Still a little disbelieving, I passed through the gate and what seemed to be someone's yard and into a sheep field.  Only then did I spot the elusive station sign, half hidden among the trees. 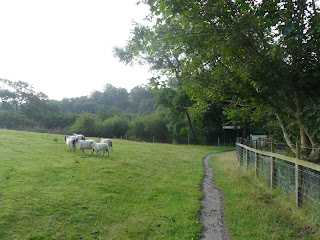 Congratulations, Commondale: you win the prize for "most rural station, ever".  I followed the path down to the tiny platform, grinning all the time.  I loved its obscurity and its quirkiness. 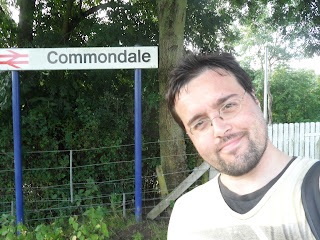 The halt itself was just as charming, a little brick shelter with a boarded up fireplace, wildflowers swaying beside the track, the sun penetrating the narrow cutting to warm me. 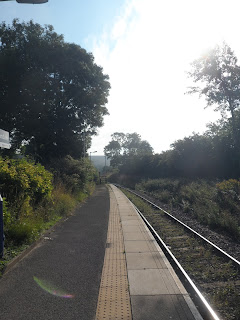 I sat on the platform and considered my next move.  Delightful though Commondale was, two hours just sitting here seemed like a massive waste of time.  It was far too early for the pub to open and even I'm not such an alcoholic that I'd start knocking back pints at 9 am.  I needed something to do.

I looked at the timetable.  There was a train going back towards Middlesbrough in ten minutes.  And that was how I ended up at Nunthorpe. 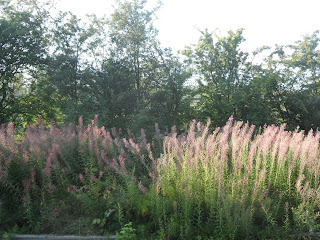 Kildale sounds a lot like Middlewood on the Buxton line. Middlewood is in the middle of a wood (well...park, but that doesn't sound as funny). I couldn't see a road for ages, so I just snapped my picture and got a train going in the opposite direction. I'm clearly not as adventurous as you...

As one that is cursed to pass through Middlesbrough station every day, I find the station staff there the rudest and least helpful in the North.

You could easily have walked to both Castleton and Danby in two hours!

And while (Pedant's Corner) you're of course right about the landscape's beauty, it's technically sandstone-y rather than flinty (I'll get me coat).

Fact-ette; Middlesbrough station used to have a splendid overall roof that was bombed in WW2. Maybe that's why the staff are grumpy?

It doesn't count unless I get a train to or from a station. I could have walked to another station from Commondale but I'd have still had to come back by train to collect it properly. Those are the rules.

Also, I didn't actually mean "flinty" in the sense of "made of flint" - I meant "sharp and grey and hard". "Sandstoney" isn't a real thing!

I have to agree that Middlesbrough woman was talking bollocks. Surely if I can purchase a Saveaway on an Arriva Trains Wales service from Birmingham International to Holyhead anything is possible?