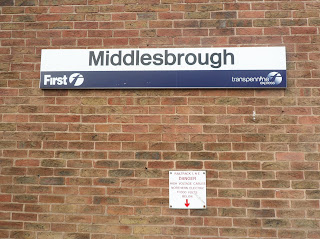 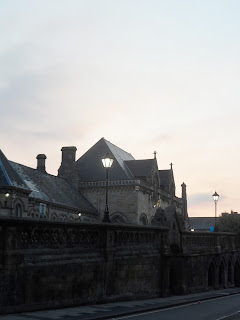 A smaller subset of stations went with the other big Victorian architectural fashion: Gothic.  Middlesbrough is definitely in this category.  It's a compound in the middle of the city, raised up above the streets with walls around it, like a vampire's castle. 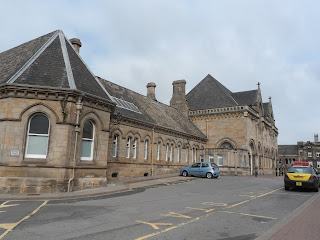 Its pointed roofs and windows beg to be on a moor, a single dog howling in the distance, a lady in a white dress peering anxiously through the glass with a candlestick in her hand. 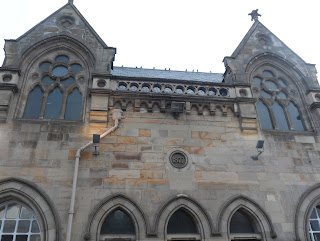 It was a bit disappointing to be there on a hot August day instead of in the middle of a grim rainstorm.  In the snow, it must look amazing. 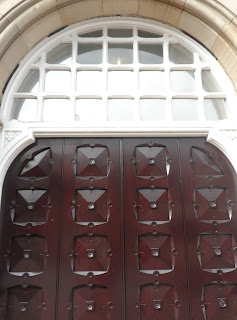 Inside it's just as good.  The station's been lovingly restored and now it's like stepping into a banqueting room.  Tall wooden beams high above a tiled floor; rich dark paneling making even the newsagents and ticket kiosks look thrilling. 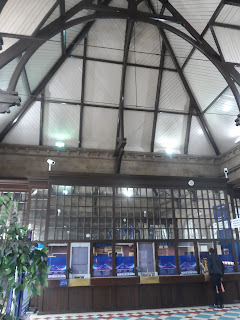 Only the presence of incongruous CCTV cameras and potted plants stop you from thinking you're in a baronial hall, about to tear the flesh off some recently killed animal with your teeth while wenches bring more mead. 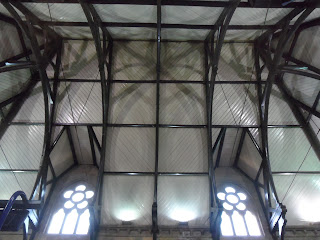 Below ground, the underpass has the vague air of a wine cellar, or perhaps a secret passage.  It's a shame that the 21st century intervened with the lift, spoiling the atmosphere somewhat. 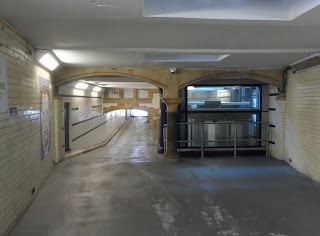 Adding to the modern intrusions is an art project.  Normally I'm pro-art in station spaces, turning unused parts of the building into canvasses, but here it seems to ruin the mood.  It doesn't help that it's partly been sponsored by a publishing house as a plug for a local author, Richard Milward. 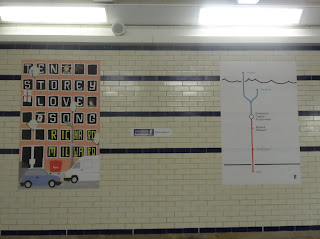 I actually bought the book on the right, Kimberley's Capital Punishment, admittedly mainly because of the line diagram on the front.  Unfortunately a very wet afternoon out with Ian left the book sodden and unreadable; I'd only got about three quarters of the way through.  It's a very strange book - I should really pick up a new copy, because I have absolutely no idea how it was going to end. 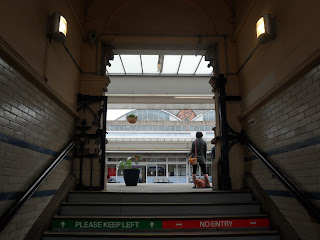 Sadly the tribute to Game of Thrones doesn't carry on throughout the whole station.  It was struck by a bomb in 1942 - a plaque pays tribute to the victims - which destroyed the arching roof over the platforms and parts of the building.  The roof had carried on the high Gothic feel - it was 75 feet wide, but 60 feet high, with elaborate end screens.

Replacing it on the ticket hall side is a low concrete concourse which manages to be elegant in its own way. 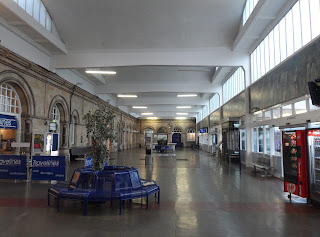 It's unfussy and doesn't try to compete with its over the top neighbour, which gives it its own charm.  Unfortunately its seats and roof and late opening hours meant that it seemed to be a sort of unofficial youth club; whenever I passed through the station in the evening there were half a dozen overexcited teenagers screaming at one another from the benches. 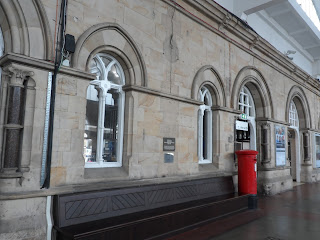 There are only two platforms in use at Middlesbrough these days, though if the Tees Valley Metro project ever gets off the ground, a third will be brought back into use.   Platform 2 does, however, feature one of those tiled North East Railway maps, and so it can do no wrong. 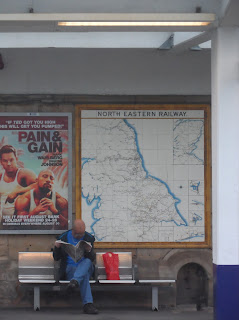 Did you know you can buy tile replicas of that map for your home?  I must start working on the BF to persuade him that we need to redecorate the bathroom.  Or the hall.  Or something. 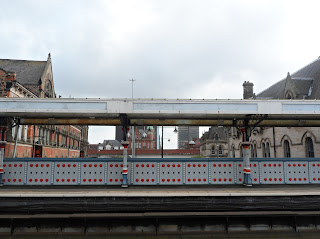 Basically Middlesbrough station is gorgeous.  It's a credit to the city and First Transpennine Express, who run it.  Middlesbrough itself, however...  Oh dear. 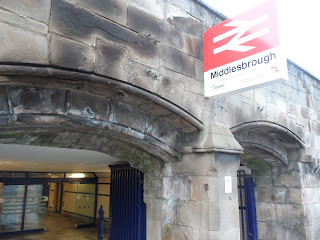 I should say that I never saw the city at its best.  I arrived on the Sunday of a Bank Holiday weekend, and my trains meant that I left at 7 am and returned at 9 pm.  So in the daylight hours it may be a thrusting, lively heartland, a veritable Rome on the Tees.

What I saw of it just seemed sad.  Like the town had been kicked in the groin and left there.  Middlesbrough's a town birthed by the railways: when the line opened in 1831 there were 40 residents.  By the turn of the century there were 100,000.  The trains brought goods and people to the new docks on the Tees, and industries sprung up to take advantage of the link. 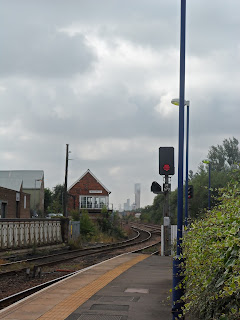 We're in a post-industrial society now, though, and Middlesbrough's given up.  As I wandered the streets I didn't sense any pride or joy.  The people I passed - the few people I passed - had their heads down, barrelling somewhere else, somewhere more important. 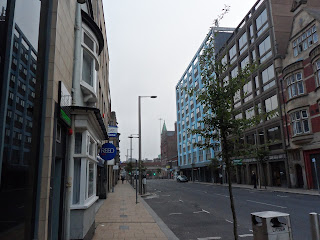 The Germans didn't help, hammering the city with bombs during the War, but the city fathers have to take some of the blame too.  The central shopping area is pedestrianised and empty, a few streets that connect up with big ugly malls.  The bus station is a concrete gyratory with more low rent shops inside.  A ring road slices past the railway station, chopping it off from the town with its overpass.  The dark space underneath has been filled with LED lighting to try and liven it up; the colours strobe sadly, like a single disco light left on after everyone's gone home. 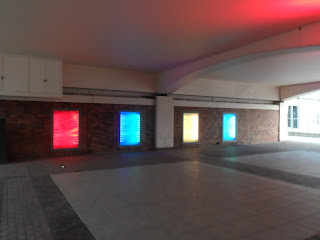 The shops and offices all seemed to have occupiers called Go Workforce! or Community FIRST that smacked of grants and hand outs and schemes.  There didn't seem to be many actual businesses at all, but then, those closed shopping centres largely hid them from my view. 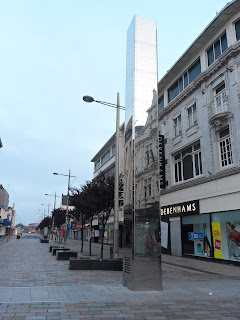 I was there for three nights, and at no point did I venture out of my hotel to explore.  I love grimy, down at heel cities - I'd much rather visit Barrow than Chester - but this one just made me sad.  When Liverpool was kicked in the nuts, bent double by crime and poverty and unemployment, it turned round and snapped.  It shouted back.  It said, We're better than this. This isn't who we are.  We're fucking Liverpool.  They punched back.

Middlesbrough feels like it was kicked and punched and went, "Fair enough.  We probably deserve it."  I wonder if it's because it's a fairly recent town.  1831 is only a few generations ago, five or six.  Perhaps that sense of loyalty and civic pride never really developed.  A bit like Milton Keynes, another town which is full of people who can't really tell you why they live there.  "It's alright," they say, because there's nothing there to love.

I went to the city's Central Square and I was hit by a succession of failed enterprises. 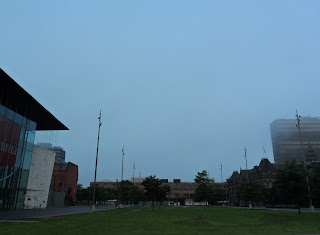 There was a Victorian Town Hall, a 1970s civic centre, a 1980s municipal annexe, and a 21st century art gallery.  All of them on top of one another with a bit of grass in between. 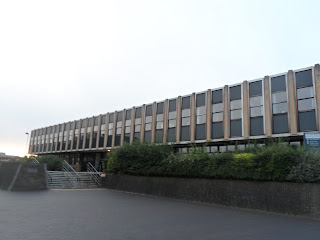 They were all so absolutely of their time it was painful.  I imagined the city announcing each new construction with a shouty press release about how it was cutting edge, modern, the future, and now they all looked like fashion disasters piled on top of one another.  Brutalism in one corner, pink mirrored glass in another, the post-modern brick of the 1990s court house.  Now there was the cultural centre, the newest attempt to be "with it". 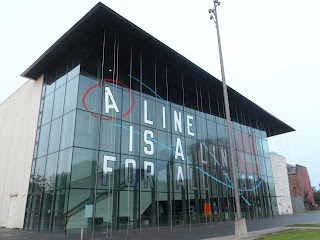 It's the Middlesbrough Institute of Modern Art, or mima.  You can't do that, I thought; you can't ride the coat tails of a far more famous and prestigious institution to try and get people through the doors.  It's like they'd called their museum the Kritish Museum or their university Boxford.  It's cheating.  And it looked uninspired and uninteresting: a cold Lottery project dumped in a city that wasn't really interested. A sign in the window said We're family friendly! which, in the middle of the school holidays, seemed a wee bit desperate.  It didn't help that its big piece of modern sculpture outside, titled Bottle of Notes, looked like a giant advert for Absolut vodka. 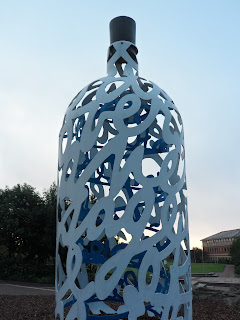 I really wanted to like Middlesbrough, I really did.  I wanted it to surprise and excite me.  I just wanted to get out of there by the end.  I was demoralised and miserable.  God knows what it must be like if you live there.

Also, I resent that missing "o".  What's wrong with Middlesborough, eh?  That makes much more sense.  Fix it, please.
Posted by Scott Willison at 08:37

Wonder if anyone does a version of that massive L&Y map at Manchester Victoria?

Link contains a picture of the station with its overall roof. Sigh.

Robert: isn't that painted on the tiles, though?

That second picture in the link, with the 1960s office block.

I have to say after reading your blog I agree with everything you say and it was interesting read the views and if I may say eloquent and critiquing views of someone who doesn't live in Middlesbrough. The town centre has been reduced to a shadow of its former self, past councils of the 70s and 80s seemingly brushing aside the old and replacing it with the crap they called the future, one such wanton vandalism was exchange place which was diagonally across from the station, the building which once stood there was built in 1868 and was on of the places were the world price for iron and steel was set. Surround this was other beautiful buildings which are still there but altered and hard to view with the monstrosity they call the A66 which ploughed through were the Royal Exchange building stood!! The Royal Exchange building was demolished to make way for this road which is really an eyesore, cutting the town in half and whom ever signed the contract for its building really should be stoned.......

These are some of the building middlesbrough has lost.