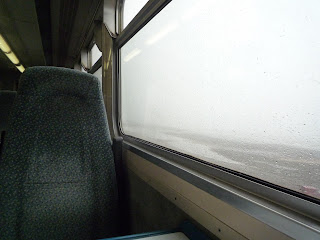 I have to admit; I was feeling a bit pleased with myself.  There are only four trains a day in each direction that  call at Braystones and Nethertown.  They were the immovable feast of the whole trip.  If I missed any other train, I could click and clunk and get the whole thing back on schedule somehow, but if I'd missed this particular train, I'd have been stuffed.

I got my one and only negative reaction from a conductor on the trip when I asked for the train to stop at Braystones.  I have to give kudos to Northern Rail; almost all the members of staff I spoke to on this trip were helpful, smiling and happy to oblige me with a halt at whatever Godforsaken outpost I asked for - a marked contrast from the staff on Arriva Trains Wales last year.  When I asked for a pause at Braystones, the guard visibly recoiled, like I'd asked her to do something obscene with my water bottle. 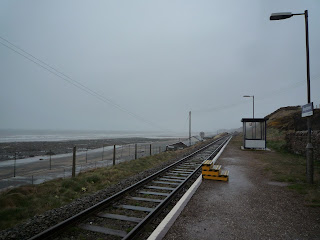 Perhaps she was just astonished that anyone would want to get off at Braystones.  I jumped down from the train onto the platform and waved my thanks as it departed.  Those steps above are nailed in place, and give you some indication of the distance between the train and the ground; "mind the gap" doesn't begin to cover it.  On other stations they'd adjust the platform height, but here - who's going to use it? 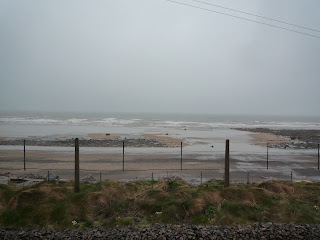 The halt - station is far too grandiose a term - is squeezed between a cliff and the beach, a single platform and a single track.  There's a shelter which, uniquely in my experience, doesn't face the track; the open entrance looks inland, so that the inhabitants get some protection from  the wind and rain coming in across the bay.

I trudged up the slope to the road.  There's not much around here; a caravan park, tin monsters lined up in rows to stare out to sea with their open front eye, and the village a little way away.  Anti-social railway fans (surely all of us) might be interested to learn that the old Station House is for sale, but don't go thinking you'll get a prime piece of real estate - it's an ugly pebble dashed cottage. 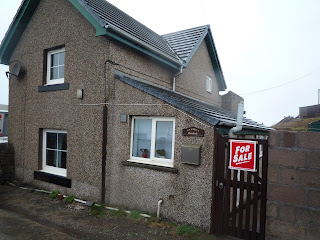 From here there was a long walk down a single track lane just to get to the main road.  There was at least a totem sign; I hadn't been confident of finding one, and I'd taken a photo with a platform sign as insurance. 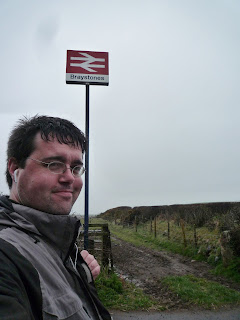 Yes, the weather had turned nasty again.  Little rivers of rain streaked mud down off the fields and over the road.  Cows clustered together for warmth; aren't they meant to lie down if it rains?  Or is that earthquakes? There wasn't any traffic, just me and a tediously long and straight road.  As is my habit, I began talking to myself since there was no-one around to hear.  Little pep talks, observations, complaints.  I counted on there being a village over the next hill, and swore when it was just another dip.  The next one then. 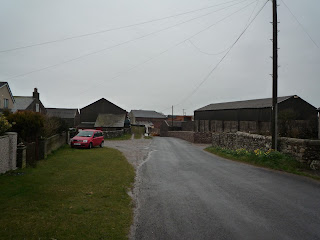 Nethertown finally appeared.  Linguists will note that "town" means "a place where people live" and "nether" means "the unmentionable parts".  I am merely pointing this out.  The road curled between barns and farm houses.  I got a shock when I spotted a swimming pool in the back of one house, along with a Costa-del-Sol series of white arches and a built in barbecue.  I wondered how much use it ever got. 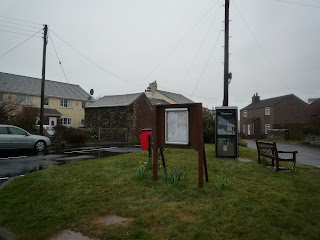 This trip really wasn't selling country living for me.  It seemed to be a string of empty cold hamlets full of ugly buildings and with nowhere to shop.  I'm no retail addict, but I'd like to be able to buy a pint of milk without a six mile walk.  Nethertown was just a series of silent houses gathered around poorly maintained tarmac.  I didn't fancy it even slightly. 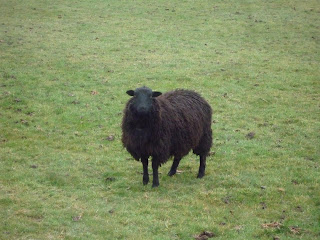 This was the only sign of life in the whole place.

Finally I found the station sign, again at the end of a long road to the coast. 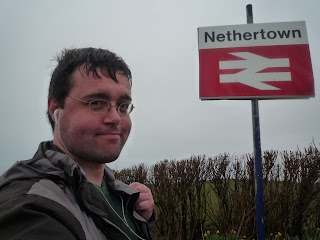 It has to be said, there was a real beauty to the station's isolation.  What had seemed alienating and unpleasant in a hamlet became a virtue here. 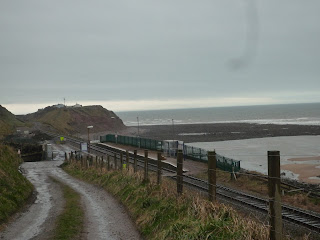 It was another single platform on a clifftop, though this time it turned its back on the sea.  There was a tunnel leading under the tracks, with a "Strictly No Entry" sign posted on it; naturally I immediately went for a look. 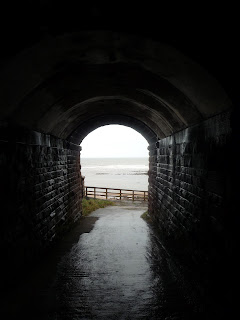 It was the access road to a small windswept home, barracked above the stony beach.  I couldn't imagine who would choose to live here, on the edge of nowhere.  I thought about being inside that house in November, windows rattling in a gale, the power failing, the trains silent for the day.  I'd just be waiting for the psychopath to come and put me out of misery, to be frank. 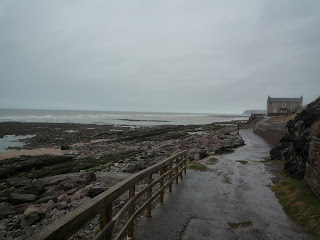 I returned to the isolated shelter to wait for my train.  Two hours here, on a clifftop, totally alone. 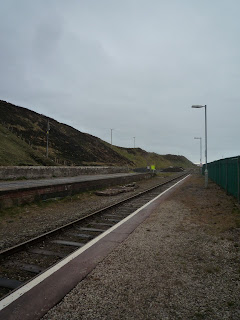 I'd like to say that I used the time for silent reflection.  For a spiritual awakening.  That I turned my thoughts in on myself and emerged from the peace a better person.

I didn't do that.  I put Tina Fey on my iPod and laughed.  I have her brilliant memoir Bossypants on audiobook, and it was the perfect entertainment.  A waterproof hasn't been invented that can keep you warm like happiness.  I felt a little self-conscious in laughing out loud in such an empty spot; I wondered if there was someone in that house, peering out the window, watching the idiot bent double for no apparent reason.  It is impossible not to laugh at her Sarah Palin sketch ("I can see Russia from my house!") or her thoughts on beauty regimes or the tale of her honeymoon aboard a burning cruise ship.  Having Tina Fey actually tell it, rather than just read it, made it even funnier.  If it made me look like a fool, so be it. 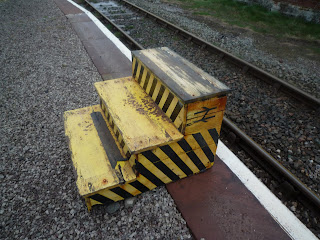 I actually used the steps to get on the train.  They were so rickety from lack of use, they wobbled as I clambered up, and nearly tipped me through the door.  It seemed the universe wanted me to look like an idiot that day.
Posted by Scott Willison at 21:20

Do things become rickety from lack of use? Surely otherwise? Or just lack of maintenance.

Your West Cumbria trip is not, I think , winning you any friends in the local tourist Board (if there is one) but it sounds rather like the Durham coast; naturally beautiful but industrially scarred, poor and depressed. You have gone, so we don't have to. We salute you! Treat yourself with the Esk Balley line next time!

I have a similar project to take a train along every line in Great Britain, and in several other places around the world too. I've completed Greater London and Greater Sydney, but can't find the time to do this.

I have actually taken the Cumbrian Coast line. Thankfully, my goal only requires passing a station on a train. Therefore, I agree with David B - you have gone, so I don't have to (get off and explore the area around each station, which I may do BY CAR when I am 70 years old - assuming this area isn't underwater and global warming hasn't killed us all).

Anyway, I just wanted to say that I'm so glad that I did not walk to Drigg after taking the Ravenglass steam train. I was going to, but then it started drizzling and I wimped out.

addendum: "can't find the time to do this" any more now that my parents don't pay for my upkeep

Used Nethertown today. Late last year it was exactly as you saw it. Now the stairs have gone and to my amazment they put one of those raised disabled "humps" on the platform in place of the stairs. Yet either side the platform is gravel, I wouldn't fancy trying to get a wheel chair off the platform! The telephone thatcwas here last time was now hidden under a bin bag, flapping in the wind with the recievef hanging down. I lifted up the bin bag to seecOut of Order written on the phone.

I live at Braystones and often climbed the maintenance ladder at the end of the train to get on board and jumped carefully down. Eventually they have raised the platform. The station house has sold. Is lovely inside. Wendy