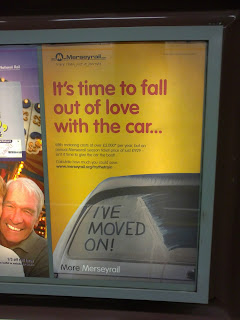 This isn't a political blog, so I shan't comment too much on the whys and wherefores of today's strike (other than saying UP THE WORKERS!  SOLIDARITY BROTHERS!  THE PEOPLE'S FLAG IS DEEPEST RED, etc).  What is interesting is how it affected Merseyside.  The strike by public sector workers meant that the tunnels were closed and the ferries were suspended; the only way across the river was by Merseyrail.

I happened to be going over to Liverpool anyway to see my friend Andrew, so I got to see how Merseyrail responded first hand.  I came back through Central at five o'clock, expecting to be hit with a tornado of furious commuters and befuddled Birkonians.  It actually turned out to be - well, much like a city centre underground station during rush hour.  There were a few British Transport Policemen on hand to quell the masses, in case they went mad, but there didn't seem much call for them. 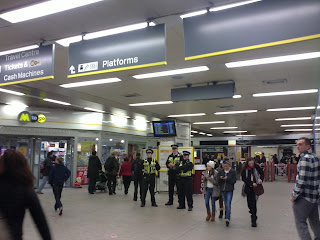 Heading below ground you got your first indication that this wasn't a regular day, because there were people on the escalator who didn't know you have to stand on the right.  This is obviously some secret code only people who use public transport every day know about.  How difficult is it?  Do you need a diagram?  A lesson?  Some kind of electroshock therapy?  People: officially very annoying. 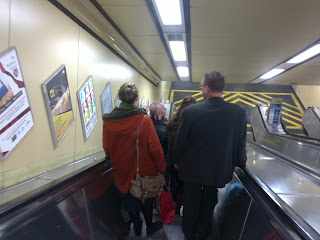 I thought that by the time I hit the platform there would be throngs, but it still wasn't that busy.  There were people about, lots of them, but was it any busier than a normal evening at Liverpool Central in the Christmas shopping season?  I'd say not.  I'm guessing that a lot of people took the day off, not to mention all those public sector workers who didn't have the need to commute into the city today. 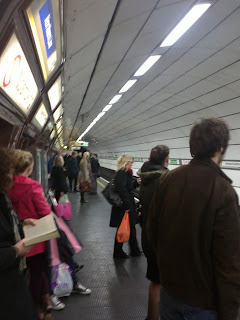 Merseyrail had planned ahead though, and arranged for a dispatcher on the platform.  I like to think that he had been specially trained in crowd control for today.  At the drop of a hat, he'd break out the white gloves and go into full Tokyo subway mode, shoving housewives onto the train without any regard for their dignity. 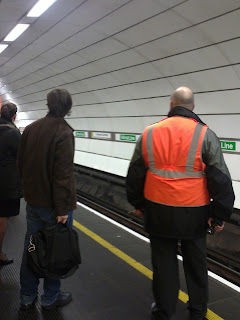 As it was he just had to stand at the front of the train holding a torch.  I don't understand the torch.

The train came in but again, it wasn't busy.  I could have got a seat without any problem.  Since I was getting off at Hamilton Square I stood up, right by two women who were giddy with excitement at using this new found "train" thing.  They cooed as we hit James Street, and aahed as we passed under the river.  Bless their simple souls. 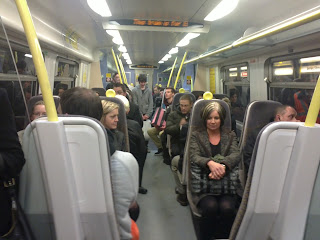 The normal cross river bus services had been rerouted via Hamilton Square, so there were more disembarkations than normal, but there were still enough people to fit on one lift.  To be honest the most out of the ordinary part was that I was riding the Beatles train, at last.  They should have got Paul McCartney to do the automated announcements.  Or at least one of the blokes from Yellow Submarine. 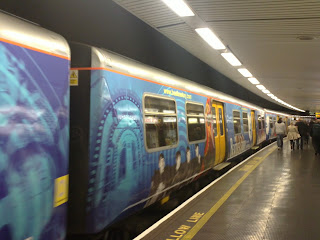 It did make me think about the strange relationship between Liverpool and the Wirral, and how easily it's broken.  Let's be honest: the peninsular is mainly a suburb of Liverpool, and yet it has only four connections across the Mersey - two road, one rail and one ferry.  There is no pedestrian route; no way to cross by bike.  There's no way to cross the river without paying a fee.  For that you'd have to go all the way down river to Runcorn - and that'll change when they build the second bridge, as both will be tolled when it opens.

The strike highlights how vulnerable the Wirral can be.  Merseyrail performed adeptly in the circumstances; though it's clear they weren't over taxed, they'd obviously made preparations.  What if they were on strike as well though?  I don't know what the answer is - any kind of bridge at this point in the river would have to be ludicrously high to accommodate shipping, and would you use a mile long foot tunnel?

The public sector workers' strike has actually demonstrated that their role is more than just collecting your bins or processing your Business Rates or caring for the sick.  Without them, the actual region becomes fractured, and movement becomes impossible.  Something to bear in mind, I think.
Posted by Scott Willison at 18:46

Flash the torch on white at the guard once its telling him to close to doors,then the second time it tells him/her to give the driver the ready to start signal. (haha i work for Merseyrail,not just random fact filled!!)

You learn something new every day! I thought maybe it was in case someone fell under the wheels ;)

Thanks for sticking up for us Scott (I was on strike yesterday), and your right, this is not a political blog,and all the better for it too, so I'll leave it there.....nice to see how prepared Merseyrail were though. Keep up the good work, great travel writing, always cool to catch up with your travels :-)be great when you have covered all the stations on the map, but a shame there will be no more....unless there is of course? :-)

I hate to be pedantic (well, I claim to hate) but there is actually a way to cross by bike, and it's (de facto) free too...

At night, once ferry/train connections have ceased, you can cycle through the Queensway tunnel. There's a nominal fee of a penny but I've never heard of it actually being charged. If the Queensway is closed they'll even let you through the Kingsway - though anecdotally I've heard of people being carted through on a landrover rather to avoid the effort of actually cycling.