And The Hoscar Goes To...

I was riding Gracie Fields. 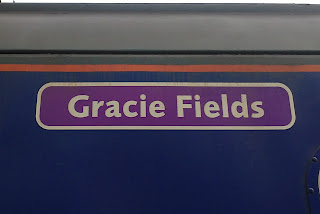 I have to admit, this was a first for me.  I'd been on Red Rum and John Peel, and I'd seen the Beatles, but never Gracie.  Gracie Fields is a real generational thing, isn't it?  Like Tommy Steele, or clackers.  It's sort of impossible to comprehend her appeal from the 21st Century.

Anyway, Gracie the train took me off through Lancashire.  Luckily they didn't play Sally the whole way.  I was off to finish that last bit of the Wigan-Southport line, the overlooked station at Hoscar.  To be frank, it's easily overlooked; I'm not sure National Rail is entirely aware it still exists.  It's north of Lathom, in the middle of flat fields, and not far from a sewage works.  No-one will mistake it for St Pancras International. 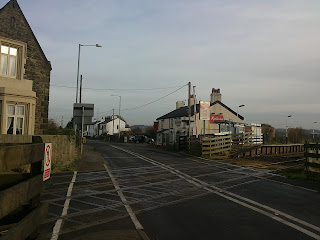 The station spreads across the level crossing, with a platform on either side, but this isn't the original layout: wander down the Southport platform and you'll see the remains of an older one on the opposite side.  It's now grown over and sitting in a farmer's field. 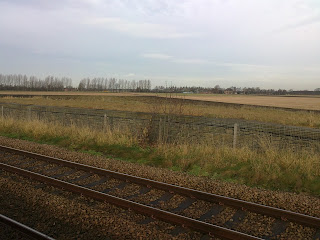 I also saw the neatly decapitated corpse of a pigeon.  You might not be so lucky.

The station building is still there. but it's a private house now.  The Railway Inn was closed at that time, too, though it got a crisp delivery while I sat there.  It was all very quiet and peaceful, even when the fast trains sped through and the level crossing beeped and whined its way into life.

This is normally the point where I trek off to a different station, or a place of outstanding local interest, or a canal or something.  That didn't happen at Hoscar.  A clue to why can be found in the Local Area Information map at the station: 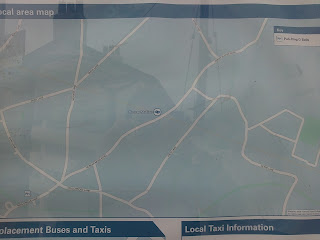 Plenty of features to enjoy there.

Instead I wandered to Lathom, and my friend Jennie picked me up, and we went out for an afternoon of coffee drinking and bitching at Cedar Farm.  It was a bit of an anti-climactic way to finish off an entire line on the Merseyrail map, but it's that kind of place. 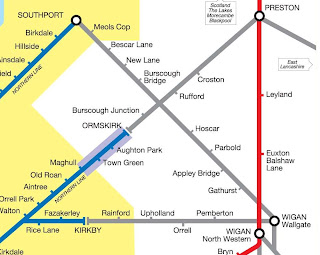 Lancashire's got some beautiful areas - the sandy coast, the Pennines, the desolate beauty of the moors.  The area of West Lancashire round Burscough is not in the same league.  It's utterly flat and boring.  The towns and villages are small and uninspired.  It's a grey region; a place to live and commute from.  My visit to Hoscar hadn't felt any different to New Lane or Bescar Lane or Appley Bridge.

But that's another significant part of the Merseyrail map gone.  In fact, in that entire square above, I only have Leyland and Euxton Balshaw Lane still to collect.  Remember when I hadn't even touched the red and grey lines?  That was a long time ago.... 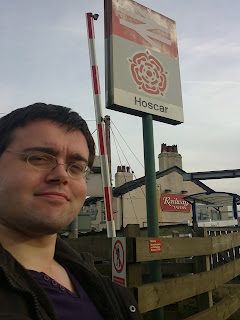 Any chance of new map with all the stations you've covered scratched off? I might be wrong but I don't think you've done one for a while.