The Liverpool Empire on a Thursday night.  I could only be there for one reason. 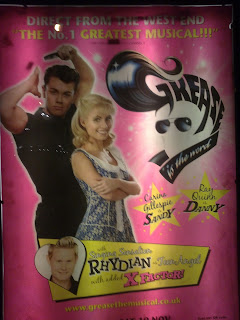 Of course not.  Ray Quinn as Danny?  Can you imagine?

No, I was here for a far more interesting reason.  A party.

I wasn't looking forward to it.  I never do.  I am, at heart, deeply shy, deeply antisocial, and deeply awkward.  I'd doped myself up with my special uppers (they're prescription pills, before you write in) but I could still feel my stomach twisting itself into a Möbius strip in my belly.  If I'm honest, listening to Ian's Midwinter Moon on the way there probably didn't put me in the party mood.  It's a lovely tune, but it's not exactly Do You Wanna Funk?, is it?

I couldn't say no, though.  Sally from Merseyrail had contacted me and very kindly invited me to this special occasion: Bart Schmeink's leaving party.  Refusing wasn't even an option. 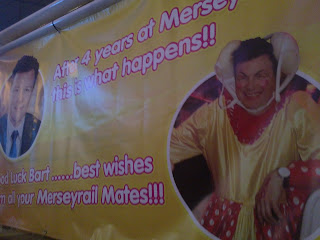 I came into the party behind a load of people who'd made the trek from Rail House, so I wandered over to the bar and got myself a beer.  They'd put on a great spread for Bart: sandwiches and quiches and chicken satay, and tiers of Merseyrail cupcakes. 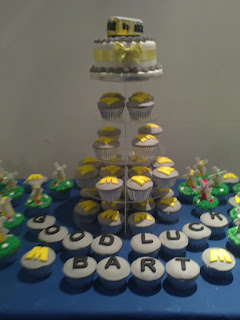 I was seriously tempted to steal the marzipan train from the top.  In addition there were Bart Schmeink dollar bills as party favours; you can bet I robbed one of those.

A projector beamed moments from Bart's tenure onto the ceiling of the Empire bar, which mainly seemed to be him dressed up for Children in Need and Comic Relief over the years.  I started to feel sorry for him, actually.  He's a serious businessman but once or twice a year he's required to put on a frock and arse around in Liverpool Central. 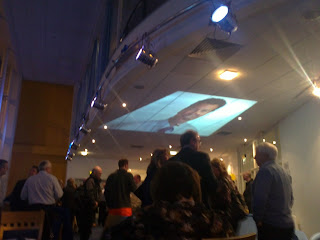 My fellow guests were lovely to me, even though I was, let's face it, an interloper.  They involved me in their conversations, said nice things about the blog, asked me how many stations I had left to go.  A lot of them asked me what I'm going to do next, to which the answer is, "erm, I dunno."  I wasn't exactly a sparkling presence, put it that way.

After a while I retreated to a corner with my beer and watched the party.  There was a Merseyrail employee tinkling on the theatre's piano, very ably in fact, and I listened to him play while people chatted around me.  I felt very out of place.  This was a works do, after all; I was an invited guest but I wasn't one of them. 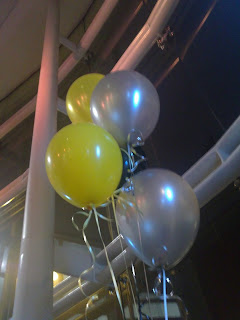 I thought I should go and speak to Bart, say my goodbyes, say nice things, but he was the star of the show - there was always someone round him.  I didn't feel confident enough to wander up and interrupt.  Then the barman recognised what I was going to order before I even reached the bar, and I thought maybe it was time to go.

So I went to the party but I wasn't a hit.  Sometimes my anxiety wins, and this was one of those occasions.

Good luck to you anyway, Mr Schmeink.  Liverpool's loss is Amsterdam's gain.  Maybe I'll nip into GVB headquarters next time I'm in the Netherlands.
Posted by Scott Willison at 16:21

Nice one ! I'd be chuffed to bits to be invited to such an event, even though, like you, I'd feel a bit like a fish out of water !

With Merseyrail firmly under wraps, have you thought of doing something similar with the many closed stations on Merseyside ? You'd be surprised just have much remains, even of stations that closed 60 years ago !