The Walrus and the Tart

I did something unusual on Sunday night: I got a bus.  I'd been out for a couple of pints in town and instead of getting the train back I took the 437 to West Kirby home. 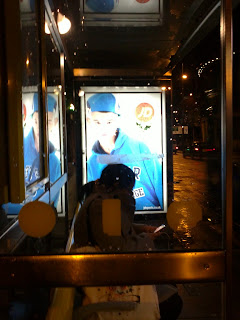 I don't normally take buses for a few reasons.  I like trains, obviously, and Merseyrail provide a good regular service.  I've never been really comfortable on buses, and they seem to attract a disproportionate amount of insane people.  I like the certainty of railway stations and train lines.  Finding out where a bus goes to and from is a hassle, especially if you're going somewhere unfamiliar, and it's not always easy to find out where to go (Merseytravel's bus timetable site is a nightmare in this regard).

However, it was a wet, miserable night, I didn't fancy the walk home, and I had access to wi-fi in the pub so I was able to do a few internet searches to find out where I was going and where my nearest stop was.  I had a bit of a panic when I asked for a single to Claughton, and the driver said "where?"; it was on the route but it seemed he didn't understand me for some reason.

The 437 was comfortable and quiet.  There were a smattering of people, and none of them seemed to be particularly mad.  The last time I got the bus under the river was a Saturday night Tunnel Bus, fifteen years ago, with a (cough) gentleman friend; it was like being trapped inside a vomit soaked sex club for ten minutes, with all sorts of drunken, debauched behaviour surrounding me.  This was much more civilised and pleasant. 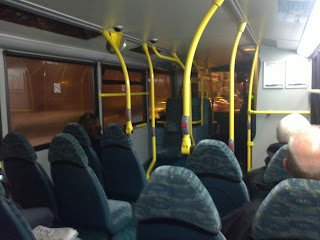 I got off the bus and walked the five minutes or so home.  I wondered why I didn't take the bus more often.  I realised it was the little things - the uncertainties about fares and bus stops and routes, the timetables being a bit odd.  Just niggly points that mean I'd rather walk to a Merseyrail station than head for the bus stop at the end of my street.

And that's why we need Walrus: for people like me.  An all in one smart card that is the key to Merseyside's entire network.  Because I'd be quite happy to swipe onto the first bus I saw and see where it went.  I'd be more confident at risking an unknown bus that was going in vaguely the right direction if I knew my Walrus card had all the cost covered.  It'd also mean I wouldn't have wasted the return portion of my train ticket - I wouldn't have been charged for it in the first place.  It's something I've done before in London, with my Oyster card - nipped onto a double decker rather than walk to the South Bank, or take an Overground train for a change instead of the Underground.

The Walrus would open up the bus and train network for people who don't use public transport often.  Stick one in your wallet with twenty quid stored on it, and then just hop aboard a bus when it's raining, or the ferry when you fancy a change from Merseyrail, or a train into town because you can't face the idea of parking.  It takes away the worry of how much and where you go and what you do.  Walk in - waft your Walrus - walk out.  Simple.

I know this isn't brain surgery.  The Oyster's done all the ground work for us.  It just came home to me on Sunday what a great thing the Walrus card will be.  I can't wait. 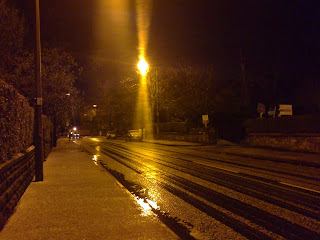 The number of times when, on trips back home to Liverpool, I've nearly hopped on a bus because it happened to be there and then realised I should actually check if I've got cash/change on me first, drives home just how much I've got used to the freedom of Oyster. It's such a good system I'm surprised it's not already in use elsewhere, so Walrus can surely only be a good thing (despite the dreadful, dreadful name).

Of course part of the reason why Oyster is so simple is due to the flat-fare for PAYG. It's going to be more complicated with different fares, as you're going to have to "touch in" *and* "touch out" (albeit possibly at the same time as you board)

I have a County Card season ticket in Greater Manchester: any bus, any train (so like a Merseytravel Trio all-zone ticket but you can't use it on the Metrolink, boo hiss). It's so amazingly easy to use, can't wait to get a smartcard version.