How did I miss this? Back in April last year, I blogged about the Art on the Network, Merseytravel's laudable attempt to bring more artwork into the region. It was a competition looking for pieces of art to be erected in public places around Merseyside, and I was thrilled to see it happening (even if I had a bit of a bitch about the entry form).

Unfortunately, what with last year being a bit tumultuous and all, I missed the results. So the appearance of a giant piece of writing at Liverpool Central came as a bit of a shock. 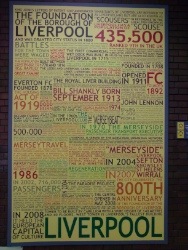 It is, admittedly, tucked away a bit, by the subway to Lewis's and the Fairclough Street exit, but it's ten feet tall and a great find. Designed by Tony Fitzpatrick, the words follow the history of the city, alighting on Liverpool's historic touchstones. You start at the top left, with the granting of letters of patent by King John in 1207: 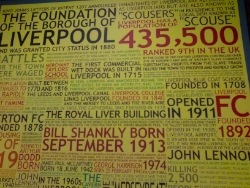 and work your way down the centuries to the construction of the West Tower, the city's tallest building, and the Capital of Culture year: 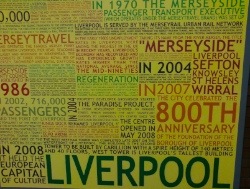 It's marvellous, fascinating stuff, and if there hadn't been three drunken homeless people squatting on the stairs of the Lewis's subway I'd have probably been there all day. Just looking over the pictures, I've been drawn in, not just by the facts, but also in the way they've been arranged - Tony Fitzpatrick's done a great job in arranging colours and fonts to pull your eyes around, make you look, make you search. You can click any of the photos for larger versions. 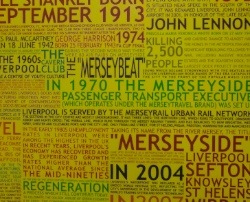 Yup, Merseyrail's on there, along with mentions of the Blitz, Brookside, the cancelled Merseytram, Ken Dodd, the Cathedrals, the Liverpool & Manchester Railway, the Royal Liver Building, Cilla Black... I'm guessing Fitzpatrick's a Liverpool fan, given the prominence of Bill Shankly front and centre (though Everton still make an appearance). There's mention of the Cavern, famous for me getting extremely drunk and trying to cop off with straight boys in the mid-Nineties, and also for being the place where some pop group played in the Sixties (interestingly, though all four members can be seen quite prominently, the words "The Beatles" are in the tiniest script and barely visible - I really had to hunt for them). 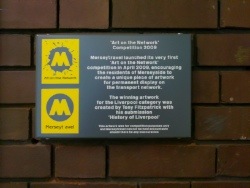 Well done, Tony Fitzpatrick: it's a great piece. If you're in Central, go and see it. It's more interesting than standing on the platform waiting for your train, anyway (and less dangerous).

As for the other winners - they were announced in December last year, and I can only apologise for not reporting it here before. Ron Davies' piece Magical Backdrop won the right to be displayed at Waterloo Station, while Daniela Visone's Journey will be erected at Whiston. I'm not sure if they have actually already been put up, to be honest - the press release says "early 2010", so I'll have to make a couple of return visits to be sure. I'm looking forward to seeing them.

Together, the three winners represented the boroughs of Liverpool, Knowsley and Sefton: embarrassingly, Wirral and St Helens couldn't rustle up decent enough entries between them, and so their stations will remain unadorned. This is quite shameful, and I wish I had some artistic talent so that at least Wirral could be represented. There must be some artists out there, surely?

You're right, it is a bit tucked away. I didn't even know there was a side entrance to Central Station and I've been using the station for twenty odd years.

It would have been better situated where people could read it while they wait for the train to pass the time.

Thanks for your comments though.

Thanks again Tony - I really love that piece and I wish it was more notable. Hopefully with Central Village coming into the station and a new entrance being built your brilliant artwork will get the attention it deserves!