OK, the Merseyrail map can't, and never will, compete with the Underground map for icon status. It's never going to reach those dizzy heights.


It has none the less achieved a level of fame and acceptance across Merseyside, to the extent that you can have something like Centre of the Universe playing with its forms. As Mark Ovenden's excellent Metro Maps of the World book said, a good transit map defines the city, and its ubiquity means that the Merseyrail map does that. Certainly, as someone who's not from Liverpool, I find it hard to place areas that aren't on the map - districts like Childwall or Knotty Ash are mysteriously "over there somewhere", while I could find my way to Orrell Park blindfolded.


That doesn't mean that the Merseytravel version is the only map out there. It's interesting to find alternatives to the established map elsewhere. 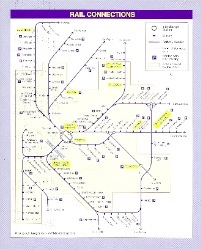 This one is from the back of my Liverpool A-Z, and as one would expect from a classic mapmaker, it's a pretty decent effort. Sorry for its grubbiness: that A-Z has been carted all over Merseyside down the years. I should also apologise for it being a few years out of date (no South Parkway), but I'm just trying to get my money's worth out of it.


One aspect that I do like about this map is its attempt to ape the diagonal of the Mersey, and the way it then affects the Wirral. Rather than have the simple vertical the "proper" map does, this one shows a fairly accurate angle. The Mersey itself only appears where the railway crosses it - an interesting choice, especially since there's plenty of room to show it. Not sure if I'm keen on that, especially as it doesn't reappear at Runcorn (considering you can actually see the river from the platform, this seems a particularly odd choice).


The single colour is also surprisingly good. You'd think you'd need to differentiate between the various lines but the map is still easy to read and use.

The downsides? Well, the interchange circles are not done very well. Look at this section of the map, and we see the circles being used in different ways. At Moorfields and Liverpool Central, interlinked circles show interchange between two through lines. At Lime Street, the same two circles show an interchange between a terminating service and a through line. At Hunts Cross though, one circle is enough to show the Northern Line ending alongside City Line trains. While at Allerton, the next station along, the single circle is used to show a split in the services, inadvertently implying that trains from Runcorn terminate there. Mixed messages throughout, and not so useful in planning a journey. I guess an A-Z is a road map, first and foremost, so it's not really there for route planning, but still.


As for the interchange at Earlestown - well that's pretty special. 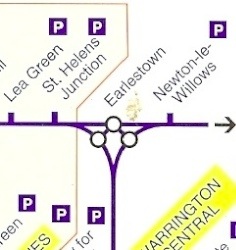 There's no indication of service breaks, so the map implies you can get a through train to Meols Cop and Orrell from Liverpool city centre. And would it have been so hard to make the map an inch bigger so you could squeeze Bache and Chester in, and finish off the Wirral Line? They're the only Merseyrail stations entirely missing from the map.


Not a bad effort then - 7/10. If anyone's got any other Merseymaps they've come across, I'd love to see them.
Posted by Scott Willison at 11:43

I like the way they've got a limited service only in the key but they choose to ignore it for Ince & Elton and Stanlow!

To be fair, I think the limited service they're actually showing there is the once a week, Saturday morning, Summer only, oh do we have to? parliamentary train service between Chester and Runcorn via the Halton Curve. Next to that, four times a week Ince and Stanlow are practically metro frequency!