I was off out yesterday, heading to Manchester for a Eurovision meet up. Yes, a Eurovision meet up. WANT TO MAKE SOMETHING OF IT? It was basically an excuse for a bunch of fans to gather together and bitch about how dreadful "That Sounds Good To Me" really is, while drinking a load of booze. We all took our own little scoreboards, and if I remember rightly, our chosen winner was Azerbaijan. Or maybe Romania. I think I was up to my fourth pint of bitter by then, so I can't really remember. (Go to Boom Bang A Blog for the full, and better written, story). Certainly my twelve pointer, Spain, didn't win, which was criminal. Still, here we all are:

So what has all this got to do with Merseyrail? Very little actually, apart from the fact that I finally indulged a curiosity on my way there. Hamilton Square dates back to 1886, and even though it looks modern - well, 1970s - with its cream and brown walls, it's actually all a veneer. Beneath the plastic walls is a Victorian relic, one that you can still spot if you look hard enough.

One of the hangovers from the nineteenth century is a bog. Yup, tucked right at the end of the Liverpool bound platform is a tiny sign pointing out a Gents toilet (sorry ladies, you'll have to cross your legs). It's barely visible, and in fact, I've never seen anyone using it. It's most visible from the train, just before you head into the tunnel, when its strange blue glowing doorway catches your attention. 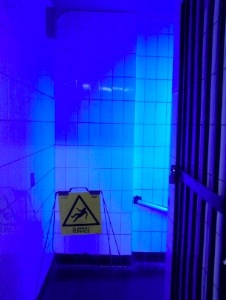 As I had a few moments to spare before my train arrived, I decided to finally poke my head round the corner. The blue lighting, there to stop drug addicts from spotting a vein, gives it a strange, otherworldly air: as I stepped inside it felt like I was boarding the mothership. A mothership that stank of old urine. 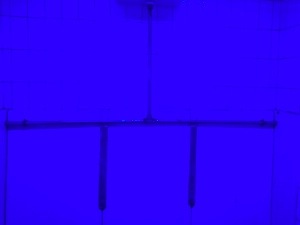 All there was inside was the single trough, no cubicles, and it creeped me out. I don't know what it was about this tiled cell, but it just felt like a place to dump corpses. I stepped back swiftly, before someone came up behind me and bludgeoned me to death, leaving me slumped uncomfortably up against the urinal. Victorian gentlemen must have been made of sterner stuff than I.

I backed into the well lit station, glad that I'd finally satiated my curiosity about what was inside. I really didn't feel the need to go back. Ever. So despite what you may have heard, that's the last time I loiter round a public toilet taking photos...

Now this is my kind of post! Azerbaijan probably will win it and if they don't then it's going to be waaaaaaaay too close to call. Perhaps Romania, Greece and maybe even Croatia will have a shout at the top spot. What is for sure now after their rather awful rehearsals is that Denmark and (one of my favourites) Germany have little to no chance of winning. :( And how could you like Spain?! It's horrid! Not a patch on the second placed song at Spain's national final "En Una Vida" which would have been top 5 at Eurovision, guaranteed. It's Slovakia all the way for me tomorrow night! If they don't qualify for Saturday I'll go in that toilet and try and slit my wrists if I can see them!

Speaking of, my only experience with that tardis is when a female friend of mine begged me to go in and see if there was anyone in there as she was so desperate for the toilet. Needless to say she was disappointed when I came back to say it was a urinal (a pathetic excuse for a urinal at that). Strange it doesn't stink up the entire platform. Indeed strange that it's there at all.

I'm told that this location was once "busier" than it is now; and the migraine-inducing UV light was introduced by BR to reduce the fun of bored businessmen as well as the local smackheads.

It has been dead long enough for squirt.org to know nothing about it. Not that I know anything about that site. Personally I've never heard of it.

You should have come along Gottago! Next year ;-)

I love Spain because it's got a delicacy, and it slowly builds up and up to something special. The problem is that it's been over-egged with the show - all those clowns and stuff. It's detrimental to the simplicity of the song. Romania's second fave for me, and I liked Denmark and Germany, though I haven't seen the rehearsals. I prefer to wait to be horrified/impressed on the night!

Trust you, Jamie, to know of its more undesirable aspects... I can see how it would be popular for, ahem, "relaxation" purposes between trains, but I can't believe any self-respecting gay would be put off by low lighting! I don't understand why they don't just lock it up permanently - it's surely more hassle than it's worth to keep it open, cleaned, secure, etc. Plus the lack of cubicles and ladies facilities makes it usable to only a minority of passengers.

I used to change trains there twice a day and have therefore had reason to use it many times!

They did indeed lock it up for a while but re-opened it again after a few months, presumably because they'd received complaints. Remember the annoying Passenger Focus organisation has a fit and makes an enormous fuss whenever any train company closes toilets, however useless or restrictive they may be, and it wouldn't surprise me if they kept it open to save face.

I was also once told that they've got to keep maintaining it because the drainage for the rest of the station goes through/behind it (there must be sinks and toilets somewhere else for the staff...) so it's presumably no extra work to let people use it. I'd love to know if there's any truth in this...

[Alternatively, it doesn't take MI5-level observation skills to notice that it's used mostly by train drivers who nip out for a quick piss while their train's stopped at the station - the vast majority of them are still men, even in this 21st century of ours - and that's why I personally suppose it's open. After all it's not signed anywhere, so you have to know it's there, and it's right next to drivers' cabs...]