Are You Being Served? (No.)

See, here's the thing: I never got the fondness for Lewis's. I accept this is because I'm a foreigner to Liverpool. This is one of those things about Scouseland that I will never understand, like the continued presence of the Orange Order, or Roger McGough, or how you decide whether to be a Liverpool or an Everton fan (I mean, Everton have never won anything. Why on earth would you ally yourself with them? I just don't get it.) 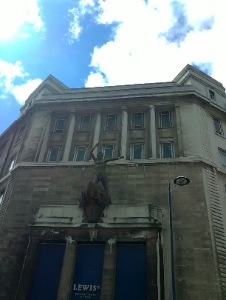 The point is that I've lived in the Liverpool area for fifteen years, and I've heard of Lewis's as this "legendary" store, but to me it's always been "that slightly naff store opposite the Adelphi". Even before the various refurbishments, George Henry Lee's peed all over Lewis's: it was like a bargain basement warehouse. And I don't mind that, per se, except Lewis's had the reputation of being the queen of Liverpool's stores, and it just couldn't cash that cheque. It's rather like the Adelphi, which has a name but nothing more: the Adelphi can't compare with the Hilton or the Racquet Club or the Hope Street Hotel, but it clings on due to affection and fame. Lewis's is like that but it's less understandable to outsiders. The Adelphi has a ballroom and a history: Lewis's has a vaguely well hung statue over its entrance. (And to be frank, I've seen bigger).

This is an elaborate way of saying, I wasn't too unhappy about hearing of Lewis's demise. A quick wander round Liverpool city centre reveals a load of stores doing the same thing as Lewis's only better, classier, cheaper: it was sad to see a local name go, but at the end of the day, was it worth keeping? And the scheme for its replacement - with cinemas, retail, plaza and hotels, plus a refurbishment of the station - strikes me as infinitely preferable. 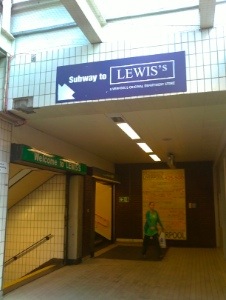 But one way that Lewis's scored over other, lesser department stores, was in its transport links. It's one of those legends of metro transport that Henry Selfridge offered to build a glamorous ticket hall and an underground subway to his department store from Bond Street Tube station, but it was refused. Lewis's, however, managed to get its own subway from Liverpool Central, and furthermore was powerful enough to insist that it be retained in the 1970s rebuild.

With the store due to close by the end of May, I thought it was important that I headed there to check it out and to capture the station entrance for posterity. Though it is still the only store with a direct link from the station complex, the Lewis's link's importance has been lost over the decades, usurped by the mini shopping mall directly outside Liverpool Central's entrance. The subway looks distinctly shabby next to a Sainsbury's Metro and Games Workshop. 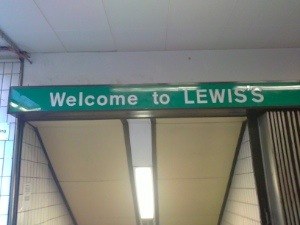 I've already reported on the station's beautiful Liver Birds, so I won't dwell on them here. All I'll say is that the Bf and I passed through the station and the subway, and not only learned - via the graffiti - that smoking spliffs is good, but also that Billy is a fag. You see, you don't get that kind of information everywhere, do you?

We entered the department store, and I got a picture of myself in front of the entrance that was no doubt not much longer for this earth: 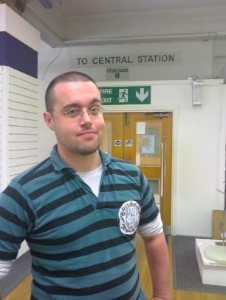 I hope that I've managed to convey the embarrassment I felt at being in this photo. Because wandering round the store felt like picking over the heirlooms after a funeral tea. "I don't think much of the Capa de Monte." "Never mind, there's a widescreen telly here that's only a couple of years old - I'll slip it into my suitcase while you keep them talking." The Bf and I spent a frankly obscene amount of money on new bedding in John Lewis two weeks ago. Though the stuff in Lewis's was reasonably priced, what with the discounts as well, we couldn't bring ourselves to actually buy anything, because it felt like kicking an old lady when she was down. 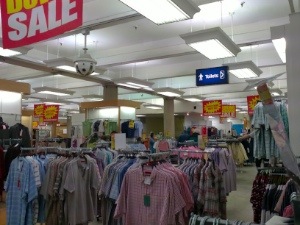 Things got worse when we headed to the menswear department. The Bf needed some new jeans, so we thought we would have a look while we were there. Now, neither of us has ever been mistaken for Gok Wan, and in fact our main criteria for fashion is "something that conceals the beer gut": but we still recoiled in horror at the lurid, garishly discoloured "clothing" on display in the menswear section. Even Mr Humphries would have called for his smelling salts when presented with the pink paisley shirts and skinny fit polo necks of the first floor. It was like a display of "why we have failed", underlined by the checkout woman gleefully telling a shopper that she would turn sixty in a week's time. We found ourselves fleeing to the street, happy to leave and find a new place to shop. Every other shopper in the store was over fifty - I was the only person who remembered Going Live in the entire building. It made BHS look like a Voodou hair salon.

Lewis's, I'll miss you for what you were: a touchstone, a memory, an affectionate home for the citizens of Liverpool. I'll just ignore the reality.

Email ThisBlogThis!Share to TwitterShare to FacebookShare to Pinterest
Labels: Liverpool Central, The BF

There is, or was, a Lewis's in Manchester as well, occupying an extremely prime position on the corner of Piccadilly Gardens and Market Street. Not sure what it was like as a shop, for although I lived in M/c for 7 years I don't think I ever went in it.

There was a really odd sign up this evening at Central outside the closed Lewis's subway, saying something to the effect of "Merseyrail staff cannot help with enquiries about Lewis's"

I have this image of confused old ladies trying to get refunds on their £2 blouses from the MtoGo shop.

I bought my electric potato peeler (for ordinary potatoes, not for electric ones) from Lewis's. And a pair of curtains. Ten years passed between the two purchases.