Last year Merseyrail wheeled out a whole load of new signs at the Underground stations. Grey and yellow, instead of the bog standard white ones, at first I thought these were cool. There were spider diagrams to show you where your train was going. There were clearer exit signs, showing escalators and lifts. They even marked out which platform you were on. 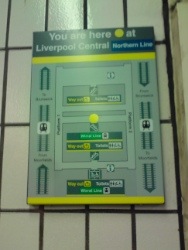 Then things started getting silly. Diagrams of the stations themselves started appearing, because apparently "Way Out" signs weren't enough. Oh, no. You need to know where you are, and where the escalators are, and where the train tracks are now. No matter that the diagram's ridiculously over complicated for what you need, and no matter that, to my knowledge, no-one has accidentally wandered into the railway tunnel at Liverpool Central thinking it was an escalator. (Incidentally, in my experience, the diagram at James Street succeeded in confusing more people than it helped. Once underground, James Street can be a confusing warren of defunct corridors and new platforms, and suddenly pointing these out to people just lead to them trying to board trains on platforms that hadn't seen regular service since 1978). And then they started sticking signs up in corridors on the way out, so you can pick the right exit at Moorfields or Lime Street and don't get horribly confused and have to, you know, use your brain. In short, someone gave them a load of money to put up some signs, and they went crazy.

Yet the strangest thing about all this is, they didn't actually put up any signs that might be of use to your average Merseyrail traveller. Fortunately, help is at hand. As with so many things, the Americans are way ahead of us in this regard. The lovely Emily, a.k.a Cat Girl, writes a great, fascinating and beautifully designed blog about the New York transit network, I Ride The Harlem Line. She spotted the gap in the market for warning signs and created some for the Metro-North network over there, and, with her permission, I'm posting some of her signs here as suggestions for Merseyrail to consider in future. You're welcome. 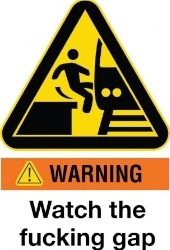 "Mind The Gap" just doesn't cut it sometimes. It's polite, but have you ever tried boarding a train at Hamilton Square? That's not a gap - it's the Grand Canyon. You need a cable car to get across it. This sign would make it abundantly clear that you need to have your wits about you, so don't frigging complain when you drop your handbag. 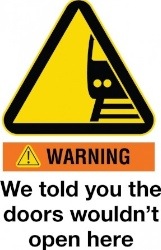 Anyone who's been through Green Lane will have seen the giant red signs shouting "DO NOT ALIGHT HERE" in the tunnel. And yet, every time, there are imbeciles on six car trains who queue up to get off and end up staring at a brick wall. Next time, they should just open the doors, then, when they fall on the track, they can look up and see this sign staring back at them. 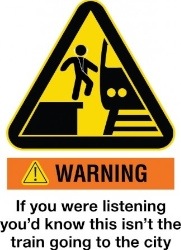 God, this one is desperately needed. Dear everyone on the Wirral Line: there are two platforms. One heads away from the city centre, one heads towards it. When you get on the train, the automated voice tells you where the train is headed. There is therefore no need for you to get exasperated, swear, and leap off the train at the next station when you realise you're headed for Chester. That's you being thick, and it's not Merseyrail's fault. If you wasn't listening to Nickelback at maximum volume you might not have brain damage. 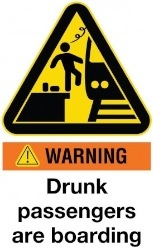 Yes. Public drunkenness is a fine British tradition, dating back to the Middle Ages. It's part of our national heritage, like plates with Princess Diana's face on them and chicken tikka masala and Dame Judi Dench. Unfortunately, when you're sober on an underground train at eleven on a Saturday night, you might forget this. You might want to just get home. This sign efficiently reminds you that you're the minority, a freak, and really you'd have been better off downing a bottle of Lambrini before you clambered aboard. Otherwise, the pissed up fourteen year olds holding the doors open in the stations, clambering all over the seats like monkeys at a safari park, and filling the carriage with their own distinctive scent (Eau de Vomite) might start to get you down. This sign should be erected at weekends, public holidays, and throughout the month of December, right next to a stand handing out vodka shots.

Hopefully these signs will soon go into production, and I look forward to seeing them all over our local trains. Remember: if there isn't a sign, how will people know what to think?

(Many thanks to Emily)

Yes those small signs are particularly confusing and so very unnecessary. I'd rather they saved up their money for something better.

And I've always found it funny that the doors continue to open in the tunnel at Green Lane. There's plenty of London Underground stations where there's not enough platform but they always manage to keep the affected doors shut. Why can't Merseyrail do the same?

Emily is amazing. I love those signs so much! I want to wear all of them on shirts and put stickers around the train station. I'm glad you checked it/her out!