In the first of what will no doubt be a very occasional series, we bring you Celebrities on Merseyrail. Yes, it does happen, now and then. Today's special guest celeb is Agyness Deyn, fashion model, fashion muse, and general all round fashion person, who for some reason is in Liverpool. This may have something to do with her on/off relationship with Miles Kane from the Last Shadow Puppets, but I haven't bought Heat in years so I don't feel qualified to comment on that. What I can comment on is La Dean's Twitter feed, which threw up the following yesterday:

Liverpool has an underground!!! It's the friendly brother of the London underground but on dreamy hallucinogens.

to which I say: eh? "Dreamy hallucinogens"? I've never ridden the Tube while smacked out of my head, so I'll have to take Aggy's word for that. Admittedly all that brown melanine in the station can make your eyes go squiggy after a while. Still, I have to agree about it being the Underground's friendly brother.

She then went on to say:

Merseyrail moto... 'It's fine because it's fair'.

Isn't it though? Well done Aggy. And well done Merseyrail for getting a free ad for your penalty fares scheme from a supermodel with 22,000 followers. Admittedly, out of context it doesn't make sense, and she's spelt "motto" wrong, but we all get the gist. Unless she'd just got caught without a ticket at Conway Park, and was being ironic? Perhaps Agyness was tweeting from the back of a meat wagon on its way to Birkenhead police station. We need to be told. 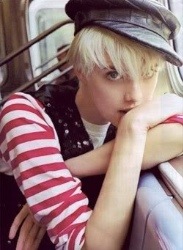 It's nice to see that she was positive about her Merseyrail experience, though, and as a result she has gone up in my estimation. I'm even going to forgive her for spelling Agnes wrong now, which I'm sure she'll be pleased about. I hope that this is a regular occurrence, now, and we get a swarm of supermodels all over the network. Naomi Campbell assaulting a ticket inspector at Blundellsands and Crosby. Kate Moss snorting "substances" on a six-car train to Chester. Tyra Banks and her Fierce Weave scaring the schoolkids at Aigburth. The possibilities are endless. Do let me know if you spot Cindy Crawford, or indeed, anyone famous on a Merseyrail train. Then we can all bask in the knowledge that they're just like us.

Have any of the professional scousers (Cilla, Tarby, etc etc) been spotted on Merseyrail recently?

I think that would involve one of the professional Scousers having to come to Liverpool, so I can't see it every happening...