Only A Northern Soul

This is my Mum on top of the Empire State Building. 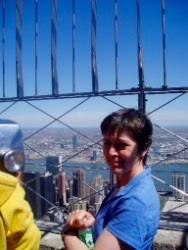 She has gifted many things to me over the years. Ramrod straight hair (my brother got our Dad's curls). A love of Motown. A habit of sticking my bottom lip out under my top one. And outrageous, all-consuming snobbery.

I am a terrible snob, I admit it. I've already proved it on here. But my Mum takes that snobbishness to new, galactic levels at times.

One of her pet topics is how awful the North is. Every time she comes to visit - which isn't often - she'll marvel at some new element of terribleness that only exists north of the Watford Gap. To her, the North is where people who can't afford to move to the South live.

Example: on her first visit to Liverpool, she was shocked to see a BMW drive by. "How can someone round here afford a BMW?" she mused. "Perhaps he's a drug dealer."

Example: after taking her to the Pier Head, the museums, the Cathedrals, in a tour of the city's magnificence, the one element she chose to give a lengthy monologue on was the now-demolished footbridge over the Strand and how awful it was.

Example: she found Southport "surprisingly alright". "It's like a proper town."

Example: only last week, she watched a film set in Liverpool. "Of course, they tried to make it look nice."

She snorted. "Someone still got mugged though."

See what I mean? I've lived here for fifteen years now, and she still can't quite understand why. There are some things she likes around here - she once saw Jimmy Corkhill coming out of the FACT - but all in all it's Just. Not. Good. Enough.

For myself, I'm sort of in a limbo between South and North. My accent gives me away every time - talking about "barths" instead of "baths" and "arnties" instead of "a(u)nties", and pronouncing "down" as "dahn". I have an outsider's perspective on some things - for example, I'd love to know how you decide whether to support Liverpool or Everton. I can't work out why people would support the Blues when they don't seem to win anything. But at the same time, I'm passionate about the city, and I'm full of pride about the beauty of the area. Where I live on the Wirral, within an hour's drive, I can be in the Welsh mountains, the throbbing heart of big cities, the Cheshire plains, or on a beach - where else in the country can you say that? I can't think of myself anywhere but here (with the obvious caveat that if Russell Tovey calls me up and invites me to share his flat in London, I'll be on a Virgin Train so fast I'll leave flames on the pavement behind me).

The reason for this lengthy preamble is that I was heading into Wigan, which is about as "Northern" as it's possible to get. I'm not sure how it's acquired this reputation, but if ever there were a town whose name reeked of whippets, flat caps and ee by gum it's Wigan. It's probably Orwell's fault. When he rode a train into the town, he talked about vast piles of slag by the side of the track, mountains of the stuff, and the grim, miserable lives of the put-upon inhabitants.

My ride into Wigan Wallgate, on the other hand, was marked by the view of the back of Currys Superstores and Carpet Warehouses, and by a large wide open expanse of green parkland. I had to stretch my imagination to see this black mountainous hell-hole. To me, it just looked like another little town. 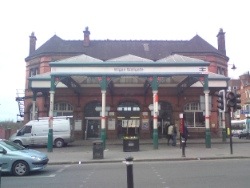 The station was a neat little Victorian relic, nicely preserved, though in possession of one of the grimmest toilets I have ever had the misfortune to pee in. (Blocked urinal, ultraviolent anti-druggie lighting AND mashed up loo paper in the sink? Why Northern Rail, you are really spoiling us). At platform level, it was a bit better, and by the time I got up to the booking hall it was positively charming. I'll forgive anything if there's a porte-cochere. That's proper old-style railway architecture, that is. 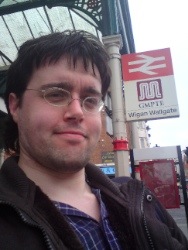 I took the usual pic, with another boring GMPTE railway sign, and then headed into the town. The other train station in Wigan, North Western, is only fifty yards away, but I wanted to go into the town to have a wander round this haven of Northernness. To be specific, I wanted to have a pie.

Wiganers are called Pie-Eaters. The theory is that this came about following the General Strike, when the town's residents were the first back to work so they ate "humble pie". Personally, I just like the idea that they eat a lot of pies. Or that they're paying tribute to Dennis the Menace's pal. The town certainly holds a pie-eating championship, to which I say, well done, and I'll be sitting a few yards away feeling nauseous. For today, though, I wanted to go proper Northern, and have some proper pie in a proper Wigan pie eating place. 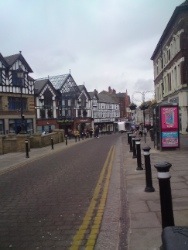 I thought there'd be hundreds of them. I thought it would be like trying to find a tea room in Devon, or a pasty in Cornwall. I thought there'd be people on the street waving photos of their baked goods at you as you passed, trying to seduce you with their crusty edges. I headed down the main street of the town, and it looked very pretty - there were some gorgeous arcades, real Victorian beauties, coming off the main street, and a thriving shopping centre. There was even a pub called The Moon Under Water, which was very tempting. After all, if there was going to be a place which embodied George Orwell's perfect boozer, wouldn't it be in Wigan? Then I spotted it was a Wetherspoons, and I realised that it was unlikely that it would be the alcoholic nirvana promised in the name. And an advert for free wi-fi didn't help add to that olde-worlde charm - I doubted it sold liver sausage sandwiches, anyway. 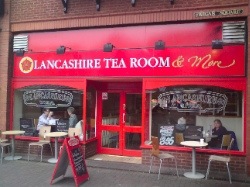 I came across this place and it seemed perfect. I mean, Lancashire Tea Room - & More. It's named after the frigging county, for goodness' sake. Inside, it was clean and modern. I went to the counter and asked for a meat and potato pie and chips.

"Do you want peas and gravy with that?"

Are you kidding? Of course I do! Give me the whole damn experience!

My tea came. There was a china cup, and a little stainless steel teapot, and it was beautiful. For all my love of beer and wine, there is nothing - nothing - as wonderful as a good cup of tea. If I end up on one of those fictional islands where you get a choice of beverages, I'll go with a teapot over a bottle of champagne any day.

Next came my lunch - or rather, since this is the North, my dinner. 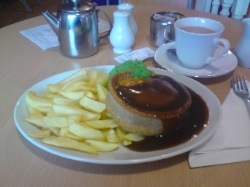 Pie. Chips. Gravy. And the peas were mushy, something I hadn't requested but which came as a singular thrill. I laid in with gay abandon.

Reader: I was disappointed. I'm sorry. This might be my own fault, because, for me, the best thing about a pie is the crust. The crunchy, hard beauty of pastry, infused with the subtle juices of the pie inside, yet retaining its own structure, and a firmness between your teeth. I like to bite down on pastry and feel it crumble in my mouth. This pie, however, was soggy and unpleasant. Part of that was the gravy's fault, but part of it was down to the way it was cooked. It felt like a frozen pie that hadn't been cooked long enough, and was still in the process of defrosting. It was wet. I just couldn't get on board with it, and considering I had come all this way expecting the ne plus ultra of pies, it was a big let down. Still, the chips were lovely, drizzled with salt to give it a tantalising tingle, and the mushy peas slipped down delightfully.

I staggered out of the Lancashire Tea Room, stuffed - I'm not used to guzzling that much food in the middle of the day. I'd thought about going to Wigan Pier, to complete the Orwellian experience, but since George couldn't be bothered going there (he says in the book that it had been demolished, which wasn't true) I didn't see why I should bother. Besides, I'd been once before, about twelve years ago with some friends from Edge Hill. We went bowling, and I embarrassed myself by leaping about like a girl when I got a strike. So I considered Wigan Pier "done". 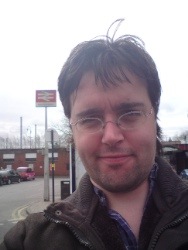 Which only left me with the seventh worst train station in Britain, Wigan North Western. After Wigan Wallgate's Victorian charms, a 1970s brick hole couldn't hardly compare. There was a very nice new multi-storey, recently built by Virgin, alongside, but the station itself is indeed a dump. What is it with the bricks made in the 1970s? Why do they age so badly? There are Victorian brick buildings that still look majestic, while buildings from the Seventies look like they've been built out of blocks of algae and despair. It's just plain nasty. Inside, it didn't get much better. I'd been here once before, about eight years ago for a training day, and they'd revamped it a bit since then. The main thing they seemed to have done was close the toilets.

I'd been to Euston and Lime Street in the preceding couple of days, so I knew what Virgin were capable of in terms of providing customer services. If this was a suburban station with a couple of trains a day, this was awful. For a station on the West Coast Main Line, with services to Glasgow and London and all points in between, it was dreadful, and completely unjustifiable.

What's worse, they had tried to make it look better by painting it lime green. 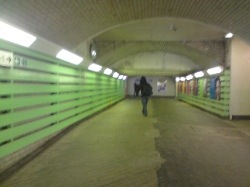 Note to any interior designers out there - lime green is not, and never will be, a colour to instil joy in all comers. It just makes you think of the 1970s all over again.

I'd been meaning to have a wander round the station, to fully evaluate its status as a bloody awful station. But I have to be honest, it was too depressing. The idea of waiting twenty minutes for the fast train was just too much to bear. I leapt on the slow train which might have taken a while to get to Lime Street, but at least it left Wigan sooner. Sorry - but my affection for all things Northern has its limits...