I'm very happy when people comment on here - it makes me feel like people are actually reading, and I'm not just talking to myself. I especially like it when readers pop up with interesting facts, or quirky items (so long as they're not smartarses, obviously).

I was pleased as Punch, therefore, when Jamie contacted me with some relics of Merseyrail past he keeps in his attic. Jamie writes the On The Ration blog, where he's trying to live within World War 2 rations for a month: while I admire his bravery, and I'm in awe of his cookery skills, there seems to be a bit too much reheated cabbage for my taste.

Anyway, following my post about the new in-car line diagrams - a high point for English literature, I'm sure you'll agree - Jamie sent me a couple of pics of Merseyrail's previous efforts in this field. The first, with its groovy red backdrop and general air of flared trousered excitement, is a Wirral Railway diagram from 1967. Dig that font, man. It's a healthy reminder of how limited the network was at that point, and how the next decade's developments opened up a barrage of new journeys and links. 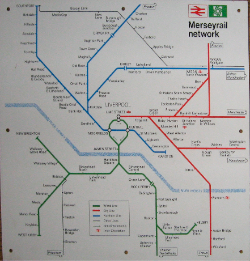 Better still is this map from 1978. First, let's deal with the head scratching strangeness of it - why on earth have they aligned it to go east-west? The Northern Line - a ramrod straight route on the present map, acting as a clean visual cue down the centre of the diagram - is forced to meander all over the place. That route to Kirkby is horrible, and look at the two oddly-placed kinks between Central and Garston. And the Wirral line is splayed in positively undignified fashion, with the river miles away from New Brighton, and West Kirby is about five miles south, somewhere around Shotton.

There are a few basic assumptions about map design, and one of them is that North is up. It's sort of okay for the Northern Line, if over complicated, but Wirral residents are very definitely short changed with their strange representation. I can't work out why they did it this way - it even creates problems for them, as can be seen at Lime Street, which has to be represented with a double circle so that the City Lines can clumsily emerge from them (compare and contrast with the simple interchange on today's map). It just looks weird.

It's still a fascinating insight into the Merseyrail that existed at the opening of the Link and Loop. The old station names (Preston Road for Rice Lane, Upton by Chester instead of Bache, "St Helens Shaw Street"). The interchange at Rock Ferry for trains south - it seems inconceivable now that you couldn't get the train from Chester to Liverpool via Birkenhead, and yet this is a very recent development. Bromborough, on its own, without its Rakish brothers either side, not to mention the absence of Conway Park, Brunswick, South Parkway and Wavertree Technology Park. (Poor Ditton, destined to vanish altogether).

And of course, the ambitions implied in colouring the lines and the future extensions - the Kirkby-Wigan line is blue all the way, because of course, it's only a matter of time. Helsby? Of course there will be Wirral Line trains heading there one day! Curiously though, one extension that did actually happen - Garston to Hunt's Cross (note the apostrophe!) - isn't so much as hinted at, though the alignment of the line seems to be pointing that way.

Lovely stuff. I'm very grateful to Jamie for this little step back in time, and if anyone else has any relics of the past, feel free to get in touch.

EDIT, 4th April: Jamie has sent me much clearer pics of the originals, so I've altered them. Now it's possible to read the Wirral Railway map - including the legend, Hamilton Square for Woodside Station. Marvellous.

They were clearly never hopeful about the Wrexham line becoming a part of the network though as it's in grey!

Speaking of the Wrexham line, have you noticed on the Wirral Line diagrams on the walls opposite the platforms in the Liverpool loop stations that the Wrexham line is in green (though much lighter than the Wirral Line's green) despite the fact that the key says that other lines are in grey (as in Ellesmere Port-Helsby). I wonder why that is when any electrification of Wrexham isn't going to happen in the near future.

There does seem to have been a lot of experimentation with the maps in those early days. I have a 1977 network diagram which is completely different again.

It's interesting to see how the map has evolved over time. The basic shape in use today has been around since the mid-80s but it has been tweaked regularly, especially with regard to how the "Other lines" are shown. I remember one barmy version around 1994 which showed Ellesmere Port to Warrington as part of the City Line.

Regarding that 1967 map, who thought that black text on a dark red background was a good colour scheme for legibility?

The Wrexham line has long been "the next big project" for MPTE, but the number of (bloody-minded) hurdles thrown in the path of the plan is ridiculous.

There's the question of how far MPTE's powers go: once over the border into Cheshire, they (used to) stop.

Then privatisation caused a huge pause in development, not least because BR went 1000 days without ordering a new train - needed to stock the line.

Safety was handed from BR to the HSE. They immediately said that no new third-rail networks should be built. Far too dangerous.

Safety was taken away from the HSE, then the government said that the "sparks effect" didn't actually exist (in the face of 100 years of evidence worldwide) and refused nearly all electrification plans.

Finally, the ever-shifting ownership of the rails themselves (BR, RT, NR, perhaps MPTE-Abellio next year) means that the price keeps going up. MPTE say they can do it for £60m, but NR want £200m before they'll even examine the programme. Even with money from ex-Cheshire and the Welsh Government, that price won't fly.

One thing that might happen is that the WAG may pay for speed improvements on the line. That could get the journey down under an hour, which would let the trains run into North again. It's still a change of trains, but it's a 7.5min service to town rather than a 15min one, which will boost custom. If another couple of sets and crews could be paid for, Wrexham could go half-hourly: a far better prospect.

The former Golden Voice of Merseyrail has just pointed out that the Wrexham electrification, along with overhead electrification to Warrington, is in the Merseyside County Council transport plans of the late 70s and early 80s, with a target completion date of 1987.

So as long as a vindictive old cow doesn't become Prime Minister and abolish the metropolitan counties as punishment for people repeatedly voting Labour when clearly told not to do so, we'll be taking fast and frequent electric trains to all parts in just -23 years!

I like the 1978 map, it's not as cluttered as the one now, though maybe there's not as much going on around Merseyrail then as now?

This Wrexham electrification saga (as well as Kirkby-Skem/Wigan?) will go on forever. I think Merseytravel should take the initiative and electrify at least within their boundaries to Heswall. It's a start anyway!

I've had spam before. It makes you feel like you've arrived, believe me.

Wrexham is one of those places - like Chester was on that 1978 map - that is so obviously a cause for electrification it's embarrassing. Warrington, Wigan and Preston all have alternative routes into Liverpool, but Wrexham is left with a substandard route which could be easily upgraded.

I remember reading that one of the key issues against electrifying it in the last survey was the cost of erecting fencing all along the line (!) - HSE having decreed that 3rd line railways should be completely fenced off from the danger of daft twats wandering onto the line. Their insistence on this cost an absolute bomb and considerably bumped up the estimates to how much it would all cost.

As I've said before, going as far as Woodchurch is a no-brainer, to me: it would be well used, have a great cost/benefit ratio, and would remove traffic from the M53 corridor. The problem is that doing so makes the rest of the line more irrelevant - stopping at Bidston is one thing, but the middle of the Wirral is quite another, and neither the Welsh Assembly or Cheshire West are going to be keen on it. While there's a double tracked route through major conurbations - including interchange with the main route from Anglesey to Chester and London - the relatively tiny amount of money should be spent making it as useful and as desirable as possible.

And gottago, yes, I spotted the different coloured lines in the stations: I think this is totally a case of whoever's in charge at the time the map goes up decides to colour it in whatever shade they like!

Understandably your article helped me very much in my college assignment. Hats incorrect to you send, intention look progressive in behalf of more cognate articles in a jiffy as its united of my choice question to read.

Up until a few years ago most of the none Merseyrail lines where coloured the same eg. blue for Ormskirk to Preston.

Sorry for my bad english. Thank you so much for your good post. Your post helped me in my college assignment, If you can provide me more details please email me.