A couple of people have got in touch with me via Twitter to alert me to a brand new permutation of the Merseyrail map: a line diagram above the windows in the trains. For years now, the trains have featured poster sized representations of the network on the wall. I'm guessing that someone at Rail House twigged that if you got rid of them, you'd have a few extra spots for advertising, and the line diagram was born.

It should, of course, be noted that the line diagram is nothing new or innovative. London Transport - and indeed most metros across the world - have been doing them for years. They're at their best when you have a line like the Jubilee or Victoria, one straight line without any branches. Once you start getting variation, it gets complex, and indeed the Tube completely cops out of trying to show the whole of the District Line on one diagram, and splits the Wimbleware branch off onto a diagram of its own.

Merseyrail has an additional problem, in that the trains used are not exclusively favouring one line or the other. They may tend towards the Northern or the Wirral, but there tends to be a lot of interworking, so a line diagram will by necessity have to show both of them. 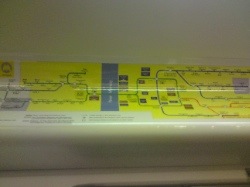 As is usual with this sort of thing, my apologies for only being able to offer you photos snapped in the flesh. Just click the smaller version for a bigger one and then squint a bit.

At first glance, they've done an excellent job in just fitting the whole thing in. Given the wide geographic spread of the network - think of the difference between Southport in the north and Chester in the south, or West Kirby in the east to Hunts Cross in the west - the fact that they managed to squeeze it into a horizontal stripe should be applauded. Though it feels counter-intuitive to have Chester and West Kirby lined up at the edge beside one another, it somehow works. And the use of the Mersey in the centre as a dividing line is a great visual marker. 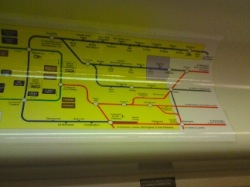 But of course, I have to criticise. I'm sorry. My biggest bugbear is the incorporation of the City Line. As the key itself notes, only selected stations are shown. The question must therefore be asked - what's the point? The City Line makes an uncomfortable fit on the map, with a really unnecessary curve between Lime Street and Edge Hill so that it can slot in next to the Northern Line, and a very nasty split at South Parkway. A simple red marker indicating that interchange with the City Line was available would have been better. The choice of stations seems off, too - the points where the lines split, fair enough, and St Helens Central earns its place as a major destination, but Garswood? Hough Green over, say, Widnes? And Warrington and Wigan are both represented by one station, which isn't true.

That odd little curve after Meols Cop annoys me too. 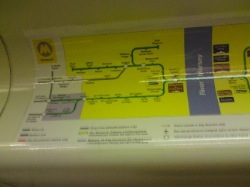 Crossing to the Wirral side, and things are a bit better. I really like the way that Chester has been lined up with Shotton and the Borderlands Line - that's a nifty bit of design. My main gripe here is that the Wirral itself isn't shown. If you follow this map, you have no idea that West Kirby or New Brighton are by the sea. Personally I'd have sent the West Kirby up towards the sea at the end, like New Brighton, and placed a blue border top and bottom so that the Wirral Peninsula was marked out clearly. It would just be a pleasing visual (though admittedly there's no indication that Southport's near the coast, either). And why are all the stations on the Borderlands Line shown, when some (Hawarden Bridge) are barely served, and others (Upton, Heswall) are request stops? This wouldn't be an issue if, say, the Kirkby-Wigan line wasn't shown as having only one station, or the zero intermediate stops between Preston and Ormskirk. Is this a way of conditioning us to see the Borderlands as a branch of the Wirral Line?

General notes: they still haven't found a way to show the Merseytravel/TrioPlus area properly. It still has a raggedy, rough area, and the colour difference between the Ormskirk/Chester/Ellesmere Port branches and the rest is too stark for me. It's still a FUCKING SQUARE in the city centre, and I will go to my grave cursing that.

The biggest change is of course the addition of tourist attractions, shopping centres and transport interchanges in Birkenhead and Liverpool. I have to admit I'm a purist when it comes to this sort of thing. I hate the New York subway's purely geographic map, and I think that the Madrid Metro map, while a thing of beauty in the way it lays out the different lines, would be a lot better if they didn't show the different parks. Imagine if the London Underground map suddenly featured the various Royal Parks - squeezing Regent's Park, at least, into the map would result in a horrible distortion.

The Merseyrail diagrams haven't gone that far (they've resisted the urge to mark Birkenhead or Sefton Parks) but there are blobs in the Liverpool city centre. My issue with these is the somewhat haphazard placing: for example, positioning the Met Quarter and Cavern Walks closer to Central than Moorfields, or Chinatown closer to Lime Street. I'd have preferred a boxout, telling you to where to alight for each attraction, perhaps in the same way that the Underground line diagrams show airport and National Rail connections. It would also help with crowd management - the drivers on Wirral Line trains already suggest alighting at James Street for Liverpool ONE, but its positioning within the "Loop" on the diagram means that it looks miles away. Removing its "physical" position on the map, and simply showing it as accessible from James Street would make people use that station a lot more than Central.

Bus stations and ferry termini are a good, logical addition, though I'd question just marking the Beatles Story at the Pier Head and not the frigging Liver Building. I mean, come on. I'd have marked the triangular ferry route in the river (which would have sneakily enabled you to shove Wallasey and Spaceport in there, too). The Soccerbus at Sandhills is marked, but not at Birkenhead Central (poor Tranmere). And it's great marking the MtoGos, but how about keeping it up to date - Liverpool Central's has been open since November, and Hooton's just got one, but neither is marked on the diagram.

It's first generation stuff, so I'm willing to forgive it. If it were a bit tighter, a bit more consistent, and the tourist/transport features weren't so clumsy, I'd like it a lot more. It's certainly a valuable addition to the family of maps, and, as I said, it frees up all that space for more adverts. Which is of course great.

The Soccerbus at Sandhills is marked, but not at Birkenhead Central (poor Tranmere)

That'll be because the Tranmere Soccerbus was withdrawn in 2008. :)

In that case a new ALF is required at Birkenhead Central! :D

Merseyrail do seem to be getting quite a bit of LU inspiration later, and I quite like it.

Don't forget that the Beatles Story is owned by Merseytravel which might be why it's made its way onto the map. Can't explain Clayton Square's presence as no-one actually wants to shop there!

They could probably do with showing which stations are fully accessible and which are not, again a la LU.

Hey Clayton Square's on the up! They're getting a Mothercare and everything.

I'd prefer them not to show the accessible stations, purely because it does clutter up the map. I agree that using LU as an inspiration is absolutely right - I'd like to see their design standards applied across the board or, at least, a style document.

And poor Tranmere again, if they can't even scrounge up a bus. Though as gottago points out, someone needs to tell the ALF department.