There's a secret map, lurking on the streets of Merseyside. It appears fleetingly, hiding at selected bus stops, cowering on the back of a few shelters, quivering behind Travel Centres. It's hidden from view in amongst Saveaway ads and that really gross poster about DNA spit tests. It doesn't appear on the Merseytravel website unless you really know where to look. 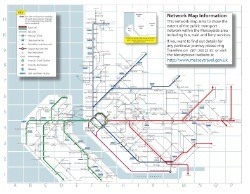 That's the worst part. It's a great, useful, multi-modal diagram which shows the interactions between Merseyside's different public transport forms: bus, train, ferry. It covers the whole of Merseytravel's area of influence. It's simple and easy to understand. And for some, unfathomable reason, it's hidden away. 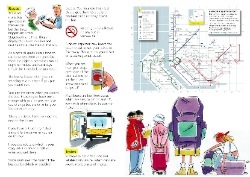 This particular example is featured on the top of page 6 of the "Welcome to Merseyside" leaflet provided in Travel Centres for tourists, though it's a little out of date: below is a more modern one from outside the Paradise Street Interchange, which also has an index. It's not featured on any other leaflet, that I can find (even though it would be as valuable for residents as visitors), and it only seems to be on certain bus stops. An unscientific poll of the dozen or so stops closest to my home didn't produce a single example (though I did find out that Kayleigh loves Stu, and doesn't care who knows it). I don't remember seeing it at any railway stations. 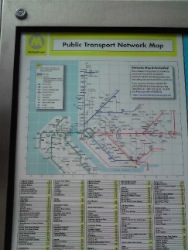 It's a great map for a few reasons. Highlighting the Merseyrail and City Lines gives the map a structure, and emphasises the importance of the rail links to the city. They're also the easiest way to get around. Note that the Wirral Line is presented as a loop in Liverpool, by the way. The purple line for the Airport Link is a key feature, and combines with the Loop to emphasise the city centre itself (the newer map goes even further and shows the new shuttle bus from Liverpool South Parkway).

Considering the amount of detail presented here, it's surprisingly clear and well thought out. What's important here is letting the tourist know that there is a bus for them. It also shows how well connected the Merseyrail network is to the bus network, though there is a bit of poetic licence - showing Liverpool Central and the Paradise Street Interchange as three interlinked circles when they're actually a good ten minutes away from one another is a bit naughty.

In some ways, this is more accurate, geographically, than the proper Merseyrail map. The Mersey is correctly shown running at a diagonal between the Wirral and Otterspool, and the Northern Line is one straight run all the way to Southport. And I like the nice triangle of the Mersey Ferry.

Complaints? Not showing the full extent of the rail services seems like a mistake; perhaps not the Borderlands Line or Kirkby to Wigan, but including Chester, Ellesmere Port and Ormskirk would show the full extent of the Merseyrail services (especially as Chester is a major destination in itself). I'd have perhaps included zone boundaries, if they could be accommodated tidily, as this map is aimed at people who are using Saveaways. And a separate colour (brown?) showing the Night Bus network would be a good addition.

But my biggest complaint is that this map is hidden away. It should be on display at every bus stop and every railway station, much like Tim Demuth's London Connections map is displayed alongside the London Underground diagram in Tube stations. Remember, famous, important Liverpool districts like Anfield, Knotty Ash and Woolton don't appear on the Merseyrail map at all. I'd like be able to stand outside, say, Moreton station, and be able to roughly work out a route to Gateacre (Wirral Line to Lime Street, City Line to Huyton, then a bus). It'd be a valuable service.

10 minutes between Central and Paradise St Bus Station?! I'd have said it's no longer than a 5 minute walk, and that's at a snail's pace!

You're right. I was taking into account my usual detour to check out the offers in Waterstones en route...

lol! That explains it all!

Total guesswork here but I wonder if Merseytravel are waiting to roll out that smartcard system they promised (on your mousemat!) before they introduce this map to the masses. They might have thought that this map implies that you can buy/use one ticket to go from say Central to James St, then get a ferry to Woodside, then get a bus to wherever. While it is possible to do this on a Saveaway or Trio ticket, I can't imagine many tourists using these tickets.

I hope the smartcard is something that we can expect in the immediate future. I always get so jealous when I go to cities like Paris, Barcelona and Stockholm where they've already got really good cross-ticketing systems (smartcard or not) while we don't. Given the fact that tourism is increasing two-fold, we could really do with a ticketing system that makes it really easy for people to buy and understand in whatever language (getting rid of all those ridiculous zones for a start would be great).

I'd love it if that were true, I really would. A smart card must be in development; Oyster's been such a huge success in London, and as you say, other cities manage it. In fairness to Merseytravel, they introduced through ticketing way back in the 70s when they built the Link & Loop. It was possible to buy tickets that were valid for the bus journey to a Merseyrail station, and also the train journey beyond. People found it too confusing and it was dropped.

You also have the problem of getting all these independent bus companies to comply, thanks to deregulation. I strongly suspect that Merseytravel might be dropping the ferry from the Saveaway to pay for the new terminal.

Smart cards are absolutely the way forward, and I think that it's actually in the franchise agreement that they're introduced. I wish they'd get on with it!

The Zones are useless as they stand because they seem so arbitrary from outside. Being based around the different boroughs makes crossing a boundary way too easy, and the Area boundaries are odd - I have no idea what area I'm in, and I'm a big public transport user! Realigning the zones so they're based around the city centre and radiate out from there. Making things easier in the new touristy Liverpool would be better.

I find this particular map baffling. Like you said, it's odd that Merseytravel (in their wisdom) failed to show the full extensions of THEIR Merseyrail network.

And it seems to me that the grey lines that supposedly show up the bus routes are there in a half-hearted way. Maybe this is because the ITA haven't any control over what the likes of Arriva and Stagecoach can do?

I like the "Gladstone Dock" destination point for the Dublin ferry. Has anyone at Merseytravel ever TRIED getting public transport to the Gladstone Dock? Car and lorry drivers only I'm afraid.

The separate area route maps are much better, if always out of date.

Deregulated buses definitely seem to be the problem with being specific on the map; it's a shame they can't have spider diagrams like they do in London.

Gladstone Dock's a piece of piss. Get off at Seaforth and Litherland then walk through the streets, dragging your bags behind you... where's the problem with that?