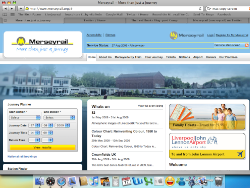 Someone at Merseyrail HQ's splashed out on the new version of QuarkXpress, and the website's been redesigned. Out goes the yellow and in comes a new calming blue colour, combined with heavy use of the new font that's been appearing on posters for the last couple of months. At first glance it's a good, professional job, and certainly more attractive than the previous one.

It's all very web 2.0. Links have been replaced with buttons; the journey planner is friendlier, and incorporates Google Maps with little M pins; and, as is legally required for any new website these days, there's a Twitterfeed. I subscribed almost immediately, and it's been interesting watching it develop over the last month or so. At first, all that happened was Twitter said "there's a problem - go to the website to find out more". That developed into "Cancellations - see website" and has now finally reached "16:58 West Kirby train cancelled", which is what you want beamed to your mobile if you subscribe to the feed. (They need to weed out some of the spam subscribers more often though).

In addition, you can put in your regular journeys into the system, and the website will specifically target you and let you know of anything special that might affect you. In addition, if you sign up before the end of September, you can win the chance to ride in the cab of a train! Wooh-wooh! I've got my fingers crossed for that one.

And there's a Rail Enthusiasts Corner too. That's where we can sit with our thermoses of weak lemon drink, presumably.

So it's all very swish and pretty. But - you knew there was a but, didn't you? - there's a few flaws that need ironing out. For one thing, the list of events on the front page doesn't actually list where they're being held, never mind which station is most convenient for them (there is a pdf which shows the features close to the Merseyrail stations, something I'm very pleased about). Some of the stations have incorrect pictures (Birkenhead North and Birkenhead Park both have the same one!). These are teething problems, and will presumably be corrected soon. My favourite part is hidden in the site map: the Calamity Overlay. Whip crack away!

I quite like the way you can view the actual posters that are displayed at bus stops outside each station. My personal favourite is Port Sunlight's. :D

I missed that - that's excellent!

I was part of the web design team.(Placement actually). I do say that it's come an AWFULLY long way from it's first design. It's nothing like the prototype I did, but I think they incorporated some designs from the MerseyFerries web site yey!. The focus group were happy with it's grey and Lemon design. However they changed it again and it looks BEAUTIFUL.Cheers for Phil Thomas

Yes HQ DOES use Quark express, but I thought that was only for the timetable brochures, not the web site.

It is a vast improvement on what was there before, don't get me wrong; I'm just picky about the odd flaw. I'm a total Princess and the Pea type person. 40 mattresses and I'll complain about the tiny pain in my back (but I'm still a Princess hehe). But the error on the first page - advertising local events without a single mention of where they are being held - I think is a pretty unforgivable error.

Quark Xpress is the only web design thing I have ever heard of, and in fact I had to Google it first to make sure I wasn't making a total arse of myself!

Overall I like the new site. The old one was looking very tired and looked increasingly awful as bits were added to it seemingly on an ad hoc basis.

"Calamity Overlay" is presumably an "oh sh1t the service is completely down the swanee" message they can plaster in big letters over the front page if necessary.

The bus timetables are good, but it's a shame they don't have also have the maps showing where Stop A, Stop B etc actually are.

It is a bit odd that the local events page is currently advertising Creamfields, which is taking place at that well-known Merseyrail destination... Daresbury.

I will take the opportunity to mention one thing which annoys me, not just about the Merseyrail site but to the web in general. Why does a redesign have to break all the links? I had www.Merseyrail.org/travelling/ bookmarked as a handy link which showed all current service disruptions on one page, but that page has moved.

Similarly, the URLs for the station information pages have changed and some poor fool is going to have to go through the entry for every Merseyrail station on Wikipedia to update the links (I am NOT volunteering for that job, by the way).

It's a bit of a nerdy moan, but it would be worth making a bit of an effort to retain the site structure with the new CMS, or at least redirect the old addresses to the new pages.

(Is the "My Merseyrail" section broken for everyone or is it just me? I can't log in and the "password reminder" link doesn't do anything)

Poor Wiki people! And I totally agree with you on the CMS thing. Well, I would if I understood it.

I can log into MyMerseyrail - are you using your whole e-mail address as the user name? I've set up a couple of journeys on there as an experiment but so far, I haven't been beseiged with updates.