It's never a good sign when the woman on the counter looks at you with confusion after you ask for a ticket. "A what?", she asked.

"A Lancashire Day Ranger ticket," I repeated, turning another shade of crimson.

"Can we do those here?" she asked her colleague, who was busy sticking down a date stamp on a Trio ticket. Two thoughts ran through my head. The first was righteous indignation: yes you can, woman, you can buy them from any station, and if you turned your eye to that computerised screen and turned on a couple more brain cells I'm sure you'd be able to find it. The other thought, running parallel with the first and occasionally overwhelming it, was: Oh God, maybe you can't get it from here. Maybe I'll have to go to Lime Street. Can I just slip away without anyone in the queue noticing? Oh God.

Fortunately her colleague had in fact received training on the computerised ticketing screen, and was able to find the Lancashire Day Ranger ticket and sell it to me. I was able to finally advance into Liverpool Central.

I'm going to pause now, for a bit of background. Over the last week I've sent out a few e-mails to some local organisations, explaining about the blog and asking for info on various different projects. One e-mail went to Merseyrail asking what was going on at Central, and if there were any artists impressions or diagrams that I could have to put up here as a point of interest. I got a lovely e-mail back from a lady in Customer Relations, saying she was going to speak to Merseytravel and get back to me (I also got something else, but I'll cover that in another post sometime). A day later, on the Thursday, she forwarded me some information that Merseytravel had provided for her, a Word document clarifying the details of the Central project. Unfortunately, Merseytravel couldn't provide her with any illustrations for "commercial reasons". Fair enough, I thought.

So I was a bit surprised to walk into Liverpool Central the next day to find this poster: 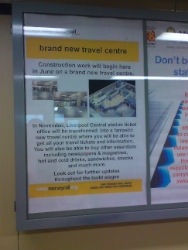 ...that is, a poster explaining about the building work at Liverpool Central and featuring artist's impressions of the MtoGo shop and an overhead plan. If you can't quite see it in that picture, here's a couple of snaps I took of the five foot high renditions on the fences round the building work: 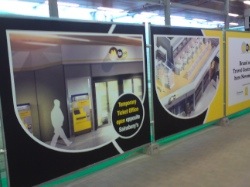 I'm glad Merseytravel overcame their fears about sending these diagrams to an interested blogger somewhere on the internet, and seized the opportunity to instead show this commercially sensitive material to the several thousand people who go through Liverpool Central every week. Bravo!

Anyway. I boarded the train to Ormskirk, and got in there about eleven-thirty. There's always been a ticket inspector here, but today, presumably in honour of the esteemed visitors to come, they were out in force - half a dozen of them, in fact. I managed to get by and headed into the town centre itself. 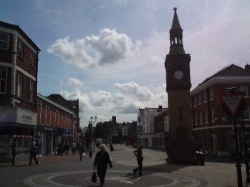 Ormskirk was experiencing that brief sigh of collective relief it gets for the period when the students are on holiday. I used to work with disabled children on the playscheme here in the summer, and so I knew Ormskirk out of term time is a completely different place. It's like the town is dusting itself down after a particularly rigorous boxing match, and is tending to its wounds, ready for the next round. I bet the pubs hate it.

I had a bit of a mawkish wander round, letting out a sigh of sadness at the empty Woolworths where I had bought GoldenEye on video, and trying to remember what used to be where there is now a Costa coffee. Mawkishness leads to melancholy, which leads to, in my current state of fragile mental health, a sudden precipitous drop into depression, insecurity and fear.

I was gripped with panic. What on earth was I thinking of, coming all this way to gate crash an official event? I'm criminally, painfully shy; I don't go to parties and talk to strange people, I stay at home and watch Coronation Street. I've been this way since I was a child, and most of the time I can just about get by, but here I was trying to introduce myself into a social situation all on my own with no-one to hide behind. I felt scared and alone, and the depression that I've been fighting the last few weeks swept over me until I was drowning in self-loathing.

I found a bench outside the registry office and phoned the Bf in work, to express my terror and to try and get some words of consolation. He was supportive, of course, and he said to me: "You don't have to go. You can turn round and come home and it won't matter."

Yes, I thought. I can do that. My legs were weak with the emotional barracking, but I managed to get up and stagger round the corner to see the station with, blessedly, a train waiting on the platform. It was 12:25, so I'd be able to slip onto the train and off before the distinguished guests arrived. 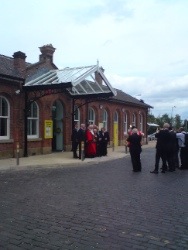 I was halfway down Station Approach, being pleasantly surprised by the new look of the station building when a whole load of photographers, dignitaries and a town crier came out for some official snaps. They were early! I froze outside, then gingerly crept forward. I could take a couple of photos from a distance, I thought, and I snapped one.

The official opening, by Sir William McAlpine, chairman of the Railway Heritage Trust, had already taken place, alongside other local notables - the Mayor of Ormskirk, and so on. Once the paparazzi shots were done, everyone went back inside to press the flesh. I carried on past the station, pretending to be terribly interested in the new cycle racks so no-one would spot me, and so that I could take a picture of the new glass porch over the entrance.

"Scott? I recognised you from your blog." It was Keith Lumley, Network Rail's Media Relations Manager, and the man who had told me about the event in the first place. I blustered a hello, and he explained that the opening had been brought forward as Sir William had to leave early. "Do you want to come inside and have a look round?"

I was still scared, I can't pretend otherwise. But Keith was friendly and open, and he took me inside the new look ticket office. I have to say I was gobsmacked by the transformation. Previously, the station had consisted of two halves. On the one side was the ticket office, and on the other was a news stand. The passenger area consisted of a corridor between the two, which lead to cramped conditions and at busy times (such as on a Saturday night), queues out the door and into the road. 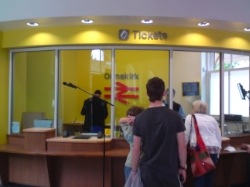 The whole area has now been opened up, and feels light and beautifully spaced. Yes, the Colour Tsars have been in, and there's a distinct yellow and grey tone to the building, but it's not as in your face as at other stations. The station successfully manages to marry its 19th century roots with 21st century needs. I particularly like the large, glass fronted ticket office. There's even a toilet now, and space for a vending machine.

Keith showed me the plaque unveiled by Sir William, then pressganged the Town Crier into having his photo taken with me. Please remember, when you see this photo, that I was recovering from an anxiety attack, was extremely embarrassed, and was slightly scared to be stood next to a man with a moustache last seen in the Coleherne c.1978: 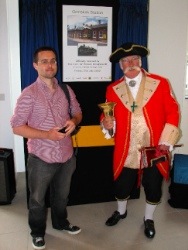 I said to Keith that I was surprised there wasn't a retail area in the station, given that there used to be a newsagent. He took me next door, to what used to be a waiting area. I'd never been in it before, as it had always been either locked up or occupied by bored teens, but now it had been stripped out and refurbished to form new commercial space. Keith explained that this space was to be rented out for what ever business wanted it: a cafe or a bar would be ideal, especially as you can be waiting for a couple of hours if you miss a Preston train. At that moment, however, it was being used for the catering, and the dignitaries were scrabbling for sandwiches and cups of tea. I felt even more out of place and gatecrasher-y, so I thanked Keith for all his help and made a getaway. (Sorry if I seemed brusque Keith - it was nothing personal, I promise you!). 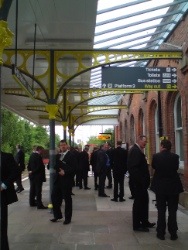 The platform area has also been refurbished, and slightly ambitiously renumbered into Platforms 1 & 2: in actual fact it's one long platform with buffers in the middle separating the electrified from the non-electrified lines. The distinctive yellow and grey Merseyrail signs are fully in evidence here, and inside the station, there are "cactus" line diagrams showing the stations available - one for the Northern Line, and one for the Preston route and connecting services. Also inside the station is a distinctive piece of wooden rafting under the roof, which makes it feel almost Scandinavian. 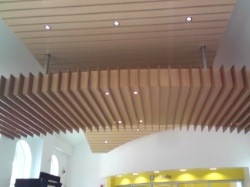 I took one last photo outside of the new, vastly improved Ormskirk station: the glass portico's new as well. It's a worthy project, done well, and all the stakeholders in the project - Network Rail, Merseytravel, Merseyrail and Lancashire County Council - should be proud of their achievement. I suspect if this had been Ormskirk station when I lived here, I'd have started Merseytarting a lot sooner. 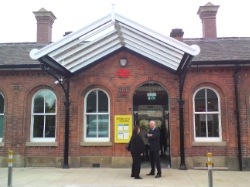 It was only as I walked away that I realised the man stood outside the station was Councillor Mark Dowd, Chair of Merseytravel: I briefly considered turning round and accosting him. But I couldn't think of any pertinent questions to ask him, and I didn't want to seem like a drippy fanboy, so I carried on. Besides, I had a bus to catch. Yes, you read that right. A BUS.

Ah yeh, the "Lancashire Day Ranger" ticket - I went in advance for one of them at Blundellsands station not too long ago, and the bloke behind the glass spent about 15 minutes going through the manuals trying to find it!

But it's well worth the money - I got as far as Hebden Bridge in West Yorkshire with a LDR. And found out Blackburn had a cathedral! Loads of fun.

Must go for a gander at Ormskirk real soon.

Costa was Birmingham Midshires at one point. Not sure if was something since then.

I knew it was some kind of building society or estate agent - thankyou!

I'm really impressed by your bravery in asking for a Day Ranger in advance. I don't dare even attempt that, as I'm sure it would turn into a scene from Scanners as the poor sod tried to process the information. I once "Crewe?" repeated to me in a "WTF?" voice at Birkenhead Central.

It's certainly worth the money, and props to Northern for producing leaflets to actually plug it.