The Edge Of Something Special

I haven't been avoiding Edge Hill, I promise. I know it seems that way, since I've done all the stations around it. 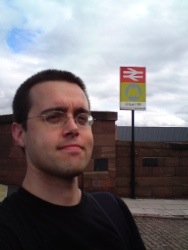 It's just that Edge Hill station is more than just another tick on the map. Edge Hill is history, real, active living history. This is where Stevenson's Rocket started from; this is where he built his first factory to construct trains. It's a vast, sprawling oasis of railway legend in the city centre, and I felt it was important that I gave it proper respect. 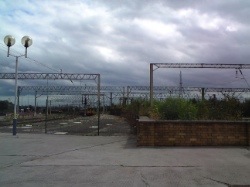 I took the train out from Lime Street, and I was the only person to get off. This is the second station at Edge Hill, dating from 1836, and as such it's probably the oldest railway station still in use in the world. It feels empty and desolate; because of its decades of use as a freight hub and engineering works, there are acres of vacant space all around you. Even the four platforms are too long, and have been fenced off at either end, leaving moss covered concrete stretching into the distance.
It's a station that is too big for its purpose, surrounded by streets that have been emptied of residents ready for a road scheme that still hasn't come. Standing there, under gunmetal clouds that threatened to collapse on me, I felt very alone. 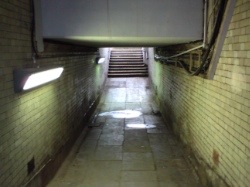 I was disappointed to see that there was building work going on. I hate it when a station can't show me its best face, and is in a state of flux. I assumed they were works to try and make it a bit more 21st Century - difficult, as the buildings are listed, but conceivable. In actual fact, it was something far more exciting.
Edge Hill is being changed into a platform for art, literally. The plan is to restore the disused buildings and to make them into arts spaces: an exhibition space in one, and a community workshop and studio in the other. It'll be changed into a destination again. Edge Hill will be changed into a place which inspires and creates, and a place for reactions. The project is intrinsically tied with the local community too, and will hopefully help to give it some focus even as the bulldozers are moving in around it.
I was very impressed, both by the idea and by the commitment of Metal (the overseers) to the project and the area. Their website can be found here, Metal; go and look at what they've already done, and their aspirations. The aim is for the reconstruction work to be done by early September, with an opening in October; I will definitely have to return here once it's completed, so that I can take it all in properly. Then I'll give Edge Hill the true fanfare it deserves. 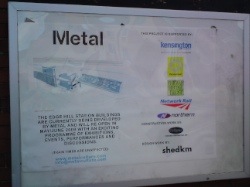 From Edge Hill, I walked into town. When I first moved to the north, GoldenEye was coming out at the cinemas, and somehow - and I don't know how this happened - but somehow I'd completely missed that there were cinemas in the city centre itself. I was under the impression that the only way I could see the 16th Bond film was to walk out to the Virgin cinema on Edge Lane, a couple of miles from the city centre. Which I did, weekly. I must have looked a pathetic figure, battling through grim and rainy weather to request my single ticket for the afternoon showing. I did it about a dozen times. (It was six years since a new Bond film had been released! I would have crawled across the corpse of my dead mother to get to it). 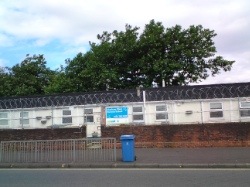 As such, I knew the Edge Lane route back into the city pretty well, so I took one of the lesser roads I'd never been down before. There were signs of the area's notoriety all around. Cul-de-sacs, though less than thirty years old, had an abandoned air to them, with grass growing wildly in the gardens. Grim faced industrial units and warehouses loomed. I walked past the most incredibly secure primary school I have seen in my life; it was like Colditz. The question is though, were they keeping us out, or the children in? I imagined feral, sharp-toothed infants clawing at the reinforced glass and clambering over the barbed wire fences, trying to ensnare passers by. 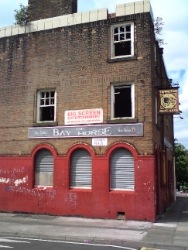 And then of course, there were the pubs - or what was left of them. Mr D, one of the readers of this blog, had told me a couple of years ago about the slow erosion of the pubs in the area, and their disappearance from the streets. The days of a pub on every corner are well gone. Speaking as a professional alcoholic, I have to say this saddens me greatly; the pub is a keystone of society, and what's replaced it? Either family pubs - oxymoron alert - or terrible dives that exist to extract as much money as possible while filling you with vast quantities of the cheapest, most lurid coloured booze. The only place this pub could succeed now is on Coronation Street. 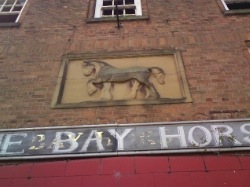 I was dying for a wee by this point. I wouldn't normally chuck my bladder into the conversation, but it was becoming quite urgent, so I nipped into the Liverpool Student's Union, assuming my youngest looking expression to try and pass as a student. I have very fond memories of this place from when I was looking at Universities as a Sixth Former. I had my heart set on Keele Uni (and thank God I failed my A-levels and couldn't go, as "the University with the highest suicide rate in the country" would definitely have caused me problems). Anyway, I came up to scope out Liverpool University with Ines, a girl in my English class who was applying to the music section. My abiding memory is of the two of us wandering round the Students Union, completely lost, and going into room after room of bars, poster sales and dancefloors, before stumbling out into the street through a fire exit. I have to admit I'd fallen for Liverpool a bit, there and then. 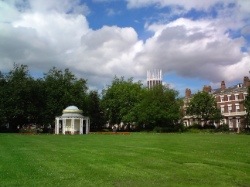 I had a sit down in Abercrombie Square after I'd cleared the decks, so to speak, and then I went off to meet my friend Mike for lunch. In a moment of gratuitous cross promotion, I'll point out that Mike has started a blog of his own on the weird and wonderful sights of Liverpool. There's a link right there on the sidebar, or, if you that's too complicated for you, you can click here.
All those dying pubs made me sad for the state of our nation's licensees, and I swore I would do my best to support them in their hour of need. Which is why I headed to the Lisbon for a pint. The Lisbon is, and always shall be, my favourite Liverpool pub, as it's gay but not too gay, gaudy but still classy, and relaxed but still exciting. If you're around Stanley Street, nip in for a pint; it's a bar that is friendly to homosexuals and heterosexuals, and has no prejudices either way. The ceiling is a listed feature, as well, and since the smoking ban you can appreciate it in all its gaudy pink and gold glory. 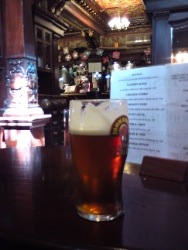 Also, it's the place where I met (a) the first boy I ever kissed, fourteen years ago and (b) the last boy I ever kissed, the artist now better known as the Bf, twelve years ago. There were an awful lot of boys in between those two, but we'll just gloss over that shall we?
Posted by Scott Willison at 22:16