Way back in December, I promised to keep you updated with regular missives on the redevelopment of Lime Street station. It sort of didn't happen, for two reasons:

I did take a few photos as the works continued, but they never came out right, or I never got round to writing about them, or I accidentally deleted them from my phone before I got a chance to do anything with them. So now the workmen have largely finished, I took a trip under the river to check it all out. 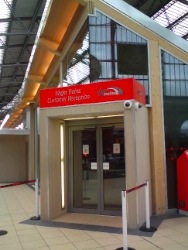 The new constructions occupy the old Cab Road for the station, and the area has been nicely tiled with limestone-esque flooring. Platforms 7 and 8 have also been blocked off with glass fencing; this leaves Platform 9 as the only one at Lime Street which is still accessible without some sort of potential ticket check (though there was no-one from Virgin checking the morning I was there).

In between 7 and 8 we've got a Virgin customer service centre, a first class lounge and a waiting room (well, they call it a "standard class lounge", but we all know what it is really). Sneaky Network Rail has also shifted the cash machines to right at the end of platform 7, so if you need some money, you're going to have to walk back past the three or four brand new retail units to get there. 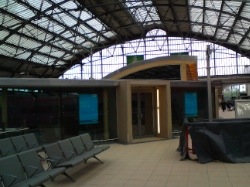 All the units are ready for letting; there doesn't seem to be any sign of occupiers yet, and I haven't heard on the grapevine any rumours about potential occupiers, but it's early days. Lime Street has the problem, as a terminus station, that there aren't a lot of people hanging around with nothing to do between trains, so the market for retail is reduced. Manchester Piccadilly's like an Arndale Centre now. It took me twenty minutes to find a platform last time I was there, and even then I'm not entirely sure it wasn't a railway-themed retail experience. Those purple Northern Rail trains look like they could be selling pick 'n' mix on the sly. 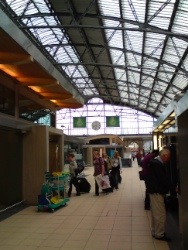 I'm hoping for a Starbucks, because I like pretentious coffee, and maybe a Pret a Manger, because I like pretentious sandwiches. Basically I like anywhere that has at least one black and white close up photograph of a mug on the wall and rocket in the paninis. However the last time a new retailer opened in the station it was a Ladbrokes, so I'm not holding my breath. 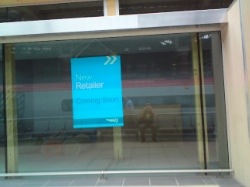 It's a nice development, well done - nothing too exciting, but it fits the location and doesn't jar with its surroundings (cf Chester, for example). My only complaint is that platform 8 gets the back view of all the shops and their metallic gubbins. There are a few doorways there, but these looked like staff entrances. Poor platform 8 people. I snapped a few photos of the empty shops, no doubt triggering a couple of alarms in the CCTV rooms. 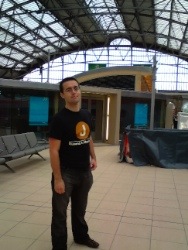 I was at the station with the Bf, as he had to go to London for work and therefore actually got to use the facilities (I'm not jealous). He insisted on taking a pic of me in the station, which I'm putting on the blog even though I'm awkwardly posed so you can see my New York Subway J Line t-shirt. Yup, I even wear metro-related clothing (I'd left my Merseyrail badge and flip flops at home). It's actually the logo for the J line which, as the t-shirt says, is "Queens to Manhattan", a camp little pun which amused me when I bought it in the MTA store at Grand Central Station a couple of years ago. (For a train station buff like myself, Grand Central Station is beyond hallowed ground; I had to be refrained from dropping to my knees and kissing the marble floor, like the Pope).

At the end of the Cab Road development, replacing the old Virgin Customer Service cabin, is the piece de resistance, the crowning glory, the climax. A new sculpture was commissioned to act as a greeting for new arrivals from That London. Entitled Chance Meeting, and sculpted by Tom Murphy, it depicts an encounter between legendary Liverpudlian comic Ken Dodd and firebrand MP Bessie Braddock. Let's have a look at it, shall we? 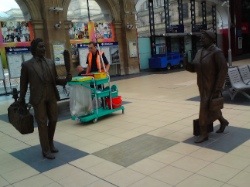 It is, not to put too fine a point on it, arse. I stood in front of it, slack-jawed, unable to conceive the circumstances under which this piece of "art" was approved, paid for and made. Ken Dodd is an unusual looking person at the best of times, and even Michaelangelo would have struggled to make him look, well, human. The best you can hope for is that children don't cower behind their mothers. But this statue makes Ken look like an over-enthusiastic janitor, proudly displaying the loo brush he just used to dislodge a particularly stubborn blockage in the third floor gents. And Beryl Reid Bessie Braddock is trying to stop him going into details about what was causing the blockage by showing him that party trick where you try breaking an egg by pushing on the top and bottom. It's a bizarre meeting of characters - I'd love to have heard left-winger Bessie's opinions on Ken's tax indiscretions - in thoroughly odd poses. I mean, the egg. 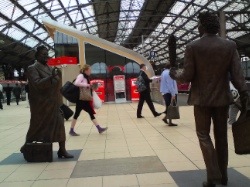 It's just not very good at all. In fact, it's so not very good, I'm actually embarrassed it's there. This is the first piece of art people are going to see when they step off the Pendolino. This is going to be their first impression of Liverpool: a city that celebrates its finest sons and daughters by making them look like idiots on train station concourses. I'm tempted to sneak in one day and chuck a sheet over it. Or perhaps I should pay for a permanent advert on that massive screen you can see from inside the station: "WE HAVE GOOD PUBLIC ART HERE TOO. JUST PRETEND IT'S NOT THERE".

Still, at least it's not the bloody Beatles again.

I know what you mean about the new passenger lounges turning their backs on Platform 8. The reason is that the info point is is manned (or should that be 'staffed' these days?) by Virgin people, there is a Virgin first class lounge, so they face Platform 7 which is where the majority of Virgin services go from.

Although Network Rail paid for the new buildings (£3.4m if my memory serves me correctly) we get it back from Virgin through increased lease costs.

Platform 8 is used by the Liverpool - Birmingham services operated by London Midland and I don't think they were interested when it was all being planned.

Re the empty retail units, there was interest from an ale hostelry (you know the one - its name is akin to atmospheric conditions and a piece of cutlery) but so far we have resisted. It's simply not the right image and there is a bar on the station already.

Moving on to Ken and Bessie - you can blame Merseytravel for that. The statues were foisted on us in a supposed verbal agreement between one of their most senior people and an ex member of our management.

Personally, I think the tickling stick looks more like one of those meat skewers you ket in a kebab house or chip shop.

As for the egg, how many people know the significance of that?

I suppose it's fair enough that if Virgin paid for the buildings, they'll get the majority of the benefits. I'm surprised that Network Rail turned down That Bar Company, precisely because there's only one pub in the whole station (and it's up a flight of stairs), but you're right that it would give the wrong impression if the first tenant to move in is a pub.

Rest assured I place the blame for the statues firmly at Merseytravel's door. The egg! Is that really all Bessie Braddock achieved in her entire parliamentary career - lions on eggs? She just looks nuts. Luckily, with them being life size, they'll get lost in the crowds...

Hey Mersey, I am sorry it has taken me this long to check out your blog. I love that you're a transit nerd/fan like myself. I was giddy to hear how you referred to Grand Central Terminal, since I don't think most people respect and admire it as much as they should. If you ever need anything from the transit museum store, let me know. I'm in there everyday. Although I don't think you're gonna do any better than "Queens to Manhattan" - I never thought of it that way ;)

oh, and regarding that chance meeting "art" you commented on, I couldn't agree more! Horrendous! And we have some awful crap like that here in NYC too- I hope, after seeing the magnificent GCT that you did not venture west to Port Authority (the bowels of transportation) but if you did, you would have seen similarly awful 'art'.

See? That artwork looks bad from 5000 miles away! That's how bad it is!

Thanks for checking out the blog Sheryl - I've been really enjoying your birthday week and all your commuting stories for a while now. GCT is like a temple for me - I've been to New York three or four times and every time we have to go visit it so I can take it in. It really is the most amazing, beautiful building there is. Don't tempt me with the MTA store though, because once I start in places like that, I can't stop!