Merseyrail flip flops. Sorry, I had to start with that, because, ladies and gentlemen, I'm now the top result for that particular Google search, and I want to keep it that way. Haha! In your face, Liverpool Echo!

It's also vaguely relevant as that was the post where I talked about the Merseyrail key ring I'd received as a kind gift of their publicity department. That key ring was a tiny rubber version of Merseyrail unit 508 110, and I mentioned that I now had a sub-mission to find that particular train and get a picture of myself in front of it. Possibly grinning and sticking my thumbs up.

However, I received a message from a person who wishes to remain anonymous. I've chosen to call him Deep Throat (as an homage to the Watergate informer, not Linda Lovelace). He instructed me to meet him in a secluded corner of an underground car park, where water dripped from the ceiling and rats scurried in the shadows. I attended of course, because I've never knowingly turned down an assignation with a random stranger, and there he passed over a brown Manilla envelope. I didn't see his face - the shadows were too dramatic and moody - but I got the hint of a distinguished profile, and caught a smattering of expensive aftershave.

Deep Throat's envelope contained a photograph. He hissed, in a voice that was so husky it made Christian Bale sound like Joe Pasquale, "508 110 is actually the one that has been used for all of the publicity material for years and years, being on the cover of timetables and anything else produced. It was even the first of the completed refurbished vehicles and had to go back as it had several experimental features that were not used, so had to be removed from this one, to make identical to the rest."

I couldn't resist. I didn't want to antagonise him, but I had to know. "What kind of experimental features?"

Deep Throat took a long deep drag on his cigarette. I glanced nervously over my shoulder, as we were in an enclosed space and therefore smoking is illegal. I was risking a fine, and possibly catching lung cancer through passive smoking. Like Roy Castle, but without the trumpet. He didn't seem keen to step out of the shadows as he whispered, "Have you got the book by T B Maund ... Merseyrail, The Inside Story?"

"Of course," I said. "Not to hand, obviously. We're in a car park. My copy's at home somewhere... Unfortunately I'm not sure where. We're rearranging the books in the study at the moment. It's very exciting actually; fiction will be arranged alphabetically by surname, while I'm hoping to use a modified version of the Dewey decimal system for non-fiction -"

"Enough!" he rasped. He took a long, slow lungfull of cigarette; I heard the paper crackle. "The front of the train was much more yellow than became the norm..."

A squeal of brakes, and a Ford Focus was behind me. For a second Deep Throat was illuminated, but he threw a hand up over his face to protect his anonymity, then vanished into a fire exit. He was gone, and I was left with a picture and no further clues. 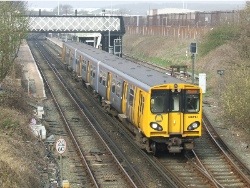 Here it is then; the famous train, pictured at Birkenhead North. I'll continue to hunt for it, but at least I now have sight of my quarry. It will be mine.

Email ThisBlogThis!Share to TwitterShare to FacebookShare to Pinterest
Labels: 508 110

I enjoyed that post! It made me chuckle. Especially the bit about cataloguing the books.

Incidentally, a Google search for "attractive local feature" brings your blog up in 3rd position.

Sadly the bit about cataloguing the books is true.

I don't think I should have admitted that.