After my Ormskirk opening, I found myself taking a bus to Parbold. I'd promised to go and see my friend Jennie, who lives there, and my original plan had been to take the train to Burscough Junction, walking to Burscough Bridge and getting the train from there. Another couple of stations off the list.

The scrum at Ormskirk made me want to get out of there as quick as I could, though, so I dashed to the Bus Station. The Council rather grandly calls this a Bus-Rail Interchange, because there's a path connecting the two, which I think is stretching it a bit. The path actually used to be a siding; until the rationalisation of the station, when it was cut down to a single track, the pathway was where the electric trains would end up. In the original 70s plans for the Link and Loop, planning permission was granted for a brand new station which would have actually connected directly with the buses and been right in the centre of town; like so much else to do with the grand plans, it went out the window when budgets were slashed.

Still, a bus! Woo-woo! Bit of variation there. I can't remember the last time I bought a bus ticket. When it turned up, it was one of those little minibuses, which was a let down. No shiny double-decker or bendy-bus for me. Worse still, it was run by a company with the unfortunately spelt name Cumfy Bus. It rolled through the lanes of West Lancashire at a frankly alarming pace. The driver didn't seem at all keen on stopping. There were people at stops on the way past, but he just whizzed by, as though they were street furniture.

I was miles away, enjoying the scenery, when there was a ding! from the bell and we started cruising to a halt. With a jolt, I realised that we were actually stopping outside Burscough Bridge station itself. Instinct took over: I sprang off the bus, right behind a pencil thin student with an air that could only be described as "waspish". 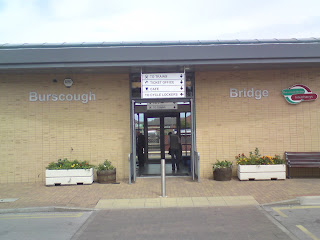 Again, this isn't just your bog standard railway station: heaven forbid. This is the Burscough Bridge INTERCHANGE, because stations are so 20th Century, man. Stick a bus stop outside and suddenly it's a multi-modal hub. 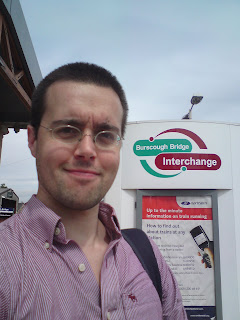 Funnily enough, if various people get their way, it might end up being a proper interchange again. The Ormskirk Branch Line crosses the Manchester to Southport Line in Burscough, but there's no interconnection between the two: the tracks were lifted decades ago. However, the path of the tracks has never been built on (as you can see on Google Maps), and so could be reinstated at some point in the future. Lancashire County Council and West Lancs District Council are both keen for them to be restored; same goes for Merseytravel, but to a lesser extent. Reinstating the curves would mean having to electrify beyond Ormskirk, to Burscough Bridge at the very least and possibly even on to Southport, and who's going to pay for that? Once you cross the county border, things start getting complicated - it's to Lancashire's advantage to rebuild the curves, but Merseyrail are going to be running the trains over it, and they've already got a line to Southport, ta. Maybe, one day, but don't hold your breath. (If it were up to me, I'd electrify to Preston instead of Southport, and build a brand new station at the point where the two rails cross with a car park for commuters, but that's just because I've played too much SimCity 4). 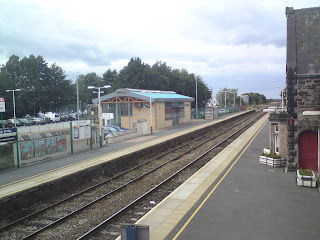 There are two station buildings here. The current station building is a modern, glass and brick affair, which has a delightful retail park Pizza Hut vibe. Inside there's room for a cafe, but it looked like it was closed for good. This isn't surprising, as right behind the station is a Tesco superstore with a cafe of its own. I'm guessing that planning permission for the superstore was conditional on them providing a new station building. 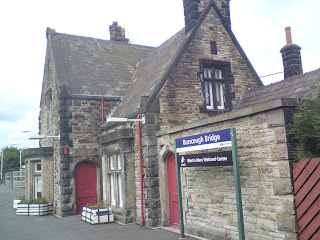 On the opposite platform is the original station building, converted to a house and now up for sale. A poster in the window with a floorplan showed that it was "spacious", but since your front window is regularly used as somewhere for people to rest their arses while they wait for their train, it's not perfect.

And also on the platform: after all this time, an Attractive Local Feature board! Well, a quasi-ALF, but it's been so long since I saw one I was quite happy to snap a shot. It could do with a bigger, more interesting bird though. I texted Jennie that I was at the station and would be in Parbold in about fifteen minutes. 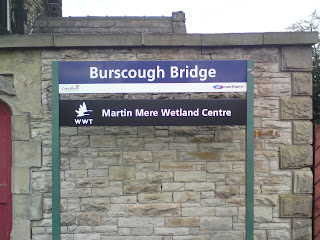 The train arrived, and travelled through the flat plains of this part of Lancashire towards Manchester. There are two trains that run this route, the fast one and the slow one which stops at all the stations en route, and as we slowed down outside Hoscar I realised I was on the slow one. I had an agonising few moments. I'd promised my dearest closest friend, and her delightful child, my Godson, that I'd be at her house in fifteen minutes time. On the other hand, I could jump off the train here and collect the as yet untarted Hoscar station, then walk the mile or so through the country lanes to Parbold. I had my OS map with me so I could easily find my way. What to do? What to do?

You thought I'd get off the train didn't you? For shame. I'm disappointed in you. It was very, very close, and to be perfectly honest, if I hadn't had that anxiety attack in Ormskirk I probably would be showing you a picture of my beaming mug under the Hoscar station sign. But I was tired, and what I needed was a cup of tea and a sit down. So I stayed on the train and continued to Parbold.

For this violation of the rules, the Gods of Merseytarting threw down a punishment, and made me look like an arse in front of the station sign. The problem with the screen on a mobile is you can't quite see the details until you get home and download it. Next time I go, I'll try and get a proper one. 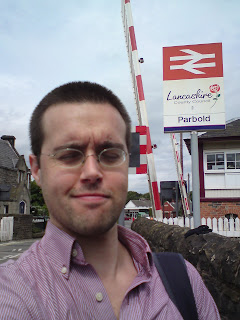 Parbold, incidentally, is a lovely little village. It's the point where the railway and the Leeds & Liverpool canal coincide, and this means that it's popular with walkers and cyclists, as well as commuters for Manchester and Southport. There's an interesting mix of old and new buildings, including a windmill (without any sails) and a couple of good pubs. Even though it's fairly large, it still has that villagey feel, and I always enjoy coming here. Go and visit on a Sunday, and take a stroll by the canal. Be sure to visit Yours Is The Earth, the cafe there; it's run by someone I was at college with and his girlfriend, and the food and coffee there is delicious. 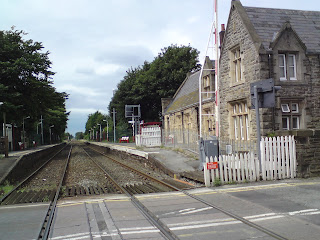 The village is bisected by the railway, and so grinds to a halt whenever a train goes through the level crossing. There's a subway for pedestrians, and again, kudos to Lancashire County Council: this too has been refurbished in recent years, as has the station building. 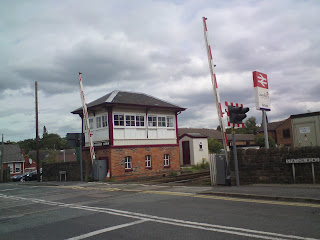 There's also still an old fashioned signal cabin here, which only adds to the olde-worlde village atmosphere, particularly since nearby is a Women's Institute.

I trotted off to Jennie's, where I was fed with home-made chocolate cakes and tea and we shared scurrilous gossip. Her son Adam and I also built this amazing Lego construction, as you can see. It's a house, with a bridge over the road to allow cars to pass underneath. To be honest, the main reason I go round to visit is for the Lego. The rest is just a bonus. 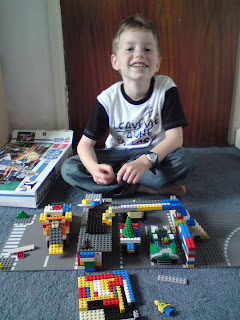 Really, to get the proper value out of my Day Ranger, I should have gone home via Wigan or something. It was six o'clock though, and it was raining, and I'd had a long, exhausting day (I spent most of Saturday in bed recovering from my exertions). So Jennie dropped me off at Ormskirk station, and I Merseyrailed my way home, breathing in the pungent aftershave of the men headed for a night out in the city. I presume their plan is just to stun the females into submission, like mustard gas in the First World War.

A strange day; a day of memorials to the past and celebration of futures, of building new stations and building Lego houses, a day where I'd gone from an absolute low to a chocolate cake-fuelled high. Another two stations down though, and my first on the Manchester to Southport line - a good start.

The train from Ormskirk to Preston is a one carriage train and usually fairly quiet. So if you'd have waited at Ormskirk station, it would have quietened down.
The Stagecoach 2a from Ormskirk to Preston via Burscough is a double decker (new) and pretty good :)
There is no cafe in the Tesco by Burscough station either by the way.
The Burscough station building up for sale is on Rightmove, and I think, although am not sure, but think there are pictures if you want to nosey.....