Here's a fact for you: I've been using the internet for about fifteen years now, and in that time I've chatted to many, many people on here. But at no point have I ever met someone off the net. A combination of my extreme shyness and a fear that the other person was an axe wielding psychopath has meant that my online relationships have remained online.

However, the many pleasant and knowledgeable comments I've received from you, constant readers, have made me think that perhaps not everyone on the net is a lunatic. That in fact, some of them could be normal. Even human. So when Robert, long-time reader and correspondent, suggested we should do a joint tart, I thought, "why not?" 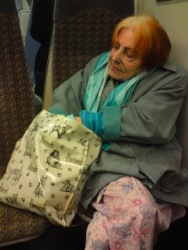 We arranged to meet at Lime Street on a Saturday that was positively balmy. I got my usual train from Birkenhead Park, and sat down opposite a pensioner who was reading a book with the intensity of a woman whose glasses aren't strong enough. Her hair was bright red, an intensely shocking ginger, but when she leaned forward I saw she had a line of white roots either side of her parting. I was wearing a black t-shirt with Praha and a tank on it, and somewhere around Hamilton Square she suddenly said, "The 'Praha' on your t-shirt. Does it mean Prague?"

I said yes, at which point she leaned even closer and said, "Are you Czech?" I thought, oh dear, Daily Mail reader alert. She's going to berate me for coming over here and stealing all the jobs. I said no, it was a gift from someone I knew who went there, and her face seemed to drop slightly. She told me that she had studied in Prague before the war, and learnt Czech while she was there. "Then, of course, the Germans came," she said, and her eyes drifted a little more. She smiled, and turned to look out the train window. I don't know what she was seeing in the black of the tunnel. 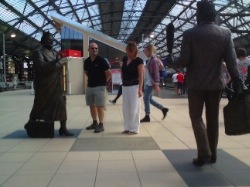 I'd arranged to meet Robert by the dreaded Ken Dodd/Bessie Braddock statue, but as usual I was hopelessly early. It meant I got to see people interact with it, and it seems that it's a lot more popular with the public than with me. People seemed genuinely pleased to see Doddie, though few of them seemed to know who Bessie was, and I don't think anyone knew why the hell she was showing him an egg. The tourists posed with it, stood between them, pretended to take Ken's bag for dozens of photos: all across the world, people are going to be unveiling holiday snaps of their trip to Liverpool and asking, who's that geek in the t-shirt sitting behind?
Most disturbingly, a good few of the male passers-by seemed to want to stroke the head of the Diddyman in Ken's bag. You don't have to have a degree in Freudian psychology to get phallocentric ideas about that.
Robert arrived at one o'clock, bang on time, which was unfortunate as when we'd arranged to meet I hadn't realised that the train to Wigan left at 13:01. We now had a half-hour's wait until the next one. What can you do in such a situation? PUB! 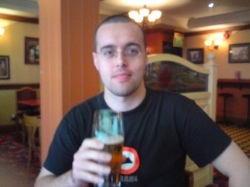 We went to Coopers, above the concourse, where I paid more than six pounds for two pints of beer. I nearly passed out. Am I cheap, or should I just go to the pub more often? Anyway, we killed the time by drinking, which is handy for me as I was still nervous. This is no reflection on Robert at all; it's just me being shy and needing alcohol as a crutch to help me relax. I showed him how to operate my camera phone, so that he could be the day's photographer, and then we headed downstairs for the train. 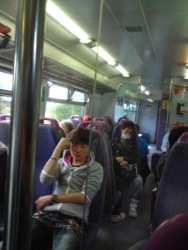 One of the reasons why I was glad to have Robert around was that he actually knows about trains. He was able to tell me the exact type of train we were on; unfortunately, I forgot to write it down. so you'll have to take my word for it. We were surrounded by a mass of Japanese tourists, one of whom was wearing a masko to avoid catching anything unpleasant from his fellow passengers. I wondered why tourists were headed for Wigan - big fans of George Orwell, perhaps?

As you can see, I was filled with unbridled joy at finally reaching Prescot. 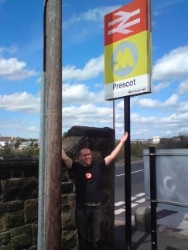 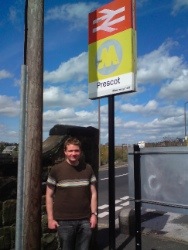 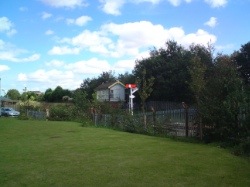 Pleasingly, there's a signal cabin at Prescot, along with an old-fashioned semaphore signal. I assumed it was there for heritage reasons, and that the actual signal would be something hi-tech involving LEDs, but Robert assured me that semaphore signals were still in use all over the country. We British really have to be dragged, kicking and screaming, into the 21st century don't we?

The original plan had been to go into Prescot town centre itself, and from there to the next station. The landscape around the station was so disheartening, however - waste ground, building sites, and a bog standard retail park - that we decided to skip its charms and take a shorter route to Eccleston Park. I'm glad we did, because we came across this sign en route; not only does it defy The Colour Tsars by having an incorrectly coloured "M" for Merseytravel but, even better, Robert pointed out that it wasn't even the right font. In fact, it was actually the logo for the West Yorkshire Metro, only in yellow. We shared what may possibly go down in history as the nerdiest chuckle ever over that. 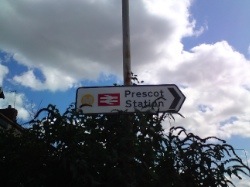 The route to the next station was through Prescot's suburban streets, soundtracked by the hum of lawnmower engines and smelling of charcoal briquettes warming on barbecues. The sun was warm, the skies were blue, the company was good; it was turning into a great afternoon.

There was a dark cloud on the horizon however, as we had a minor scuffle over the correct spelling of Eccleston Park. I maintained that it should have an "e" on the end, like Christopher Ecclestone; Robert said he didn't think the Ninth Doctor had an "e" on the end of his name, and then went on Google on his mobile to demonstrate that he was right. I still maintain that I spell it the correct way, and that Christopher Eccleston, Eccleston Park, and anyone else who spells it without an "e" is completely wrong.

Fortunately, before we could come to blows, we were distracted by a car sticker that knocked the breath from our bodies. Car bumper stickers are, without a doubt, exclusively used by imbeciles and dick heads; who takes a £10,000 car and thinks "that would look better if it had a square of laminate with a bad joke whacked on the back". This one said, and I quote, "I'd Rather Be At A Rick Astley Concert". 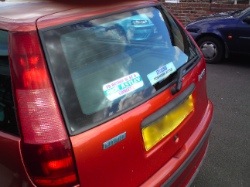 (I've blurred the registration number to protect identities). Now, I'm no music snob. Never Gonna Give You Up is an undisputed classic, and I have a great deal of fondness for his other SAW hit, Whenever You Need Somebody. But I'm struggling to think of a situation in 2009 that would be so bad, you would rather be at a Rick Astley concert. Up before a firing squad? Toilet cleaner at Glastonbury? A Coldplay concert? 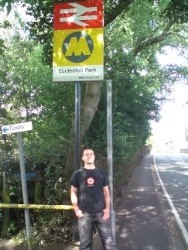 This sight may have scrambled my internal compass, as we took a wrong turn shortly afterwards. That wasn't so bad, as it meant we got to see the amusingly named Two Butt Lane, but it did mean that we missed the train at Eccleston Park and had to wait a quarter of an hour for the next one. That wasn't so bad though, as the station was nicely situated in a cutting, surrounded by cooling trees, and we got a sit down. The station buildings were on the Liverpool platform, painted grey and yellow, of course, and came from the school of wooden architecture. 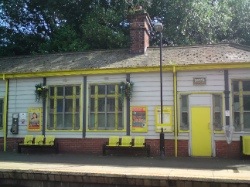 On the train, I explained to Robert that we were going to have to work fast at the next station, Thatto Heath. There was a four minute window between the Wigan train arriving, and the Liverpool train departing, and in that time we'd have to get from one platform to the other and snap a photo of the sign in the meantime. 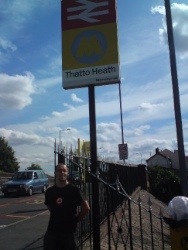 We dashed off the train, up to the street, and I positioned myself in front of the sign. Robert, bless him, was the professional, and tried to get a decent shot that wasn't washed out by the sun, even standing in the road. I was more worried that we'd miss the train. We did have to run down the ramp, but that meant we got to do a melodramatic leap into the carriage. I love it when there's a bit of excitement.

We headed back into town for a pint or two (it was six pounds there, as well. I really don't get out enough) and then Robert had to get going. It had been a fun day, and we'd both enjoyed ourselves. We promised to do it again soon and, as a parting gift, I took a final pic of him in Moorfields. It's a bit blurry, unfortunately. Did I mention we'd been in the pub? 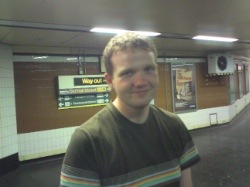 EDIT: Robert has been in touch and kindly provided the details of the trains we boarded, the details I asked him about while we rode around but forgot to write down because I am an ignorant sod. Huzzah!:

The train we actually got to Prescot was a Class 150/1 Sprinter, then the one we hopped on from Eccleston(e) Park to Thatto Heath was a Class 150/2. These are two subclasses of the Sprinter family which are mechanically identical but have a different seating layout; the 150/2s have corridor connections at each end of the train, not just within the unit as the 150/1s do.

It was a great day, and it was excellent to meet you in person at last (if you need a metaphorical crutch to help you relax, I usually need a wheelchair).

G’day from Australia, I’m Andrew, Roberts friend. Had a good laugh at reading that, but oh how I wish It was six pounds for 2 pints here (It’s about £9!!) We may have beaten the convicts in the Ashes last night but it feels like my wallet has been burnt to Ashes!

PS Try the Crown by Lime st st next time - only around £4 for 2 pints!

£9 for two pints? I'm surprised Australians aren't more sober. I think that would make me teetotal...

Sorry to disappoint you about the spelling of Eccleston(e) but according to 'The Directory of Railway Stations' by R.V.J Butt (make that Three Butt Lane), the station opened in July 1891 and has always been without the 'e'.

No! I'm ALWAYS right and everyone else is wrong, otherwise there is something wrong with the universe!

Something IS wrong with the universe. I blame that Large Hadron Collider.

I've never seen Prescot or Thatto Heath on the map, it's funny because I've watched the merseytravel map loads of times.